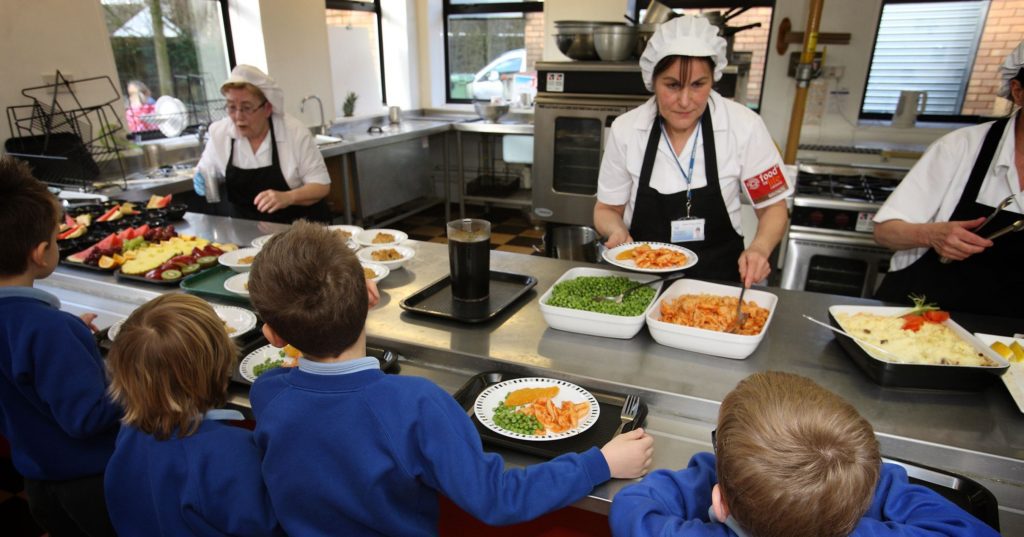 In other words, this beleaguered nation, at the time being hammered by Stalin, chose to invest in its upcoming generation, through providing free, nutritious meals for all, to support their learning, well-being and development.

Nothing fancy, you understand. Porridge, bread, milk. But every day, to everyone.

Here in Scotland, the penny has nearly dropped. North Lanarkshire Council, surveying the ruins of a failing neoliberal economy and its austere flip-side, has come to the conclusion that leaving children to go hungry for days on end, to the detriment of their health and education, is actually not good enough.

Starting this Easter, they have committed, if the pilot programme goes well, to providing free lunches to all those children currently in receipt of free school meals, throughout the holidays, amounting to an extra 175 days a year.

Thanks to the slashing of benefits, the drive down of wages, and the general incineration of lifeline services and safety nets, more and more children are experiencing “Holiday Hunger”—that is, going without food during the school holidays, because their parents or guardians don’t have the means to provide them.

Thus, increasing numbers of pupils return to school tired, under-nourished, and about as far from being ready to learn as it’s possible to get.

Research reports parents going without food themselves in favour of their kids, and increased pressure on food banks. But these aren’t enough, and we need a systematic approach, to ensure that in this small, wealthy nation, we don’t forget about those who are literally starving.

Frustratingly, the SSP has been touting this simple, progressive idea for 17 years now, tabling a bill in parliament that was, thanks to Labour and the Tories, snuffed out, and tabling a second, that was timed out by parliamentary procedure.

But the ideas we promoted then — inspired by Finland, and by the mountains of research that underlined in big, inky marker that this was a good idea and would definitely work and also be cost-effective — take root.

Unfortunately, at first, this led to waste-of-time initiatives like healthy eating phone-lines, for all the world as if children were going hungry because their daft parents just didn’t realise they were supposed to feed them actual food.

But it also led to the introduction of free school meals for all children in primaries 13, and to this latest venture, Food 365. And about time too.

However, a very important part of the SSP’s campaign, which was supported by the Child Poverty Action Group (CPAG), Unison, the Poverty Alliance, the STUC Women’s Committee and the British Medical Association, was to tackle the stigma associated with any kind of free provision.

We said that free school meals should be provided to ALL children, as in Finland, to ensure that everyone is on a level, and no one is singled out.

In Finland, this led to over 90 per cent uptake, to children from a wide range of backgrounds sitting round a lunch table together, eating the same food, talking and sharing.

It teaches them social skills, table manners, breaks down societal prejudices, and, because the food is good, cooked at school, and made from local ingredients, provides a blueprint for good nutrition in the future. But no! Alas, in the interests of free market dogma perhaps, or just to avoid agreeing with the SSP, the Labour party in particular sticks to its ‘principles’ of means-testing.

We should not, they say, be supplementing middle-class families who can afford to pay.

Hmmm. Let’s take this apart. The principle of universalism, for instance with regards to the NHS, means that everyone benefits, including the people whose taxes pay for it! That’s how universalism works, and why people from across society support it.

When you ask people to pay for something from which they will not benefit, in other words, which will supplement the alien poor, you get resentment, a two-tier system, and that old rat, stigma.

John Dickie, of CPAG, warns: “Every effort should be made to avoid the risk of stigmatising holiday provision, for example, by making sure it is open to those who pay for school lunches too, and isn’t promoted purely as a feeding programme.”

Exactly! A soup kitchen for kids is not something we should aspire to; we can do way better than that, ensuring all children feel valued and part of society.

Good nutrition for all our children isn’t expensive, not compared to, say, renewing Trident, or bailing out the banking system. Plus, despite all the hand-wringing, we are a rich country, not a poor one.

We have resources, from oil-fields to agriculture to industry. If Finland could afford it in 1943, we can afford it in 2018, that’s for sure.

This article was previously published in the Scottish Socialist Voice – issue #504. Paper and digital subscriptions are available here.