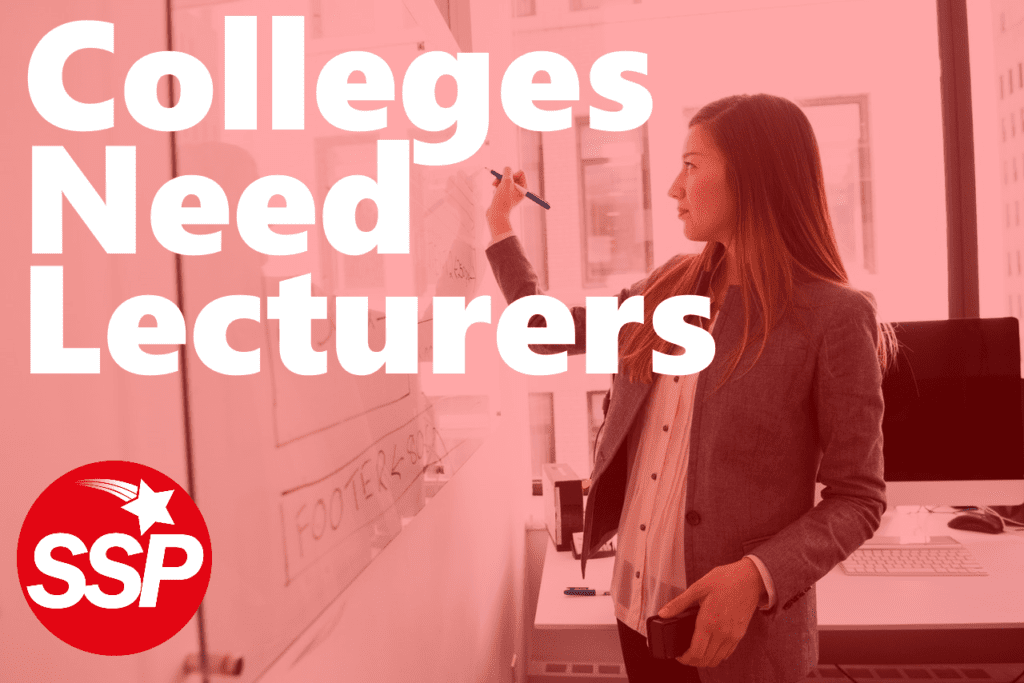 Lecturers in Scotland’s Further Education colleges have won an important victory that should boost the fighting morale of all workers, as we square up to the worst assault on pay, conditions and jobs for many years.

Overpaid FE college bosses were hell-bent on bypassing hard-won national terms and conditions produced by previous strike actions, as they charged ahead in a race to the bottom of the wages league.

CLICK HERE: RICHIE VENTON spoke to some of the EIS-FELA activists at the heart of this victory about their views of what and how they’d won.

Starting at Forth Valley College, they replaced lecturers with instructor/assessors on £10,000 a year less salary and near-zero preparation and marking time, threatening the quality of education on offer to the overwhelmingly working-class students in the FE sector. In fact at Forth Valley, the lower-paid posts were filled by 25 former lecturers, bludgeoned into savage pay cuts with the blunt instrument of fire and rehire – the new virus spreading throughout workplaces in Scotland and the UK.

Through escalating strike action, most recently 3 days a week, and a tenacious campaign that combined industrial with political action, the EIS-FELA union has now conquered the employers’ resistance and forced them into ratifying a settlement which fully recognises that a lecturer is indeed a lecturer – and should be paid a lecturer’s wage, guaranteed adequate lesson preparation and marking time and continual professional development.

In essence, the deal reached puts a stop to the replacement of lecturers with low-paid support staff on horrendously stressful conditions of work. Now the task is to force the intransigent Forth Valley College bosses to honour that deal and reinstate the 25 lecturers to their rightful job status, terms and conditions.

This is an all-too-rare victory for workers, rich in lessons for other struggles.

First and foremost, “the difference is striking”, to quote the phrase often used during this battle, to highlight the importance of taking collective action to gain results. Strikes work when well prepared and courageously executed, with the maximum involvement of the membership.

Secondly, there should be no Chinese wall constructed to separate the industrial and political aspects of any workers’ struggle. This battle – under the slogan #CollegesNeedLecturers – was conducted in the run-up to the general election period, which afforded the Union an opportunity to put relentless pressure on all political parties and candidates – including the outgoing government and First Minister – to come out of hiding and declare which side they were on.

For months the Scottish government stood silent whilst college principals and their employers’ association, Colleges Scotland, tried to demolish national agreements which Scottish Ministers themselves had helped broker during previous strikes, three or four years ago. They displayed shameless hypocrisy by rightly criticising British Gas for use of fire and rehire against its workforce, whilst saying absolutely nothing about use of the same obnoxious weapon by College bosses over whom the Scottish government has far more control than they do with private sector bosses like British Gas.

It was only after they were targeted in social media, and during election hustings, that the SNP government and Nicola Sturgeon herself began to relent in their studied silence. And undoubtedly they will have instructed Colleges Scotland bosses to concede the union’s demands, as they observed growing revolt and desertion amongst former SNP-voting lecturers and their allies.

A priceless aspect of the EIS-FELA campaign is that it’s led almost exclusively by people actually on the job, as opposed to remote, aloof full-time Union officials who in many unions do not feel the same imperative to take up the cudgels and stand firm in the face of the employers, because their livelihoods are miles removed from those of the workers affected. For instance, all bar one of the negotiating team are themselves lecturers.

As John Kelly, the EIS-FELA national salaries convenor says in the interview linked below, the solidarity of other workers was an invaluable, irreplaceable asset in winning this battle against a crusade to rob wages.

John and others heavily involved in EIS-FELA branches would be the first to acknowledge that a constructive part was played in building that solidarity by the Scottish Workers Solidarity Network, which systemically broadcast the strikers’ #CollegesNeedLecturers message to try and help break down the mainstream media’s wall of silence, and coordinated messages of solidarity from trade unionists and union branches.  The Network combined with the Union itself in orchestrating political pressure on the politicians as they hunted for workers’ votes.

The Scottish Socialist Voice and SSP gave these workers platforms to help popularise the #CollegesNeedLecturers cause amongst fellow workers, and forged links between EIS-FELA activists and other workers in struggle in the NHS, railways, British Gas, BT and elsewhere. The recent, well attended Voice Forum, with John Kelly amongst the panel of workers speaking, was one example of socialist solidarity with those in struggle.

At the most recent meeting of the Scottish Workers Solidarity Network I recall making the point ‘workers need a victory’ to break the logjam, as we planned how best to assist those in dispute to score such a victory.

Primarily through the courageous commitment of EIS-FELA members themselves, who have lost wages short-term in order to protect them long-term, but with the help of others across the wider trade union and socialist movement, we now have such a victory.

This outcome could help scupper the defeatist arguments of far too many Union leaders that ‘the members won’t strike’ or ‘there’s nothing we can do about it’.

Of course, strike action is a last resort for any worker and does not drop out of the sky but has to be thoroughly prepared and built for and then executed by a leadership prepared to go all the way.

One simple lesson is that strikes do work; that the difference is striking. And that struggle and solidarity go hand in hand, and in turn are the foundation stones of the socialism we want to construct.

A socialist future where workers’ pay and conditions, and the education of the working class majority – at any age, regardless of income – are amongst the core values and priorities, rather than inflated salaries for a few College principals and the profits of big businesses which deny society of the funds required to enhance the quality of education accessible to all.

Celebrate a victory, and feel emboldened in the many other battles we face as a capitalist rich and their pet governments try to impose their new abnormal.

CLICK HERE: RICHIE VENTON spoke to some of the EIS-FELA activists at the heart of this victory about their views of what and how they’d won.