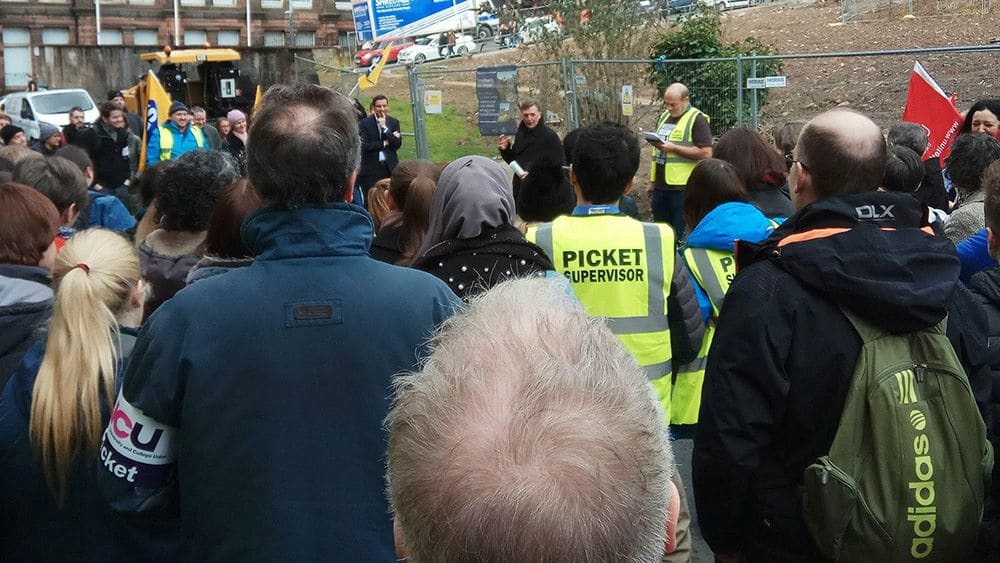 “No capitulation!” “Reject the deal and sustain the strike!”
That was the angry message from the ranks of striking university staff to their own UCU union leadership after a “deal” was declared in the first real day of talks with university bosses, sponsored by ACAS, on the night of Monday 12th.

Strikers – comprising lecturers, research staff, librarians, IT and other student support staff – were a mixture of flabbergasted, bitterly disappointed and absolutely furious on hearing (on Monday night) that the UCU negotiators wished to accept an offer that still meant savage cuts to pensions, despite increased pension contributions by staff, a lowered cap on Defined Benefits for the next 3 years… and then a renewed ‘review’ three years hence. Pickets told me of numerous examples where staff originally facing a 48% cut to their pension now would lose “only” 38%, or 42% instead of 52%. No wonder they were furious at the suggestion they should accept this as a done deal.

All the strikers I’ve met saw through this as a plan to renew the bosses’ assault on pensions after getting the mounting strike action called off. And to put the tin hat on it, the agreement which the UK union leadership advocated, and portrayed as if it had already been agreed – with the intention of cancelling the strikes from Wednesday 14th onwards – included a clause that lectures cancelled due to the first 11 days of strike action would have to be rescheduled… without a penny being paid to lecturers for doing so!

In other words, free labour to aggravate the loss of wages which the strikers were compelled to suffer by the brutal intransigence of the UUK university bosses in the first place!

Strikers hit out with facts and figures on social media. Online petitions erupted literally overnight in opposition to this capitulation. Emergency branch committees met early Tuesday morning, followed by members’ meetings. One after another, right across Scotland and the UK, union meetings voted to reject this capitulation… in virtually all cases, by unanimous votes!

Hundreds of strikers besieged the UCU HQ in London, growing in numbers as the morning passed, with one of them reminding UCU general secretary Sally Hunt that they shouldn’t suspend the strike in order to vote on this deal because they’d already voted to reject this assault on the decent pension guaranteed through the USS Defined Benefits scheme – as opposed to the slashed scheme utterly dependent on the vagaries of the Stock Market, which university bosses want to impose.

Pickets in Scotland gathered round mobile phone videos of this encounter, and approved and applauded the striker who told Sally Hunt that by recommending this new deal she was “objectively on the side of the employers”.

Before the Higher Education Committee (HEC) of the union met to decide on the new deal, a UK-wide meeting of branch delegates met, receiving messages from their local branches, from the growing picket lines.

UCU Strathclyde, for instance, unanimously fired off a message, rejecting the proposed agreement, to their reps – which included the declaration: “We reject the view that the USS [defined benefit pension] scheme is in crisis and consider that the alleged deficit position has been fabricated by UUK [university bosses] for its own purposes.”

Deal Rejected by All Branches!

Not a single branch approved the deal. In turn the HEC rejected it, agreeing to sustain the strike, with a further 14 days of action agreed.

This series of events is a massive victory for the ranks of the union – and for all trade unionists who wish to resist the employers’ assault on pensions, pay and job security… as well as defending education as a public service, as opposed to a neoliberal marketplace for profiteering.

UCU Strathclyde branch organised a trade union solidarity rally this morning, which was perfectly timed to counter any doubts strikers may have had after the stance of their UK negotiators. It was held before the national union meetings had reached decisions – and its spirit and messages were conveyed to the branch reps in London.

The crowd of about 200 was addressed by the local UCU branch president Brian Garvey; Jeanette Findlay of Glasgow UCU; John Jamieson of the PCS NEC; speakers from Unite and Unison; STUC deputy general secretary Dave Moxham; and myself as newly elected Usdaw NEC member… amongst others.

In pledging practical and political solidarity, I told the rally:

“Some might ask what a strike of university staff has to do with Usdaw. Well, many Usdaw members are students, working to survive for lack of the student grant they should get. But it goes much deeper than that.

“This strike is partly about pensions. Don’t forget pensions are not some benign gift from a gang of UUK bosses, they’re the deferred wages of workers. If you lost 23%, or 47%, or 52% of your wages you’d be rightly up in arms about it. So don’t accept such cuts to your deferred wages either.

“And when the bosses claim they can’t afford to sustain your pension levels, it’s worth remembering the same universities rake in £17billion a year from students alone. Reports show the pension scheme, USS, grew its assets by 20% last year.

“This is not some corner shop that can’t afford the upkeep of pensions. It’s part of the deeper nature of the society we live in. Where workers’ wages have suffered their worst fall and stagnation since the days of the Napoleonic Wars, 200 years ago. Where the plague of casualised labour hits not only retail but also universities, with zero hours, short hours, and fixed term contracts.

“It’s not my place to tell you what to do about this deal. But as a lifelong trade unionist and socialist, let me venture an opinion. In negotiations, never accept the first offer from the employers!

“Of course there are times when you might have to weigh up the forces on your side. If the numbers here today had dwindled compared to the last 3 weeks, or the strike was crumbling, you might have to beat a tactical retreat. But the opposite is true! The numbers have grown massively, with new faces on this rally, and 15-20% growth in union membership since the action began.

“The employers are in disarray, on the run, with vice-chancellors split all over the place. When they’re on the run, don’t relent, keep chasing them!

“And you’re not alone. Other workers back your action, your unity, your courage. The momentum of the strike is growing. And when a juggernaut rolls down a hill gathering momentum, you don’t throw the passengers under its wheels to stop it!”

This battle has today entered a new and very serious phase. The attempts by the employers to impose an end to the guaranteed pension scheme (defined benefits), slashing them by £10,000 a year average, provoked the 83% majority for strike action.

The botched attempts by the top UCU leadership to accept a shoddy new offer – that is still based on fundamentally the same level of cuts to pensions – has massively emboldened and strengthened the unity of the membership, led by branch officers and activists.

The growing support from students – despite crude attempts by the government and employers to divide them against the strikers – is reflected in occupations of buildings, including in Aberdeen, Cambridge, Edinburgh and Dundee.

Speaking from the Dundee occupation, SSP member Calum Murray said: “We’re occupying the vice-chancellor’s offices to put pressure on Pete Downes, and in solidarity with other universities also in occupation against the marketisation and commercialisation of our higher education system.”

As further strikes are prepared, just as the exam period looms, the battle hardens. But so has the resolve of those on strike, boosted by new recruits to the UCU and solidarity from other workers and unions. It would seem that the clear and powerful message from the UCU membership is #NoCapitulation.

They need and deserve the active solidarity of all fellow trade unionists, including collections for their strike hardship fund, critically important in particular for the low-paid precarious workers in their midst.

Help the UCU members win a victory for us all!