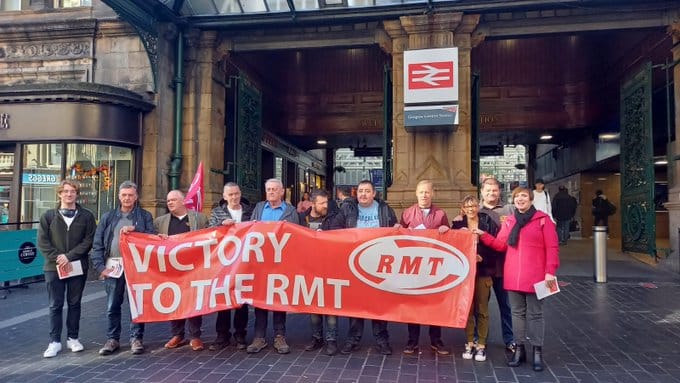 Despite the cost of living crisis, runaway bills, and soaring inflation, workers are left with a pittance of just £9.90-an-hour – while Avanti and private contractors pay out tens of millions to shareholders. Richie Venton spoke to RMT Regional Organiser Gordon Martin:

“Low-paid cleaners on Avanti West Coast trains were on strike today – fighting for survival as prices rocket, on a pittance pay rate of £9.90-an-hour.

These workers risked their lives to keep trains hygienic throughout the Covid pandemic, but they literally get NO company sick pay!

The privatised rail network is cursed by profiteering capitalist ownership, where workers come last, in a system of multi-tiered profiteering.

Avanti paid out £11.5m in dividends to shareholders last year.

Avanti contracts Alstom – who handed out £58million in dividends to shareholders last year.

Meantime, these train cleaners have to strike to win an increase on their paltry £9.90-an-hour! And for sick pay!

That’s the sickness of capitalism summed up.

I interviewed RMT Regional Organiser Gordon Martin at the picket line about the spreading strikes for survival by several groups of rail workers: