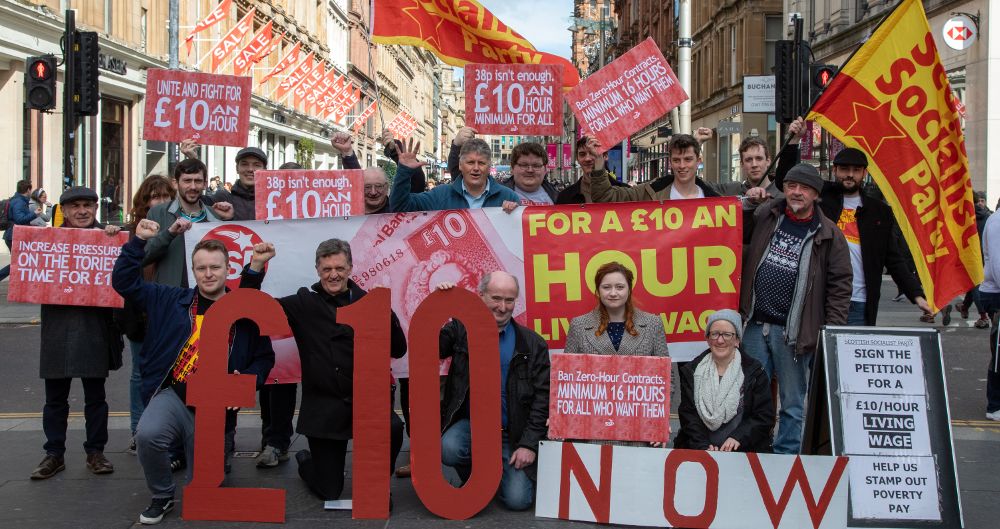 The National Minimum Wage goes up by 38p on Monday April 1st from £7.83/per hour to £8.21 thanks to the Scottish Socialist Party and campaigners like us.

The SSP marked this over the weekend by taking campaigns onto the streets with stalls in both Glasgow and Edinburgh.

“On the streets we have collected over 100,000 signatures pressing our demand for a £10 an hour minimum wage for all irrespective of age – and our work in the unions means that this demand is now the policy of the TUC.

It’s not enough of course – we want £10/hour because that’s the rate the Government say you need to be earning to pay your own way. But make no mistake, without campaigns like ours it would not be going up at all.

The National Minimum Wage was just £3.60/hour when introduced by Tony Blair in 1998. It has taken concerted pressure over the years from campaigns like the SSP’s to force it up to £8.21.

Without such campaigning the poverty wage epidemic in Britain would be even worse. Of the one million people in Scotland living in poverty today most are in work! It used to be the case work was the route out of poverty, not anymore.

Employers are exploiting people on zero hour contracts and slave wages. It’s so bad that many hundreds of thousands of people across Britain rely on food banks to feed themselves and their families and most of them are working! This cannot go on.

The Scottish Socialist Party campaigns for a £10/hour living wage, with a minimum 16 hours guaranteed each week and for this rate to be applied universally regardless of age.”