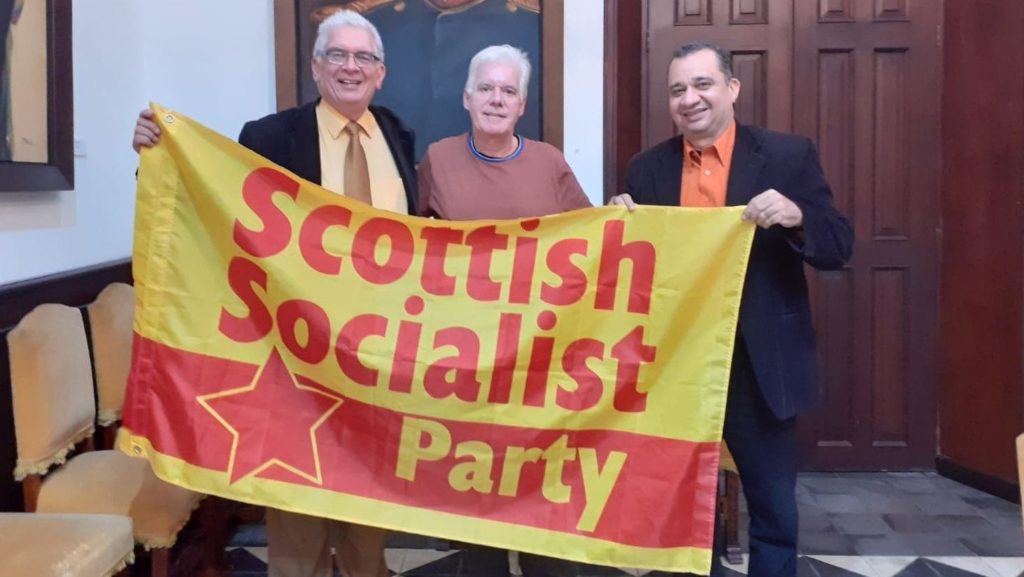 Recently returned from a fact-finding mission in Caracas, Venezuela, SSP International Secretary Bill Bonnar reports on what he saw, and how his experiences compare to the western media narrative:

A completely misplaced criticism of the Scottish Socialist Party, particularly from socialists in England, is that we are some kind of nationalist party because of our support for Scottish independence. Nothing could be further from the truth. We are a socialist party which is part of an independence movement. Our aim is the break up of the British imperialist state and the establishment of a Scottish Socialist Republic. More John McLean than Nicola Sturgeon. We are also a profoundly internationalist party with a proud track record of international solidarity and contacts with socialist movements throughout the world. This was demonstrated recently by the decision to send a Scottish Socialist Party member to Venezuela to express, in person, our support for the Venezuelan Revolution, establish contact with the PSUV and to report back on what they experienced. What follows is my report.

Before I left I noted the kind of stories which were circulating in the British media. Caracas was a battle ground between supporters and opponents of the government, there was fighting in the streets, the Maduro ‘dictatorship’ was clinging to power by its finger tips and army controlled death squads were rampaging through the capital hunting down opponents. It was therefore with some trepidation that I landed in the capital . Yet my first day revealed all this to be a compete work of fiction. What I witnessed was a city and its people going about its normal business. I saw no conflicts or clashes and the main activity of the army, the National Guard, seemed to be in trying to sort out the horrendous traffic congestion. When I related some of the horror stories circulating in the British media in a meeting in the Ministry of Foreign Affairs they simply laughed explaining that the opposition had an entire industry devoted to spreading anti-government propaganda which is then sent around the world via American news agencies. Instead they invited me to explore the capital and draw my own conclusions. These were my impressions.

It was obvious that describing Nicolas Maduro as a dictator is a nonsense. He is the elected President of an elected government. In fact it was pointed out that in the last 20 years there has been 25 elections at regional, national and presidential level and the PSUV have won 23 of them; most by huge margins and under international supervision. The so called democratic opposition have not recognised any of these results and recently announced that they would never recognise any future election victory by the PSUV. It says everything we need to know about the opposition. As for Maduro being a dictator my sense was that there exists in the government a strong collective leadership.

The right wing opposition appear to have little or no presence within the capital; they are overwhelmingly located in the wealthy white suburbs stretching along the Caribbean coast. It’s where the wealthy live and have always lived; not in Caracas itself. In fact someone told me that the clue to understanding the politics of Caracas is to understand its geography. Although in South America, Caracas is in every sense a Caribbean city. With a population of over four million people, mostly black or mixed race and surrounded by barrios with another half million people, it is the power base of the government. The wealthy white suburbs are a considerable distance away which is the key problem for the opposition. They cannot influence events in the capital because they are not in the capital. A picture of the nature of the opposition quickly emerges. The core are overwhelming white and middle class and although they call for the ‘restoration of democracy’; there is hardly a democrat among them, They have never recognised any democratic victory, have regularly called for the armed overthrow of the elected government, have glorified in some of the past right wing dictatorships which ruled Venezuela and are completely in the pay of an aggressive, foreign enemy power. The aim is clear. To turn the clock back to that point immediately before the Bolivarian Revolution when they treated the country as their own personal property and when the government was composed of people exactly like them.

The army, in the form of the National Guard, has a strong presence and is strongly linked to the government. All the military commanders appear to be leading political figures in their own right and project a very definite image as defenders of Venezuelan sovereignty and the Bolivarian Revolution. It is interesting to watch a pro-government mass rally on television; addressed by a leading army general who uses words like socialism, imperialism and solidarity.

One obvious example of government support was the National Petition against American Aggression; NO MAS TRUMP. Launched on the first day I arrived I proudly signed it on behalf of the Scottish Socialist Party. In the main squares and streets large numbers of stalls had been set up for people to sign, queues quickly gathering and within a week it had totalled 7 million signatures and counting.

Any visitor to Caracas will be immediately struck by the extent of the current economic crisis. It is obvious from the crumbling infrastructure, the half empty shops and the queues outside banks. While the origins of this crisis are in the collapse of world oil prices and before that the international banking crisis; what is driving it now are draconian American sanctions and domestic economic sabotage and speculation from the country’s still predominant private sector. This latter point produces palpable anger among people who are regularly held to ransom by private companies and distributors. There is a war being waged against the Venezuelan people. It is not a war fought by guns and marauding American troops, it’s an economic war and remains the principle weapon of the opposition and their American backers. The aim is to make the Venezuelan people so desperate that they will support any kind of change just to get back to some normality. As was explained to me: ‘It’s as if the opposition and the USA are holding a gun to the heads of the people while offering them a simple choice. If you continue to support the government we will keep this going but if you support us we will make all of this magically go away.’

Students of Latin American history will instantly recognise a strategy of destabilisation. It was applied to Chile in the seventies and Nicaragua in the eighties and is being applied to Venezuela today. Yet the impression I had was that the government was riding out the economic storm. It was beginning to bring the currency under control, deal with hyper inflation and through increasing links with China was significantly undermining the sanctions.

Despite everything that has been thrown at them my impression was of a government which remain strong, resolute and confident about the future. With the opposition apparently in complete disarray and the American Government scratching its head with what to do next, the Venezuelan Government remain firmly in control and is setting the agenda.

What struck me more than anything else was the way the Venezuelan Government frame their struggle in terms of national self determination and sovereignty. Venezuela first emerged through a campaign against Spanish colonialism and for independence and in modern times against US aggression. From one small country fighting to achieve its own sovereignty to one fighting to defend its existing sovereignty, it is a struggle we in Scotland should be proud to identify with.

Bill Bonnar is the International Secretary of the SSP.

Bill will be speaking about his experiences in Caracas at the University of Stirling on Wednesday the 18th of September, further details are in the link below:

2 thoughts on “An Eyewitness From Venezuela”