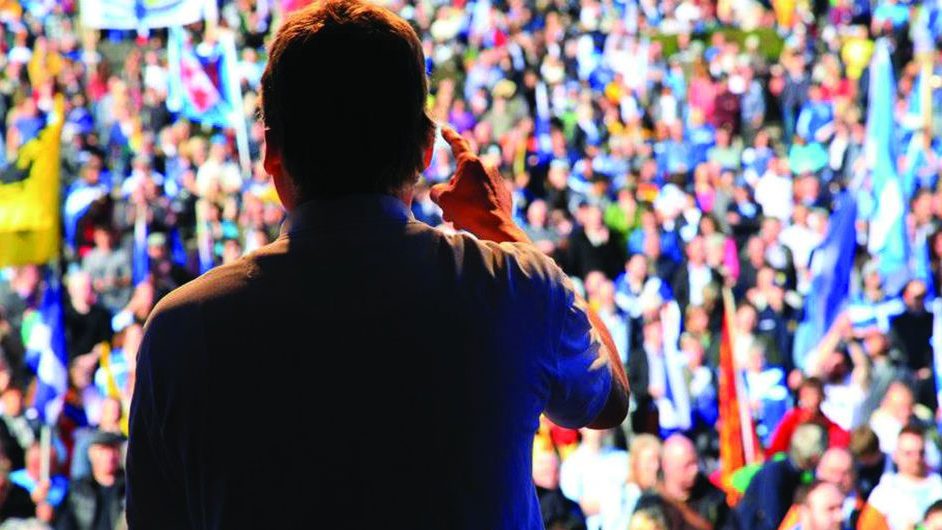 Colin Fox, SSP National Co-Spokesperson, reflects on the 2014 Scottish Independence Referendum and what the independence campaign has accomplished in the five years following it:

I bumped into Alastair Darling [‘Better Together’] recently while parking the SSP van near Waverley station. ‘It’s called Vantonio Gramsci’ I informed the bemused former Marxist who now sits in the House of Lords. He got the joke. We briefly considered how each of us had ‘enjoyed’ the 2014 referendum campaign. I had, he hadn’t. Ironic really because it was he after all who was on the winning side. He confided that although he hadn’t enjoyed the campaign he always felt they were going to win.

My memories of the 2014 referendum campaign are positive even though we lost. ‘YES Scotland’ did as well as we could in the circumstances. Securing 45% was not to be sniffed at. We lost because the country was not ready for Independence. We lost because deep down the majority felt the case was too weak and the risks too high. We lost because Devo Max was more popular.

There are those who will tell you it’s only a matter of time until Scotland becomes independent. I wouldn’t be so sure. Those who conclude that the Brexit crisis has meant Independence is now inevitable are also wrong. The UK ruling class are as determined to halt it as we are to secure it. More so perhaps.

Brexit has seen astonishing political circumstances recently but Britain will still leave the EU and survive without problem in its present capitalist state. Indeed I have often been embarrassed by the forecasts of economic and political catastrophe offered up by ‘Remainers’ like Jo Swinson, Ian Murray, Tom Watson and Nicola Sturgeon. Their claims have been exposed again and again and only make Boris Johnson look less ludicrous than he should.

I sat on the Yes Scotland Advisory Board throughout the referendum campaign on behalf of the Scottish Socialist Party alongside Nicola Sturgeon and several others. I never underestimated my unionist enemies once. And I can also tell you I never at any time felt we’d win. None of the serious polls ever suggested it. Nor have they since. And although I insisted in the days immediately after September 14th ‘Independence was delayed not defeated’, that was bravado.

I think the independence movement is in a mess. Its leaders have made many mistakes since 2014. It has significant weaknesses it has not addressed and makes light of the huge challenges ahead. Take the decision to tie the case for self-determination to EU membership? That, I fear, is going to haunt us for a long time. Building illusions in the anti-democratic, neo-liberal Brussels bureaucracy is bad enough, but arguing for independence from the UK whilst planning to give it all back to an even more centralised, less democratic European super state is self-defeating.

Britain will be out of the EU within weeks. And after June 2016 it was always bound to be thus. Those who put the Independence cart before the Westminster horse, insisted Scotland would not leave. They were bound to be wrong. The harsh fact of the matter is that it was constitutionally irrelevant how Scotland voted in 2016 given the unitary UK ballot. To argue otherwise was empty rhetoric. Whether Scotland wants to join the EU as an independent country remains to be seen. Either way that question can only be decided after a referendum in our newly independent nation. We are clearly not there yet.

In 2014 we had all the glitz and glamour, all the confidence and optimism, but we lost the vote. If we are honest we lost the argument too particularly on the economy. We have still not persuaded a majority of our fellow citizens of our case. Last time round there was at least a sense that YES represented profound economic and political change, albeit one not spelt out in detail anywhere. Subsequently the SNP have thrown in the towel on profound change and substantial improvement in the economic conditions facing the working class majority. The case made by Andrew Wilson’s Sustainable Growth Commission is now as bad as any Boris Johnson advocates. Swapping the Saltire for the Union Jack seems all there is on offer.

What then are the prospects for INDYREF2? Frankly, there’s no chance of another legally binding vote being granted. And remember, under the terms of the 1997 Scotland Act, the power to hold one, being a constitutional matter, remains reserved to Westminster. The Tories, Labour and Lib-Dems are ‘died in the wool’ unionists. Having seen the 2014 vote go so close they are not likely to give it another go.

The only way Nicola Sturgeon can force a second referendum through Westminster is by securing a democratic majority in Scotland for YES. Not only has that majority never been there, our economic case remains our Achilles Heel. Furthermore the movement has still not reconciled what independence is actually for. Is it to maintain things largely as they are and change little in the way UK PLC runs Scotland? Or is it to ditch the British state and the neo-liberal exploitation at its heart. This conflict must be resolved.

Independence will never be won if it offers only minuscule change. And yet that is what is at the heart of Scotland’s Sustainable Growth Commission case. Until we improve our economic prospectus we will never secure majority support. And until we resolve the democratic revolution at the heart of this question we will not secure a majority for independence and make Westminster grant a second vote. So we have many big questions to address in the next five years.

Colin Fox is the joint national spokesperson of the Scottish Socialist Party. He was SSP MSP for the Lothians 2003-2007 and sat on the YES Scotland Advisory Board 2012-14 on behalf of the party.