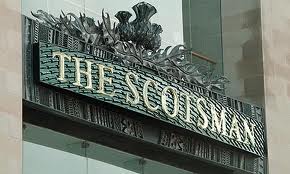 SSP National spokesman Colin Fox had his letter criticising the Tories, Liberals and Labour for pandering to racists on immigration published in The Scotsman today.

Congratulations to David Maddox on his timely piece in today’s Scotsman exposing the hypocritical and objectionable position of the three Westminster parties on immigration. [‘Repercussions in Westminster over immigration and UKIP may yet be felt north of the Border’ 26/3/13].

For he points out, in the week the UK Government introduces the ‘bedroom tax’, that their posturing is another example of politics that are alien to us here in Scotland.

Earlier in the paper David Cameron is quoted threatening to refuse immigrants access to housing, NHS treatment and welfare saying the Government is ‘rolling up that red carpet and showing them [i.e.immigrants] the door.’  What utter nonsense is this? Based on his electoral fear of the ‘nutters and closet racists’ he calls UKIP, Cameron ignores the clearest economic facts. Immigrants are net contributors to the economy of the UK. They create far more wealth and pay far more into the Treasury than they receive in benefits. Moreover, far from ‘rolling out the red carpet’ as he ludicrously suggests Britain actually reserves the poorest available housing, the poorest jobs and the lowest wages for those newly arriving here to enrich this country.

It’s time all three Westminster parties stopped pandering to ‘nutters and closet racists’ and started explaining how people who come to this country enrich our economy and society rather than use immigrants as ‘scapegoats’ for the worst recession in living memory, which is offensive nonsense, pure and simple.