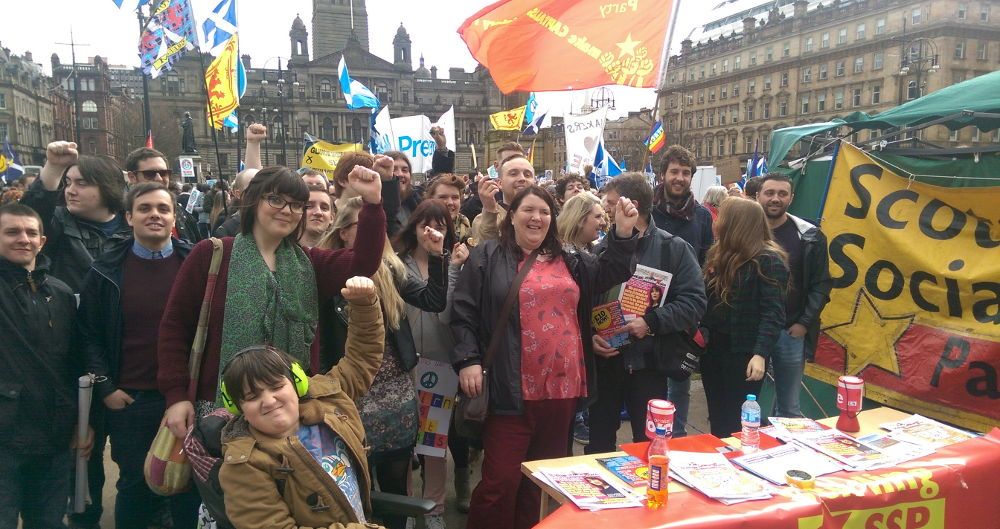 In the end the polls got it wrong, badly wrong. And all the commentators who placed so much faith in them looked foolish. There was no hung Parliament. No horse-trading between Westminster parties, no weeks of instability before a coalition Government was formed. The Tories thumped Labour and won a clear majority.

The polls did at least get it right in Scotland. They predicted a political revolution and we got one. Mind you anyone canvassing on the doorsteps, town centres or workplaces of Scotland these past 6 weeks could sense something extraordinary was happening. Labour lost all but one of its 41 Scottish seats as voters opted decisively for ‘regime change’. The one party state that Scotland endured for 50 years collapsed. Like the 1989 fall of Ceausescu in Romania a socially conservative and politically corrupt regime was swept away by an unprecedented and widespread demand for change. The party of Red Clydeside has become the party of Morningside as the sole Scottish Labour MP is found in South Edinburgh.

The UK result leaves a bitter/sweet taste in the mouth however because despite routing Labour in Scotland voters watched in disbelief as the Tories were returned to Government in London. This contrasting emotion is expressed in the poem ‘The Little White Rose’ by Hugh MacDiarmid

‘The rose of all the world is not for me
I want for my part
Only the little white rose of Scotland
That smells sharp and sweet – and breaks the heart.’

David Cameron and his strategists relentlessly played what Andrew Rawnsley of ‘The Observer’ called ‘the England card’ [10/5/15] to exploit fears that a Labour Government would be a ‘puppet’ of the SNP ‘bogeyman’ from beyond Hadrian’s Wall. This was a dangerous tactic for Unionists like Cameron to employ and has far reaching repercussions for the National question in Scotland. For it means his victory alienated the people of Scotland and throws into sharp relief just how much the political ‘centre of gravity’ in Southern England is at odds with everywhere else in these isles. Ironically it poses the national question sharply when Scotland is now to all extent and purposes a SNP ‘one party state’.

Meanwhile Labour’s catastrophic defeat signals a deep existential crisis for them not least in Scotland. Also writing in ‘The Observer’ [10/5/15] Will Hutton concluded that ‘Labour again proved incapable of offering a compelling vision around which a progressive but pro-capitalist electorate in England could coalesce. Only in Scotland has a party managed to represent what the majority of Britons want – social fairness within an innovative, progressive capitalism – and been rewarded with a landslide’. ‘This election’ he concluded ‘will solve nothing. Inequality will grow in Britain. Low wages and insecure jobs will proliferate. The housing crisis will deepen. Public services will become even more threadbare.’

With that conclusion in mind the SNP’s claim to be ‘Standing up for Scotland’ demands close scrutiny. For it begs many pertinent questions such as ‘which Scotland do you mean? Is it the Scotland of the urban poor in the housing schemes or the landowners in their estates? Is it the Scotland on poverty wages and zero hour contracts or the tax dodging multinational corporations paying scandalous wages and employing those contracts?

The answer will become clear over the next few weeks as 56 SNP MP’s take their seats at Westminster because the SNP’s manifesto is a fusion of orthodox neo-liberal economic policies and classic social democracy. Nicola Sturgeon insists her party is ‘anti-austerity’. Yet as the Institute of Fiscal Studies pointed out during the election the SNP’s economic programme was rather more austere than they liked to admit. The IFS highlighted the fact that their commitment to a 0.5% rise in public spending [which Nicola Sturgeon herself admits is ‘very modest’ some might say timid] ties them to those cuts in welfare and public spending already made. Moreover the same ‘anti-austerity’ SNP has voted through many cuts at Holyrood since 2007. And they recommended £30m of cuts this year in running Edinburgh City Council.

They also claim to ‘oppose privatisation’ and ‘protect the NHS from Tory attacks’ yet sold off Edinburgh’s Sick Children’s Hospital to a private company under its controversial neo-PFI scheme the ‘Scottish Futures Trust’. Their promise to return ScotRail to public ownership when the contract came up for tender was also broken.

And the SNP refuses to rescind the worst anti-union laws in Europe because the ‘business community’ demands these laws are maintained.

So despite the May 7th revolution we are set to endure further austerity, privatisation, poverty wages, zero hour contracts, a chronic shortage of affordable housing, appalling inequality, food banks, child poverty, people freezing to death in winter and the privatisation of public services.

The Scottish Socialist Party congratulates the SNP on their stunning victory on May 7th. Nigh-on eradicating Labour in Scotland in this way was no mean feat. The result of decades of work by the nationalists it has nonetheless shaken the political foundations of Scotland to its core. It is a remarkable and welcome achievement in any socialist’s book.

But we remain unconvinced by the SNP’s programme or it’s leadership’s commitment to liberate working class people from the yoke of neo-liberal free market capitalism. That’s why our manifesto was entitled ‘Standing up for Scotland’s working class majority.’

The SSP’s role today as ‘Scotland’s Socialist Party’ therefore remains [just as it was in 1997 when Tony Blair and New Labour won a similarly decisive victory] to hold social democracy’s ‘feet to the fire’ so to speak. We are not social democrats, we are socialists and there is a profound difference. We will work as a party and with others to ensure the SNP keep the promises they made to their working class constituency. The SNP carry the expectations of millions on their shoulders. In the course of this election they repeatedly promised to defend Scotland from Tory attacks. Time will tell whether they keep such promises and serve the interests of Scotland’s working class majority or the interests of the corporations and international capital.

One thought on “THE BITTER SWEET RESULT THE POLLS MISSED COMPLETELY”