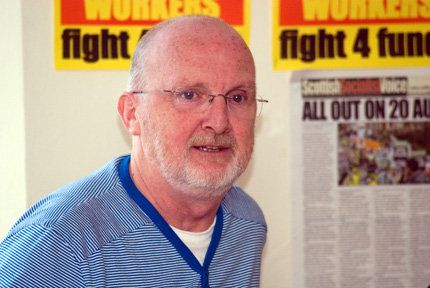 SSP Councillor Jim Bollan addresses hundreds of bedroom tax protesters outside the West Dumbartonshire Council meeting which was to vote on whether or not to pursue evictions of tenants in arrears with their rent.

The Bedroom tax comes into effect on April 1st but that does not mean that will be the end of the matter, not by a long way. Councils across Scotland for example will have to decide whether they pursue those tenants who fall into rent arrears as a consequence of having their housing benefit cut by up to £35 per week. The SNP Housing Minister Margaret Burgess is on record saying she does not think there will be any evictions anywhere in Scotland as a result of the bedroom tax measures, well that remains to be seen. Meanwhile the Scottish Socialist Party like other campaigners is determined to halt the eviction of any tenant who finds themselves under threat. We are determined to hold the SNP and Labour Party to account in opposing this disgraceful Con-Dem attack on the most vulnerable.