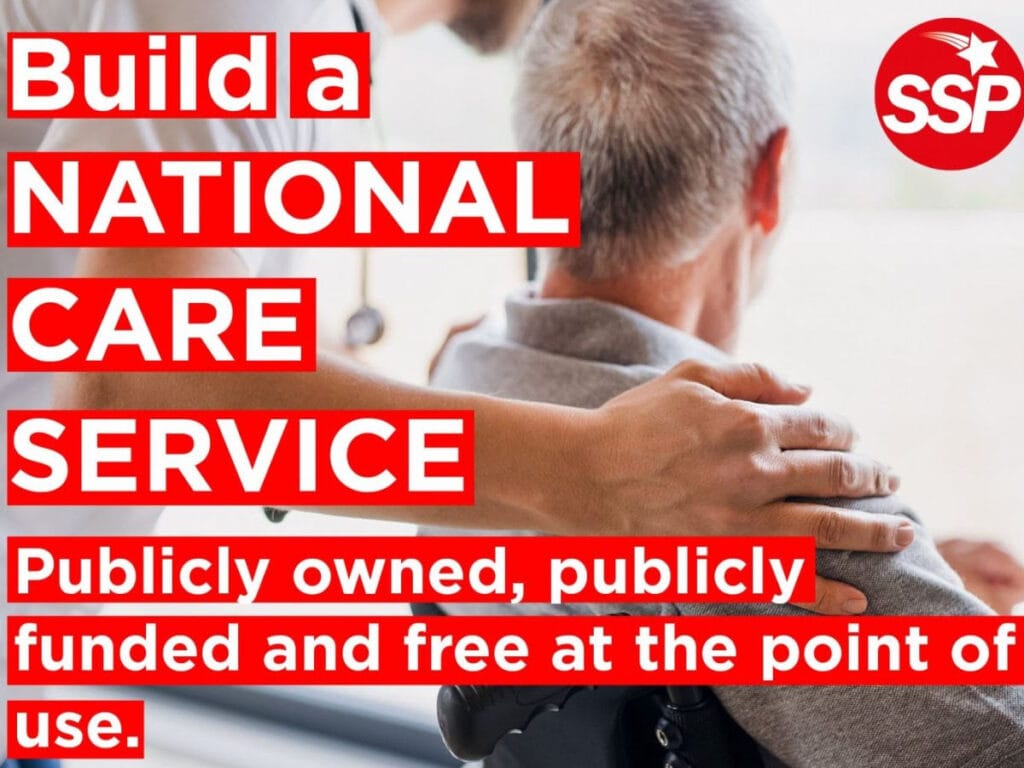 The Scottish Socialist Party has called an online public discussion about the need for a National Care Service in Scotland, following the release of opinion polling which showed overwhelming public support for one.

SSP National Co-spokesperson, Colin Fox, will be joined by Trish McLaughlin, a care worker of 20 years’ experience, to discuss the next steps in delivering essential reform in care.

The SSP has hosted previous public discussions on the topic, with participants including Jane Lethbridge, Centre for Research in Employment and Work; Prof. Allyson Pollock, SAGE advisory committee; and Derek Feeley, former Chief Executive of NHS Scotland and Chair of the Independent Review into Adult Social Care.

Polling, conducted by Panelbase on behalf of the SSP, revealed that public opinion on a publicly-owned National Care Service, publicly-funded and free at the point of need, is 69% in favour.

That figure rises to 72% among women, and found majority support from SNP, Labour, Liberal Democrat, and Conservative Party voters.

70% said they were NOT surprised to hear the dire situation in Scotland’s care homes described as “the greatest failure of devolved government”. Major outbreaks of COVID-19 in mostly-private sector care homes account for thousands of COVID deaths in Scotland.

On 22 January, it was revealed that a special Crown Office taskforce is investigating cases at 474 care homes in Scotland.

The COVID-19 crisis has shone a light on the urgent need for a National Care Service, and for an overhaul in the way elderly care is funded, operated, and distributed in Scotland.

In 2017, the SSP National Conference called for “a fully funded public service that guarantees dignity in retirement for everyone… that is provided by fully trained, fairly rewarded and highly valued staff.”

The SSP has since led the campaign in Scotland for a publicly-owned, publicly-funded National Care Service which is free at the point of need, like the NHS.

“The people of Scotland are unhappy with the current adult social care model. They want elderly care provided for everyone, paid for out of our taxes, publicly owned like the NHS, and, above all, fit for the 21st century.

“Scotland’s political leaders need to take heed. They have failed to tackle this problem for too long and as this poll shows people are losing patience with them. Half the COVID19 deaths in Scotland occurred in residential care homes and 70% of that care is provided by 1,100 different private companies that can charge up to £1,600 a week or £90,000 a year.

“In a series of unannounced visits recently The Scottish Care Inspectorate found 40% of facilities were either ‘unsatisfactory’ or ‘poor’. We cannot go on like this. Demand for elderly care is set to increase by 40% over the next decade as ‘the baby boom generation’ of the 1950’s retires. This issue is a ticking time bomb as far as our nation’s elderly care is concerned.

“To add insult to injury the pay and conditions of care workers is a national scandal. More than one-third hand in their notice every year citing low wages and low morale as the chief reason. Tinkering reforms for a service plainly in crisis will simply not do.

“The Scottish Socialist Party were out campaigning on the streets of Scotland last year demanding a National Care Service that is free at the point of need and therefore universally, equally and democratically, available to everyone. For that to happen it must be paid for by everyone out of our taxes.

“That way we ensure it is a truly national service. We see that service being publicly owned and run with nobody making whopping profits out of it and running off to the Cayman Islands tax haven with them like the biggest private provider presently does. Only then can we ensure that the quality of care provided is as people demand and those who deliver it are also properly rewarded.”