The chill wind added to the Baltic state of Saltcoats today. Our bones ached, my jaw nearly froze while explaining the SSP case for keeping the Ardrossan ferry to Arran, but not just leaving it at that.

We aren’t satisfied with the status quo, where private profiteering Peel Ports fail to invest, leaving the ferry overly prone to cancellations. We want the Scottish government to take all ports – Ardrossan AND Troon included – into public ownership, along with the railways, to invest in modernized, integrated, decent public transport.

At our street stall we condemned the government for instead opening up a process that has unleashed a bidding war between rival profiteers, the owners of the Ardrossan and Troon ports.

Despite the frost in the air, a phenomenal warmth was shown to us by local people. Queues regularly formed to sign the Petition. People were eager to express their views – all generations; workers and former workers on the port and ferries; several who took a supply of SSP leaflets to advertise our public meeting. All were furious about the threat of turning the area into a complete ghost town; most saw the idea of switching to Troon simply absurd; many volunteered their anger at the Scottish government.

We had to print new petition sheets to keep up. We sold all 103 available copies of the Voice, with Arran resident Colin Turbett’s article on the issue. And the local Ayrshire SSP members shrugged off the weather conditions with a renewed vigour and enthusiasm to build the SSP as the party that takes up concrete day-to-day issues with a clear socialist alternative. 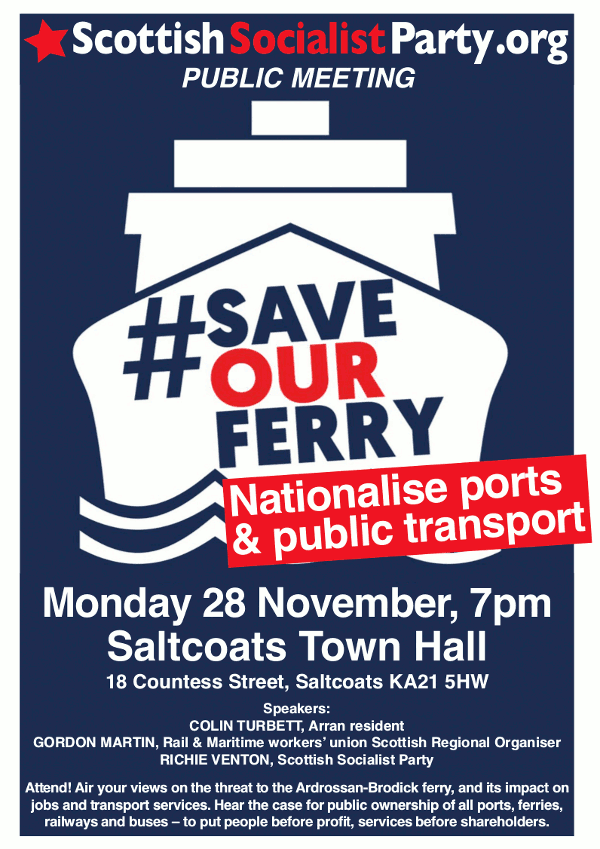