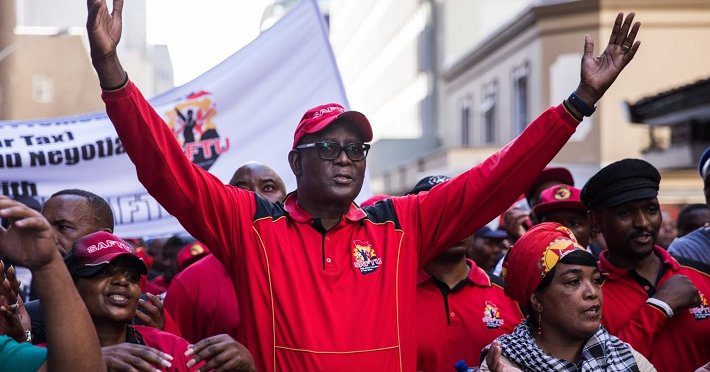 Scottish Socialist Voice organisers are delighted and honoured to announce that prominent workers’ leader from South Africa, Zwilinzima Vavi, will attend as international speaker at the Voice Forum on Saturday 9 October.

Zwelinzima Vavi is general secretary of the 800,000-strong South African Federation of Trade Unions (SAFTU) – the second-largest union formation in the country.

This mighty force of workers has been involved in many powerful struggles, including general strikes, with employers and the ANC government, for a living wage, energy justice, against privatisation, and in defence of workers’ rights and conditions.

Zweli is the leader of a mass union organisation that campaigns for public ownership and democratic control by workers and communities of renewable energy, and describes itself as “a revolutionary and socialist oriented federation”, with the fighting motto “Organise or Starve”.

We will be joined by Sam Mason, national political officer of the public and civil service union, PCS, who is prominent internationally and nationally in Trade Unions for Energy Democracy and the trade union wing of the COP26 Coalition.

Sam has spearheaded the campaigning work and publications of PCS on environmental justice and a Just Transition for workers for many years.

Stephen Smellie is deputy convenor of UNISON Scotland, and an elected member of that massive public-sector union’s National Executive.

Stephen is a prominent member of the COP26 Coalition trade union movement, a leading figure for years in UNISON’s campaigns for environmental measures in local authority, NHS, and other workplaces organised by UNISON.