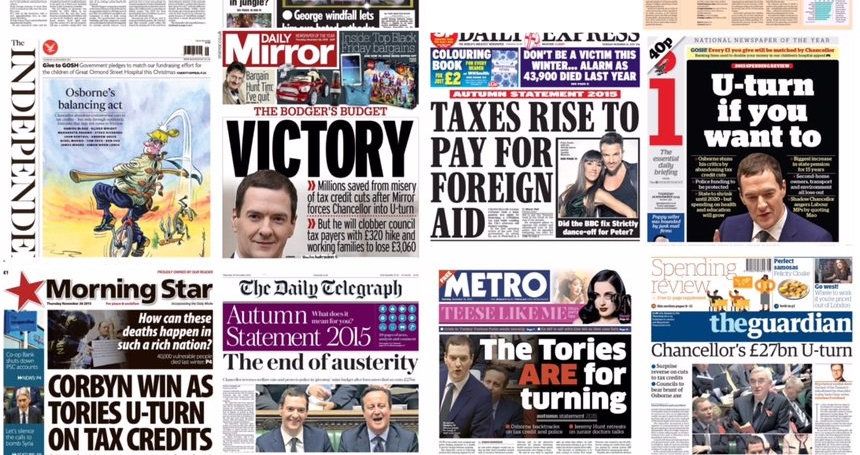 by Colin Fox and Sandra Webster

The ‘headline grabber’ will inevitably be the Chancellor’s unexpected climb down over cuts to tax credits. Just as important however is the reduction in the state’s responsibilities – and spending which now accounts for just 35% of total UK income. It was 50% when he became Chancellor in 2010.

Faced with widespread opposition to his plan to cut £4.4bn from the tax credits paid to low paid workers [the average person would have lost around £1,500 per annum], this aspirant Prime Minister abandoned his plan altogether. His decision says more about his own political ambitions than any change of political direction by the Tories. Anti-austerity campaigners buoyed up by the news will want to ‘put their champagne on ice’ as it were for the Tories still intend to cut £12bn from other welfare provisions most noticeably Universal Credit and housing benefit. Osborne will also make £20bn of cuts to transport services, climate change provisions and to the justice budget.

[Osborne’s] decision says more about his own political ambitions than any change of political direction by the Tories.

Over the last 5 years the Tories have systematically slashed the proportion of the UK economy attributable to state spending. They are committed, as Osborne himself again made clear today, ‘to a high wage, low tax and low public spending economy’. This means more and more of the responsibility for providing social services is passed to the private sector. And ironically it means the Tories pressing Britain’s employers to pay the national living wage.

How can Osborne make such a dramatic u-turn on tax credits and still maintain a commitment to lowering the national debt? The Office for Budget Responsibility [OBR] provided an answer to both assist and rebut Osborne’s objective. It firstly forecasts higher tax returns will arrive in Osborne’s coffers in the year ahead and thus helps his case but they have also concluded the UK’s overall borrowing will go up not down from now until 2020. Osborne’s decisions today were therefore more about his own political ambitions than any economic ‘prudence’.

There were yet more notable stealth announcements, hidden under the spin.

Colin Fox and Sandra Webster are the joint national spokespeople of the SSP.