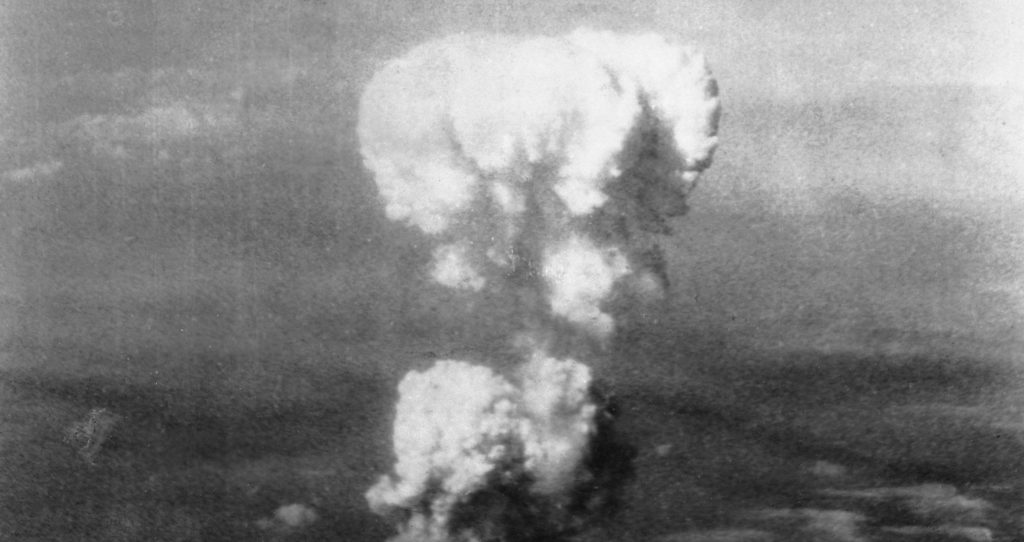 Yesterday, we commemorated the use of the first nuclear weapon in the world. 70 years later we still live under the shadow of the prospect of a war which would mean the end of all mankind. I am a cold war kid, I can remember lying in my bed hearing the drone of an aeroplane above me and praying it wasn’t going to drop the bomb. I hoped my bairns wouldn’t have to live with this worry; a generation on, the threat is still there.

70 years ago a nuclear weapon, equivalent to 15,000 tons of TNT, exploded 20,000 feet above Hiroshima. Eisenhower claimed it was the only way Japan would surrender, but what was wanted was an excuse to drop the first bomb. Those who didn’t die straight away were not the lucky ones. The present generation still live with the physical damage of radiation poisoning. A sentence beyond life. We who still live under the shadow of the bomb have a duty to remember and remind folk that the very fact these weapons exist is inexcusable.

We have heard all the arguments about why we don’t need nuclear weapons. Of course there are the economic ones but I agree with what the prime minister of Japan. Nuclear weapons should just not be part of any civilised society. Full stop. Their continued existence is a shame on us all. In modern warfare, two people can cause Armageddon by entering codes from behind a desk and launching these evil weapons. There would be “retaliation”, escalation and the end of the world as we know it.

As I have for many years I attended our local commemoration at Barshaw Park in Paisley. I always feel part of a bigger movement and am mindful of similar remembrances happening all over the world there are others who believe in an end to this inhuman wickedness too. My first political activity was marching up the Law in Dundee with CND aged 11. Making a stand against nuclear weapons will be something I will always do; it is the right thing to do.

I remember today to the Peace Campers at Faslane Peace Camp who stay as a permanent reminder that these weapons are so evil. I know they need support; Folk to stay overnight, practical help and regular supplies. If you visit you will get a warm welcome.

Like all actions that can change the world they begin individually. That is why I believe in unilateral disarmament. These weapons have no place in Scotland, especially an independent Scotland which will come soon. Those in power have a responsibility to question why they are there and arrange their removal as soon as possible. We all have a responsibility to speak to our friends, families and neighbours to tell them the reality of the use of nuclear weapons. So, I march with my family and share the message with them, carrying the torch of truth on to the next generation. Wherever you are, marching or not please spare a minute to think of all who have suffered, with the hope it will never happen again. We all need hope that little flame of inspiration that can change the word.