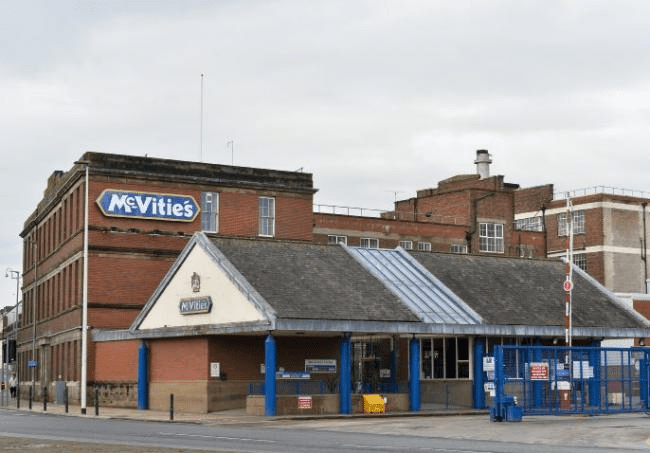 STOP THE CLOSURE OF MCVITIE’S TOLLCROSS FACTORY!
SAVE 500 JOBS – FEED THE PEOPLE, NOT CAPITALIST PROFITS!

Shock and devastation have swept through Glasgow’s East End with the announcement of closure of the giant McVitie’s Tollcross biscuit factory next year, in May 2022.

Nearly 500 workers and their families are most immediately thrown into turmoil by this callous declaration by the highly profitable owners, Pladis. But countless local small businesses also face wipe-out, in a part of the city already ravaged by high unemployment and rampant poverty.

This butchery is made all the more galling by the fact Pladis announced their closure plans to the media before bothering to tell the workforce.

The McVitie’s Tollcross factory has been there since 1925. The brand itself has an even longer history, going back 200 years, growing out of an Edinburgh shop to become a market leader in today’s food sector.

Several generations of local workers have fed the profits of McVitie’s owners, often through the labour of multiple members of the same families.

Over the last few years, the workforce has pulled out all the stops to turn round the performance levels of the Tollcross factory, despite the habitual failure of the owners to invest and modernise.

Workers’ efforts mean the Tollcross site now tops the table of most KPIs – Key Performance Indicators – for the entire company.

McVitie’s owners, Pladis, is the biggest biscuit manufacturer in the UK, having carved out a quarter share of the entire market.

In August 2020 their operating profits leapt up by £102million to £186million, after generating revenues of £2.1billion. Hardly your average local corner shop!

Just two months ago, in March, Pladis reported their strongest industrial growth of any period in the last five years, with an increase of 7%, having thrived throughout the pandemic.

That growth of sales and profits was fed by the efforts of 500 workers, who maintained full production throughout the past 15 months of the pandemic, with none of them being put on furlough.

On top of that, public funds from Scottish taxpayers were handed over to Pladis – to assist a new business plan and modernisation, to attract new products and create new jobs – reportedly to the tune of £1million.

Where have all the public funds gone? Why have Pladis not invested any meaningful amounts to modernise the Tollcross factory since getting this public subsidy?

Where have all the profits gone?

What possible excuse have Pladis bosses got for shutting down such an iconic and profitable factory?

Capitalist profiteers have once more stabbed a loyal workforce in the back, right in the middle of a pandemic, during which the owners’ neglect of health and safety led to a cluster of Covid-19 infections amongst the workforce last year.

And with bitter irony they announced this devastating plan during World Mental Health Week – apparently oblivious or indifferent to the horrendous impact of this news on the mental health of 500 workers who are to be thrown on the scrapheap just when profiteering employers across the board are slashing jobs – with 73,000 having disappeared in Scotland last year alone, and one in seven young workers left to waste, jobless.

DEMAND ACTION BY THE SCOTTISH GOVERNMENT

The GMB trade union are rightly demanding action from the Scottish Government to save the factory.

They should demand that the secret accounts of Pladis be thrown open to the inspection of trade union representatives and sympathetic experts, to expose the shenanigans of a company which seems intent on relocating production away from the best-performing factory in their entire network of production. Already, they shunted production lines away from Tollcross to other UK factories, and the ‘Nibbles’ production line to Eastern Europe.

The entire trade union movement should mobilise alongside local communities to demand intervention by the Scottish Government and Glasgow City Council to save the factory. Not by further subsidising Pladis profiteers, but by taking it over and working with the unions and their members to devise plans for what they can produce while saving every job.

Whether that be the continued production of biscuits or some other foodstuffs, there is certainly plenty of scope and need within the population for the continued use of these workers’ skills and investment to modernise the factory itself. That’s especially so in a nation where the government squanders £200billion to renew Trident nuclear weapons – presumably to keep Scotland’s growing network of food banks safe!

Every trade unionist and their union should join the Rally, with banners aloft, which McVitie’s workers and the GMB union have organised this Saturday 22nd May at 10am, to oppose the closure.

This is an opportunity to challenge the newly elected Scottish Government to come clean on whose side they are on. The side of profiteering capitalists who cut and run leaving a desert in their wake? Or the side of workers who produced the company’s wealth and made the likes of Digestives and Hobnobs world famous?

Much was said by the First Minister during the election campaign about focusing on Covid recovery.

To make that meaningful requires an industrial strategy which puts the livelihoods of workers and communities ahead of the spivs, speculators and profiteers of big business.

It requires a readiness to take meaningful action rather than just hand-wringing speeches of sympathy, and yet another Task Force as window-dressing for government capitulation to closure.

In other words, takeover of the factory by the government to deploy workers’ skills and equipment for socially useful production of whatever foodstuffs appear most socially necessary and practical, in collaboration with the workers, their unions, and local communities.

We live in a nation scarred by hunger, food poverty and mounting reliance on food banks which will only worsen if these jobs are allowed to disappear with closure of the last remaining manufacturing site in the district.

It is surely not beyond the wit of humanity – including the Scottish Government and Glasgow City Council – to devise a plan which matches the desperate need for affordable food (including healthy free school meals for all kids) whilst deploying the skills and protecting the livelihoods of the massive McVitie’s workforce?

Feed the people, not capitalists’ profits!

Demand that unless Pladis immediately reverses its plans, the Scottish Government take over the factory and help to feed the nation!