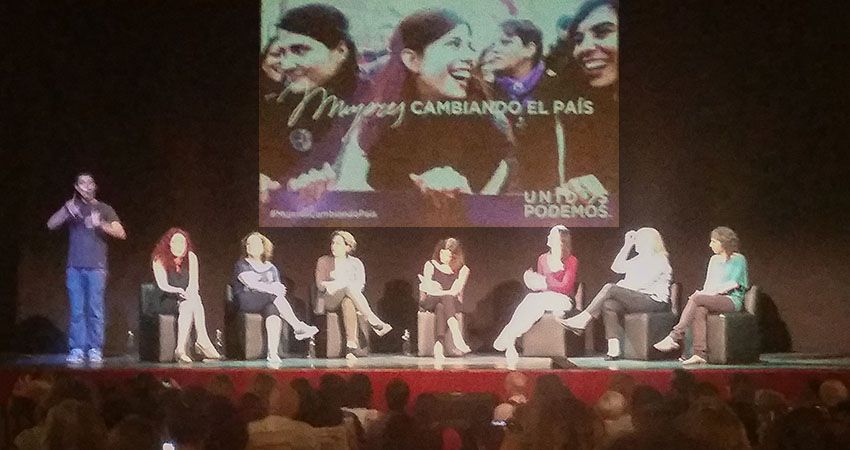 Britain’s Referendum on the EU is receiving as much coverage here in Spain as the country’s General Election this Sunday. The UK poll features heavily on TV, radio and all the newspapers. Most commentators are waiting to see what impact the UK result will have, if any, on Spanish public opinion.

If, as seems likely, Britain votes to ‘Remain’ on Friday the eyes of Europe will quickly move to Madrid. For EU leaders may see a left-wing government emerge to confront their neo-liberal hegemony.

The mood here is as inconclusive as those in Britain. Whilst Spanish electoral law prohibits the publication of polls in the final five days of the campaign a clear consensus has been emerging with the conservative Partido Popular [PP] of acting Prime Minster Mariano Rajoy in the lead with 30% support. The left-wing ‘Unidos Podemos’ [United We Can] of Pablo Iglesias has moved up to second place since the last vote in December after they joined an electoral alliance with Izquerida Unida [United Left/Spanish Communist Party], Eqos [the Greens] and various independence supporting groups in Catalonia, the Basque country, the Valencian community and Galicia. The Spanish Labour Party PSOE [unhelpfully translating as the Spanish Socialist Workers Party – they are neither socialists nor ‘a workers’ party] are down in third place on 20% and ‘Cuidadanos’ [Citizens] the centre-right party still lie in fourth place on around 15% support.

All of which means no party is again likely to emerge with a majority in the 350 seat Cortes. This replicates the outcome from the last election in December. Indeed this election takes place because that impasse has lasted 6 months now and the Constitution dictates another test of public opinion must therefore occur.

There is a powerful mood across Spain to break the impasse. The most likely outcomes therefore are either a ‘Grand Coalition’ between the PP and PSOE the historic political foes of the past 40 years or a UP/PSOE partnership. The former is highly problematic and would be like the Tories and Labour joining forces in the UK. It would be the death of PSOE in working class areas of Spain. Equally, however, the second ‘block-breaker’ as it were would involve Unidos Podemos and PSOE forming the first left-wing coalition Government in Spain since the 1930’s. But the rivalry between the two parties is bitter and has been fierce since Podemos emerged in January 2014. The pre-election rhetoric directed at Podemos and Iglesias in particular by PSOE leader Pedro Sanchez and his colleague in their Andaluscian redoubt Suszana Diaz in ruling out such a partnership has been uncompromising.

Yet in finishing third PSOE will face huge pressure to make the same type of ‘lesser of two evils’ choice the Scottish Socialist Party confronted in the EU Referendum. They are doomed to junior partner if they support Unidos Podemos and doomed in the eyes of millions of young Spaniards pleading for help if they don’t. Spanish workers will not easily forgive Pedro Sanchez if he returns the conservatives to power to inflict further economic and social misery to millions of Spaniards young and old coping with such hardship. The differences between UP and PSOE are profound not least on neo-liberalism and economic austerity on the one hand and on the national question – independence for Catalonia, the Basque country etc – on the other. But UP insiders believe these are not as unbridgeable as many think. We shall see what happens in the next fascinating few days.

I will be sending back further exclusive reports to this website in the course of the next week.

Colin Fox is the joint national spokesperson of the Scottish Socialist Party.

Main Photo: Colin Fox – An image from last night’s Unidos Podemos women’s rally in a theatre in La Latina, Madrid. It features among the speakers the Podemos Mayor of Barcelona, Ada Colau. There were almost a thousand people in the audience and all eight speakers were women candidates or prominent supporters of Unidos Podemos.
22 June 2016