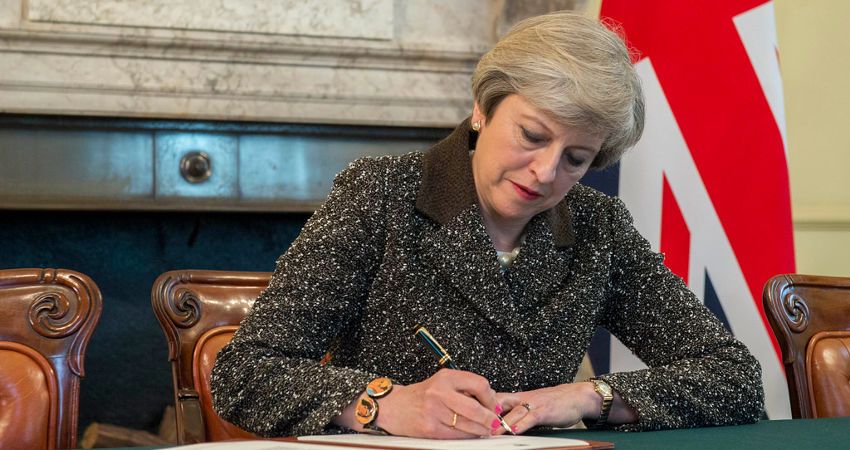 So now Brexit is set for October 31st. Prime Minister Theresa May’s Brexit impasse just runs on, and on, and on.

With the second ‘deadline’, April 12th, for leaving the EU having expired anti-climatically without fanfare, just as March 29th did before it, Britain now faces the farcical prospect of contesting elections to a European Parliament voters opted to Leave three years ago.

Having seen her EU Withdrawal Bill ignominiously dumped three times by the House of Commons, the UK Prime Minister in desperation opted for a tactical volte-face turning abruptly away from trying to persuade her recalcitrant DUP/ERG right wing allies, towards wooing Labour instead.

But the obstacles to an EU deal via this ‘compromise’ are proving no more surmountable. Labour demands Britain remains inside a Customs Union with the EU as the price of such support. But this outcome, as Theresa May well knows, would split her party from top to bottom.

She can only deliver Brexit it would appear at the cost of rupturing the Tory party altogether.

Jeremy Corbyn meanwhile is in the horns of his own dilemma. He knows the majority of his party demand a second referendum as the price of his support for May’s Bill.

It is by no means certain Theresa May will reach an agreement with Labour. And with European elections now looming Labour sees no advantage in helping May deliver on her Brexit promise. If those elections go ahead in the utterly polarised Remain; Leave atmosphere of the moment both main parties could suffer a hammering. Here in Scotland, which voted Remain by a much wider margin, it is likely that the SNP will see a boost in its support from voters opposed to Brexit.

On the other side of the conflict Nigel Farage’s Brexit Party has seen a 10% increase in its poll standings in a week as Leave voters angrily abandon Labour and the Tories. Meanwhile Chuka Umunna’s ‘Change UK’ is taking similar sized chunks out of Labours figures.

This particular polarisation, described by some as a ‘carnival of reaction’, looks set to continue until October.