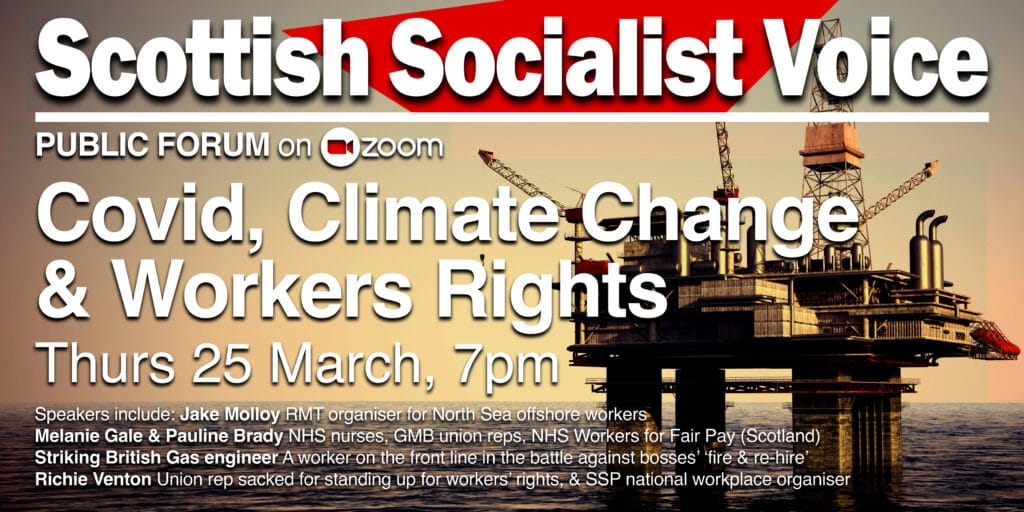 One year on from the start of the COVID lockdown, with 700,00 jobs lost and 0ver 120,000 dead, the often-repeated pledges of a “new normal” are fading like snowflakes in summer.

As repeatedly predicted by the Scottish Socialist Voice, the bosses who gorged on millions of pounds of taxpayer handouts and made billions of profits from PPE, track and trace and a multitude of crony contracts are now, Oliver Twist style, asking for more.

Indeed as COVID is hopefully beginning to be contained, a new industrial virus is gathering pace, as greedy bosses impose a regime of Fire and Rehire, pay pegs and sackings as part of their ceaseless drive for greater and greater profits.

This is of course entirely predictable as they hold the threat of mass unemployment over the heads of those already in work.

The Voice Forum on 25th March will both bring reports from some of those on the front line of the struggle for justice in a number of fields, and help build solidarity with them.

As governments move from claps to pay slaps for heroic NHS workers, one is reminded of the betrayal of an earlier generation of WW1 soldiers who were lauded as heroes and promised a new land only to face mass unemployment, means tests and hunger.

We are fortunate therefore to be joined at the Forum by two NHS Workers for Fair Pay (Scotland) activists, Melanie Gale and Pauline Brady, to report on the boiling anger among their colleagues and their determination to win pay justice.

Engineers at British Gas are facing a bitter struggle against the drive by their employer to sack them and then re-hire them on lower pay and much poorer conditions. They have already spent over 30 days on strike, and such is the level of pressure from bosses that our speaker has asked not to be named.

During the “all in it together” phase of the COVID crisis, there was much talk of a green recovery and how it can create a jobs Eldorado, despite the fact that much of the construction and design work on this has by-passed Scotland and generated jobs scandals such as BiFab.

Jake Molloy, who organises North Sea offshore workers for the RMT union, has decades of experience of this industry and he and his members can be at the cutting edge of the move towards a low carbon economy.

He will outline to the event how his members’ skills can be utilised in this process in a way that helps combat climate change and ensures that the skills and experience of offshore workers can be part of the solution to the climate emergency.

The Forum will be chaired and addressed by SSP national workplace organiser and trade union veteran Richie Venton. He was himself the first union convener in Scotland to be victimised and sacked for standing up for workers’ health and rights during the pandemic.

ALL are welcome to attend this Online Voice Forum, on the theme of Covid, Climate Change & Workers’ Rights.

Get your FREE Eventbrite tickets to attend the Zoom event here