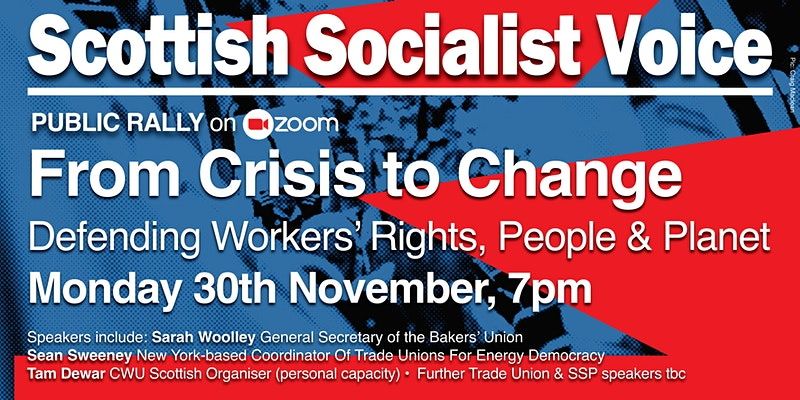 The Scottish Socialist Voice, the only socialist newspaper written and edited in Scotland, is holding a Voice Forum on “From Crisis to Change” – exploring how to defend, and grow, workers’ rights in challenging times while building a future that puts people and planet before profit.

The Voice Forum will take place, online, on Monday 30 November from 7pm, GMT.

Speakers will confront the issues of sackings, pay cuts, and health and safety generated by the COVID-19 crisis – with the contributions from workers in key sectors including rail, BT, food, and retail. They will chart ways to take us beyond the essential struggles of today, towards an alternative which seeks not a “New Normal” but a “Different Normal”. One that, through a Socialist Green New Deal, creates sustainable, well-paid jobs, and puts the needs of people and planet before profit.

TUED – represented by Sean Sweeney all the way from New York – and its participating unions are actively working at local, regional, national, and international levels to protect the interests of workers and their communities; to advance a vision for energy and climate protection rooted in the public good, and to build political support across the 200-million strong global labour movement for a just transition to democratically accountable renewable energy systems.

Such a transition needs to address the immediate concerns of workers in a way that can advance the extension of social ownership and democratic control of energy as part of a broad, inclusive, and vibrant social movement. TUED has 80 trade union bodies currently participating in their work including 11 national centres, 3 regional organisations, and 4 Global Union Federations as well as 11 allied policy, academic, and advocacy organisations.

BFAWU’s Sarah Woolley is at the heart of struggles against job losses in the food industry, for justice for fast-food workers, and workplace safety during the pandemic. Her union’s experiences in Greencore and other companies highlights the appalling lack of support for sick workers in the UK, which risks lives.

Sarah is leading her union’s campaign for full sick pay for all workers and the self-employed, and has been very vocal in her solidarity with sacked Usdaw convener, Richie Venton.

Tam Dewar is the Communication Workers Union divisional rep for Scotland and Northern Ireland. A former postie in Ayrshire, Tam is an experienced campaigner for democratic public ownership of postal and telecoms services.

He has been to the forefront of the struggles by posties in recent years. Tam will speak on the current battle in BT – the privatised profiteering giant which is slashing jobs and conditions, with CWU members balloting for strike action – as well as the New Deal for workers being pursued by the CWU.

Mandy Marshall works on the Scotland-London Caledonian Sleeper service and, as an RMT union rep, has been actively involved in the union’s campaign for proper rest facilities for staff – who typically work 15-hour shifts.

Serco, the profiteering masters of failure (Test and Trace included) have refused to supply adequate rest facilities, leading to fatigue, stress, and unsafe conditions. Mandy will speak on her workforce struggles for safe working conditions amidst the pandemic, and the future role of public transport as a system for people, not profit.

Richie Venton is the SSP workplace organiser and a member of the Usdaw NEC. Richie, an elected shop steward, was recently sacked by IKEA for standing up for full average wages for sick workers – resisting attempts to cut sick workers’ pay during the pandemic. Fresh from an exemplary solidarity campaign, that forced IKEA to concede a settlement to him, Richie will speak at the Voice Rally.

“Richie brings years of experience of building solidarity with workers in struggle and linking those struggles with the wider need for change which puts the needs of people and planet above profits for the elite.

“Not only will he bring the experiences of his battle with IKEA to our event but put them in the context of the wider struggle for change.”

The Scottish Socialist Voice has hosted forums on topics ranging from housing, Brexit, Scottish independence, the economy, and a great deal more – bringing together participants from across workplaces, Trade Unions, political parties, grassroots campaigns, and from around the world.

Its pages have been proud to carry reports and analysis of struggles in these and many other areas. The Scottish Socialist Voice does not have billionaire backers or big corporate sponsors – it is funded entirely by the generosity and support of the working-class communities it represents.