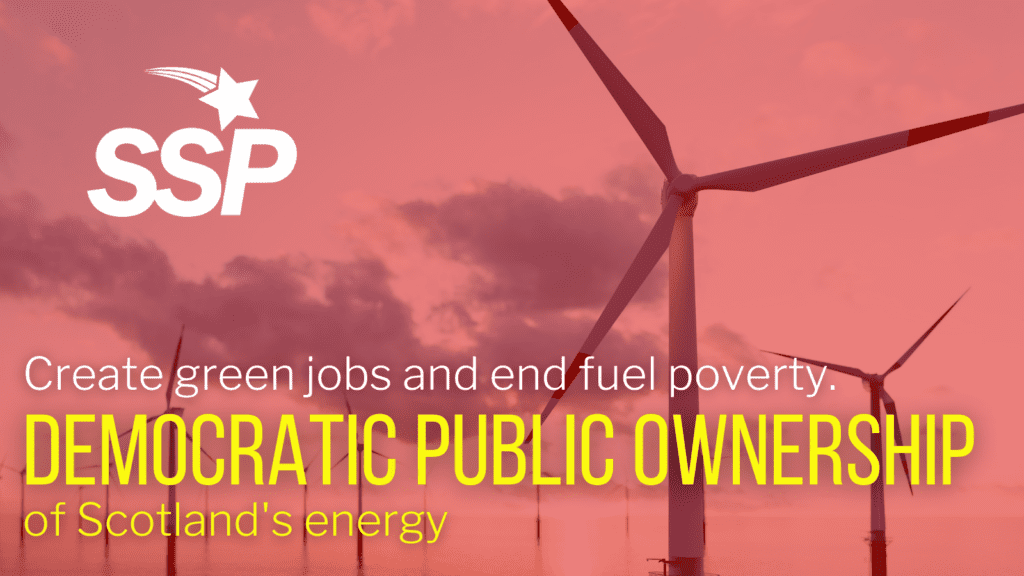 Millions of households in the UK are facing an average energy bill hike of between £693 and £708 from April 2022. The Scottish Socialist Party is demanding democratic public ownership of energy to end fuel poverty.

One in three households in Scotland already experiences fuel poverty amidst the worst cost-of-living crisis in a generation. Working-class households have been hit hard by falling incomes and rising living costs.

The energy bill hike has been announced on the same day that multinational polluter Shell declared that their 2021 profits rose to $19.3 billion – handing £6 billion to shareholders.

An energy bill hike will have a catastrophic effect on the quality of life for millions of working-class people. Fuel poverty leaves us unable to properly heat our homes, cook our food, and take part in social and economic life.

Energy is a vital public resource, and no society can flourish without control of its energy. It must be used for the collective good, not for private profit. This can power jobs, prosperity, and a rapid transformation of Scotland’s economy. Scotland’s renewable energy potential can power homes, public buildings, critical infrastructure, and workplaces – cutting individual costs, creating jobs, and supercharging economic recovery.

The SSP calls for immediate public investment in retrofitting every home and public building in Scotland to reduce energy usage, without cost to residents; for 100,000 new council homes built to the highest environmental and energy-efficiency standard, and for an expansion in municipal and local renewable energy production.

The STUC has found that over 100,000 jobs can be created in a 20-year plan to decarbonise and retrofit every home in Scotland.

Shell is among just 100 global companies responsible for 71% of worldwide greenhouse gas emissions. Mere months after COP26 was held in Glasgow, polluters continue to profit at the expense of people and our planet. Private profiteering is incompatible with fighting fuel poverty and the climate crisis.

Energy is a human necessity, and no society can thrive without it. But private energy tycoons currently control where our energy comes from and how much it costs us. While private energy profits, working-class people have gotten poorer, and our planet has gotten warmer.

In 2017, Nicola Sturgeon promised Scotland that a National Energy Company would be established by 2021, with “no shareholders to worry about, no corporate bonuses to consider”. Sturgeon promised those on lower incomes “the option of a supplier whose only job is to secure the lowest price for consumers”.

Instead, the SNP/Green coalition government has celebrated handing over North Sea renewable potential to multinational polluters just months after COP26 was held in Glasgow – a “Green” party that supports the polluters, and a “National” party that has abandoned democratic and independent control of Scotland’s energy.

Public money heavily subsidises oil barons and fossil fuel billionaires – but that doesn’t turn into secure jobs for offshore workers. The North Sea oil and gas sector has seen almost 200,000 job losses since 2014, and conditions are getting worse. 82% of sector workers want jobs outside of oil and gas – half of them in renewables.

The SSP is campaigning for a worker-led just transition to clean, green, renewable energy through democratic public ownership – to create at least three skilled, well-paid, fully unionised jobs for every one at risk in oil and gas.

“Socialist Change, not Climate Change: Poverty, Pollution, and Working Class Solutions” exposes the cover-ups, empty rhetoric and bogus ‘solutions’ on offer from big business and governments that uphold their exploitative rule – in Scotland, the UK and beyond.