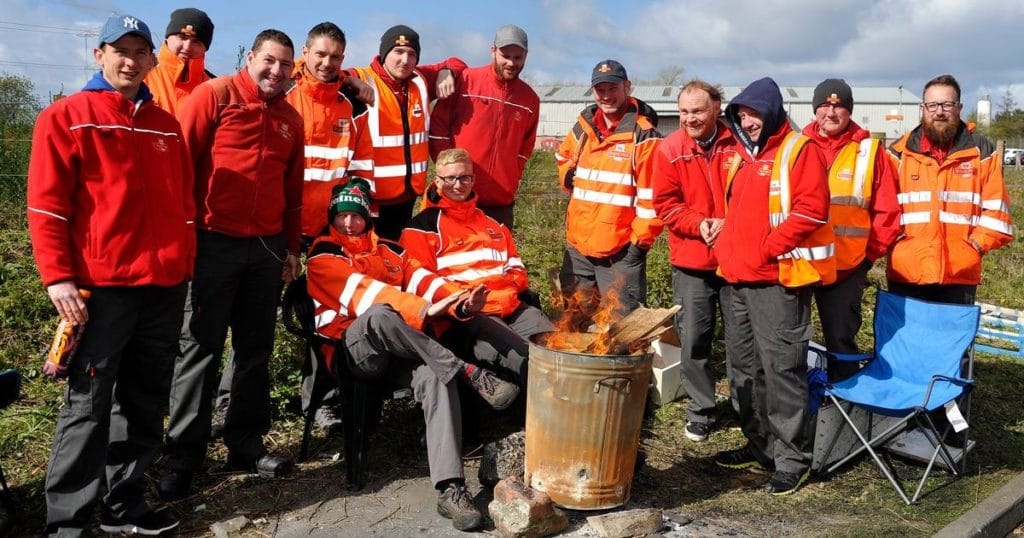 Wednesday 29th of April is National Postal Workers Day. This union event is designed to show solidarity with workers who have carried out life-threatening work throughout the COVID-19 crisis.

It’s designed to allow the public to say ‘Thank You’ to the posties for their valiant efforts, but now it must also become a declaration of solidarity against a brutal, full-frontal declaration of war by Royal Mail bosses.

Literally on the eve of national #PostalWorkersDay, Rico Back and the rest of the millionaire dictators in charge of Royal Mail have unilaterally declared that from the 11th of May, letter delivery will only be Monday to Friday, with parcels and packages delivered on Saturdays.

This is a blatant breach of the longstanding Universal Service Obligation (USO) whereby every household is guaranteed deliveries six days a week.

That’s precisely one of the core issues at the heart of the showdown between postal workers and their privatised bosses, which led to two overwhelming strike ballots, before and since Christmas.

With the outbreak of the killer virus, CWU trade union leaders suspended plans for strike action, in the hope the bosses would stop their assault whilst posties helped to provide a key service to the beleaguered public.

But instead, the employers have declared war on the union, its members and on the public service they provide. In the midst of the pandemic. That’s stooping down low, even by their standards.

They entirely bypassed the union in reaching this decision.

Their plan was never mentioned in discussions with the union just days ago. Their announcement is undoubtedly timed as a ruthless act of provocation, cold and calculated, putting the CWU in the position of having to either surrender, or stand up and fight back – and then face a tornado of media vilification.

Royal Mail have cynically used the coronavirus crisis as a smokescreen for ramming through an assault which the union had resisted on behalf of members and the public for the past two years.

The same bosses have shown absolutely no concern for the health of the workforce. At first they refused to put anybody on furlough. They resisted the demands of the union for full pay for any worker with childcare problems, or where their sick pay had been exhausted, or were self-isolating with symptoms, or looking after other shielded household members.

They arrogantly told workers who faced literally no income to go to a charity.

It was only after massive union pressure and publicity that they made a concession. But it still does not include furlough for posties with childcare issues, nor for the over-65s, nor for anybody who wants to self-isolate because others in their household have the symptoms.

On top of which they’ve refused to back-date any pay, and expect workers who are put on furlough to use at least two weeks of the their annual holidays.

Now they’re trying to con the public by dressing up abolition of 6-day delivery as a measure to “ease the pressure on posties”.

That is a barefaced lie.

Imposing it within 10 days, as they propose, will cause mayhem for shift patterns for drivers, delivery staff and those in sorting offices alike, also threatening pay-cuts in many cases.

It’s a cynical attempt to abolish a longstanding service, get rid of at least 20,000 jobs, and smash the power of the union in the process.

Workers and trade unionists need to stand up with the CWU – stand by your posties.

I spoke to TAM DEWAR, CWU Divisional Officer for Scotland and Northern Ireland:

“In all this time Royal Mail management have shown no concern nor readiness to act in defense of workers’ safety.

Whereas posties see COVID-19 as a life-threatening virus Rico Back and his cabal see it as a commercial opportunity and a chance to rush through changes to working practices they have been unable to do so far because of union resistance.

Postal workers are not only been fighting COVID-19 but fighting the employer as well.

The only way we got any safety measures was through collective action.

We wanted to protect posties’ safety and lives by each of them working a 3-day week during this crisis, but keeping the 6-day delivery. Of course Royal Mail bosses ruled that out on grounds of cost.

It’s only by taking action as a trade union we won any protection.

The Chief Executive needs to be sacked and replaced by somebody who’s willing to work with the union to defend the future of Royal Mail.

Otherwise it would be sold off to Amazon or Poundland, because the past two years have been an absolute disaster commercially since Rico Back took over.

We could well now be forced into taking strike action nationally by the actions Royal Mail.

They have declared all previous agreements are scrapped from now on.

They have announced there will be no deliveries on Saturdays and claim to have the support of Ofcom and the government.

It’s true that letters have collapsed in number during this crisis, but there are absolute stacks of packets piled up at Mail Centres.

It’s ten times worse than the Christmas rush, for example with at least ten huge trucks queued up at the Glasgow Mail Centre, full of parcels.

The bosses want to control their budget, refusing overtime, but still demanding the work is done, even though 20% of the workforce are off sick.

They seem hell bent on switching to parcel deliveries which could affect about 27,000 jobs.

If you can’t drive you can’t deliver. And when we got removal of two workers to a delivery van, because of social distancing, Royal Mail did not hire a single van to compensate – even though there must be thousands of hire vans available during the lockdown.

We had strikes in four places in Scotland using health and safety legislation, because people were being forced to work in unsafe conditions to deliver pizza leaflets and leaflets for companies that are shut!

All that after it had been declared an essential service. Our idea of an essential service would be delivery of prescriptions, food and looking out for the vulnerable, not junk mail. If we have to take strike action now, nationally, we will welcome support on the picket lines.”