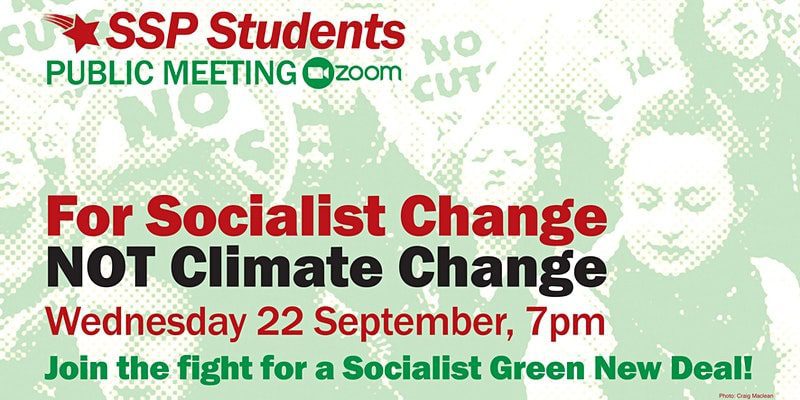 We need a vision for Scotland that puts democratic public ownership of major industry, infrastructure, energy, land, agriculture, aquaculture, and finance at the heart of an economy fit for the 21st century.

Our planet is threatened by the profit-driven system of capitalism – with fires, floods, drought, and devastation for millions of the poorest people.

As COP26 gathers in Glasgow we need to examine alternatives that tackle this crisis, but in a fashion that improves the lives and livelihoods of the mass of the population, NOT through cuts to jobs, education, or living standards.

It is NOT ‘humanity’ who created this catastrophe, but a tiny minority of the grotesquely rich. The 100 biggest multinational corporations have spewed out 71% of all greenhouse gas emissions since the 1970s.

We cannot rely on the capitalist polluters to solve this crisis. Nor on these same exploiters to end the poverty and inequality created by capitalism.

The struggle to reduce greenhouse gasses goes hand-in-hand with the struggle to redistribute wealth and tackle rising injustice – we can only solve capitalism’s climate crisis with a world for the working class, not the ruling class.

Capitalism created the climate crisis and obscene poverty and inequality – we need Socialism to save lives, livelihoods, and the planet we live on.