The Scottish Socialist Party is pleased to bring you our best-selling pamphlet “The Case For an Independent Socialist Scotland” as a free download.

We welcome all to download, share and discuss our arguments against continuing Westminster rule under a neo-liberal warmongering British state elite and our unique vision for an independent socialist Scotland.

To download and read PDF files, you will need appropriate software, such as Adobe Reader for Windows. Mac OS X, computer tablets and most flavours of Linux come with PDF viewers already.

Paper copies of the pamphlet are still available via our shop. (£5, including p+p) 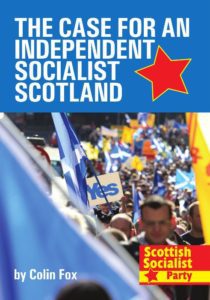 “On Thursday 18 September 2014, Scotland will go to the polls to decide whether to remain part of the 300 year old political union that is ‘The United Kingdom of Great Britain and Northern Ireland’ or become the world’s newest independent country.

The decision will have far reaching consequences either way. For the British state, Scottish independence represents a huge threat, a profound loss of economic and political power and influence at home and abroad. Consequently, it is dead-set against it and it will do its utmost to stop that from happening.

For the independence movement, the stakes are equally high. The referendum offers a once in a lifetime opportunity to secure self-determination for Scotland, to establish a left of centre social democratic state and free five million Scots from the yoke of British imperialism…”