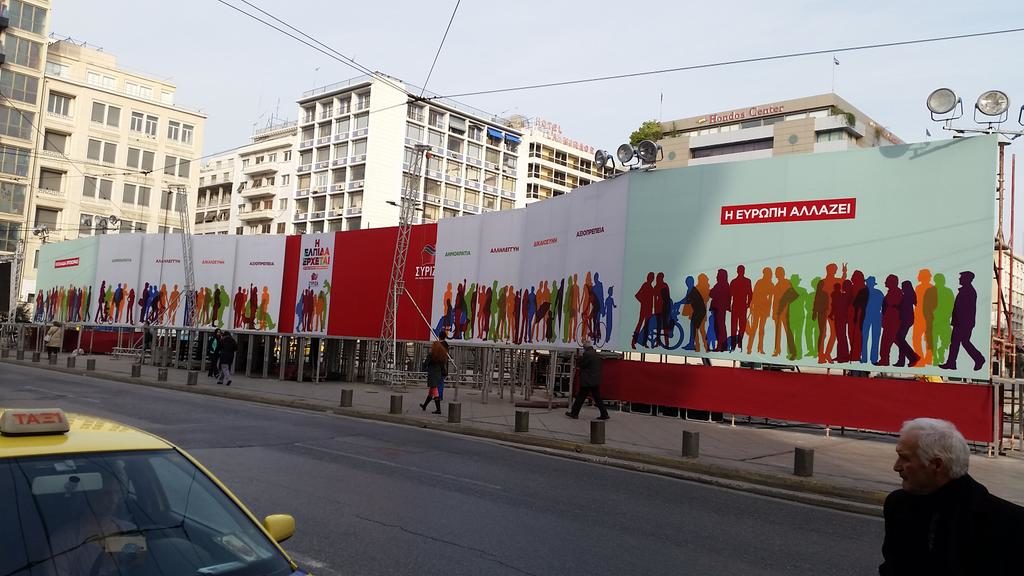 With just three days to go until the Greek General Election Athens is buzzing. The stage is literally set for Syriza’s final election rally tonight in Omonia Square in the centre of the city.

And the party pronounced ‘CeeReeZa’ standing for the ‘Coalition of the Radical Left’, is quietly confident. The polls have shown Syriza’s lead lengthening. They have a 5.5% lead over the conservatives New Democracy. This means they will be the biggest party and qualify for a further 50 seats on top of their proportional share of the vote automatically. It remains to be seen whether they can secure an overall majority as this depends on how many other parties also cross the 3% threshold needed to qualify for seats. Syriza insiders suggest it will be touch and go but believe their party will form the next Government on its own.

Europe therefore looks set to have its first radical left-wing government since World War 2. And frankly it is not difficult to see why. Evidence of economic and social decline are everywhere. That Greeks have suffered severe privations in recent years is not in doubt. The workforce is down by 25% since 2010. Wages and pensions are down 40% but taxes are up. The national minimum wage is now down to just 400 Euro’s a month and that’s not enough to live on. Derelict shops, beggars and rough sleepers are visible in every Athens street. Greece has debts of 319bn Euro’s the equivalent to 177% of the nations annual wealth. It is the second highest in the world. And the price of servicing those debts is crippling the Greek economy.

Syriza’s slogan ‘Hope is coming. Greece is advancing. Europe is changing’ has captured the imagination of millions. Leader Alexis Tsipras has promised he will not pay back the debts owed to the Troika [The IMF/EU and ECB]. He has made it clear Greece cannot pay and will not pay. Instead a Syriza Government will double the state pension and the national minimum wage effectively returning them to 2008 levels. These proposals, together with the pledge to ensure every citizen has electricity to keep warm, are the centrepiece of Syriza’s manifesto or ‘Thesaloniki Declaration’. Activists refer to it as their modest but immediate 7 step relief programme.

In the circumstances Syriza leaders are well aware that winning Sunday’s election may be the easy part as the tasks facing their young party are immense. Governing will be very tough indeed. Change needs to come quickly for the people and yet the resources may be hard to find. They also know that the price of failure will be severe. In 2009 PASOK [the Labour Party’s equivalent in Greece] secured 44% of the vote promising to get Greece out of its debts and economic collapse. They failed. Today PASOK is running around 4% in the polls. New Democracy has suffered a similar reversal.

But the challenges of Government come next week. For the moment the party is focused on winning support from all across Greece. And their election campaign is inspiring millions. It is colourful, determined and optimistic.