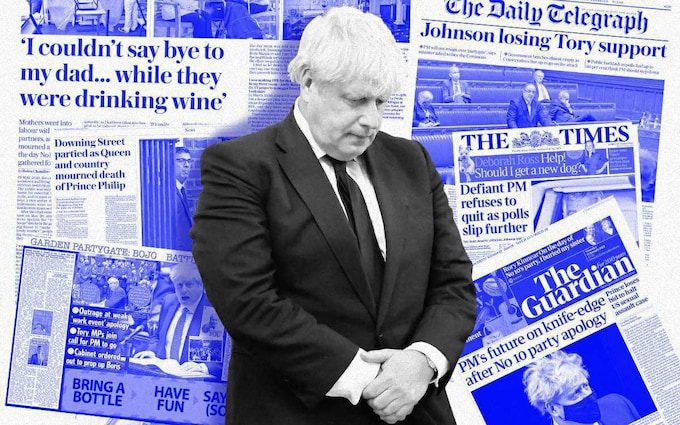 Boris Johnson must go, and the Tories must go – but it doesn’t stop there. To unseat the Tories and win immediate improvements for the lives of working-class people, we need united action around key demands.

The Tories are ripping each other’s throats out in a desperate struggle to survive the public rage at Boris Johnson’s booze-up with Tory flunkies – held at a time when the rest of us were banned from meeting more than one person outdoors, and relatives couldn’t even visit their loved ones, as they died a cruel, lonely Covid death.

All Tories Must Go!

But nobody should be fooled into thinking that whenever he’s dumped on the dunghill where he belongs that suddenly all will be well, in the best of all capitalist worlds.

The escalating crisis enfeebles the Tory government and should be the signal for the organised trade union movement, working-class communities and socialists to launch mass struggles on pay, public services, job protection, safety at work, full average wages for sick workers – and to topple the entire, corrupt Tory razor gang.

We have often described Johnson as a vicious, anti-working-class reactionary masquerading as a buffoon. His right-wing populist pretence of being different from the upper-class Tory grandees helped the Tories win their 80-seat majority in December 2019. Many of the reptiles belatedly calling for his resignation to try to save their own skins became MPs through his shenanigans. And they have happily backed his corrupt regime for the past 2 years. Now that the ‘Party-gate’ scandal has further exposed this serial liar, making him an electoral liability, the Tory parliamentary rats are deserting his sinking ship.

Whilst the growing chorus of ‘Johnson must go’ is entirely justified, it would be utter folly – and a cruel deceit of the working-class majority population – to imagine his replacement by Rishi Sunak, Liz Truss or some other Tory worthy would make any difference to the growing crises facing ordinary people, including the cost-of-living crisis.

The High Court has this week found the entire Tory government guilty of illegally fast-tracking PPE contracts to their profiteering pals, providing them tens of millions in profit, whilst failing to provide workers with any proper PPE.

The same applies to the outrageous failures by privatised Test and Trace schemes. The Tories, and the capitalist employers they defend and enrich, have blood on their hands.

Tory privatisation of energy suppliers – sustained by successive Labour governments – has led to the collapse of cowboy energy companies amidst free market chaos, which working-class people are paying a terrible price for, through rocketing fuel bills. As an example, my own family’s monthly fixed tariff rose from £64 to £104 in November – a leap of 61 percent!

Even money expert Martin Lewis was in tears as he confessed he could do absolutely nothing to help a family unable to pay the price of heating their home and eating. And that’s even before the predicted £500-600 further increase households face in April, as the Tories raise the fuel price cap. Instead of taking all forms of energy into public ownership, to eradicate the profiteering, the Tories are predictably bailing out collapsing capitalist firms with taxpayers’ money; for example, gifting the owners of Bulb £2,000 per customer, but leaving these outfits in the hands of the privateers who have profited for years. As millions suffer fuel poverty the energy monopolies see their profits surge.

Governments’ incompetence in the face of COVID-19, rooted in putting profit before people, has seen the wealth of the world’s billionaires turbocharge from $8 trillion to $13 trillion in just 12 months, whereas working-class people have suffered mass deaths, massive pay cuts and job losses. Like wars, pandemics are good for some: energy giant Shell has just replaced drugs barons AstraZeneca at the top of the FTSE 100 index.

The rage at the Tories has peaked at their display of arrogant self-entitlement, wilfully ignoring the COVID-19 regulations they imposed on the population at several Tory booze-ups. However, this public fury goes deeper than that: the Tories’ corrupt practices over contracts; their cavalier failure to act swiftly to protect people from the virus; the near-collapse of the NHS and burnout of frontline staff after decades of consciously-planned austerity; their encouragement of fire-and-rehire tactics by employers, to crucify workers’ jobs and conditions; the escalating cost-of-living crisis as inflation reached 7.1% in November (the highest in at least 30 years) whereas average pay deals last year were 2 per cent; scrapping of the £20 Universal Credit uplift; abolition of the triple lock on pensions…

There needs to be a day of reckoning for the multiple Tory crimes against working-class people. The current mayhem engulfing what historically has been the strongest, most successful and ruthless capitalist party in the world should be seized by the leaderships of workers’ organisations as an opportunity to fight back, mobilise action, and reverse the slaughter of living standards suffered by millions.

The potential for a coordinated, systematic counter-offensive by the organised working class, their families and communities is shown by the increased outbreaks of (mostly localised) struggles – particularly on issues like pay and the bosses’ fire-and-rehire atrocities. This upturn in action is underpinned by an increased awareness of the key, indispensable role of the working class in making society function, revealed to millions during the pandemic.

Workers in the Clarks shoe factory in Somerset have given the boot to fire-and-rehire by sustained strike action and demonstrations. Previously prolonged strikes by Manchester bus-workers and pre-Christmas strikes by Weetabix workers likewise defeated this vicious new weapon being deployed by employers.

Wincanton drivers won a 24% pay rise by striking for two months. The threat of strikes by Tesco distribution depot workers won at least an improvement on pay. Encouraged by the fighting stance of recently-elected Unite general secretary, Sharon Graham, strikes and threats of industrial action have conquered £25million extra in Unite members’ wages during the first 100 days since Sharon was elected. Several groups of railway workers are out on strike, as are some offshore workers.

Determined and high-profile strike action by Glasgow City Council cleansing workers has at least forced the beginnings of renovations in the decrepit, disgusting conditions they suffer in the depots, but they are likely to stage a new wave of action against the failure of the SNP Council to grant Covid bonuses, a decent pay rise, or upgrades to these key workers – who wallow in the lowest-graded jobs. As their GMB convener Chris Mitchell told me, “The council’s service reform has created posts that make no sense on £40-80,000 salaries for a few people at the top, but done sweet FA for the workers or people of Glasgow.”

Thousands of low-paid Glasgow city council workers – overwhelmingly women – are gearing up towards further strikes to win interim pay-outs denied to them since the victorious 2018 equal pay strike, and to enforce equal pay which is still not applied to these key workers 52 years after the 1970 Equal Pay Act.

University staff increasingly see themselves as part of the working class as they prepare for renewed and increased strike action on wage cuts, pay inequality, job insecurity, impossible workloads and robbery of their pensions.

Mostly young bar staff in Dundee and Glasgow are spearheading battles against a litany of crimes by the trendy bar owners during the pandemic, ranging from pay and failure to provide COVID-safety measures to bullying, sackings and sexual harassment.

Another likely arena of struggle in 2022 is local government, based on the SNP/Scottish Greens government budget cuts of at least £371million to local authority funding, on top of previous cuts of £3-4billion in the past 11 years.

Alongside venue closures, prohibitive charges to community groups for venues, pay cuts and staffing cuts, the Scottish government budget for the first time since 2007 empowers councils to add uncapped Council Tax increases to the assault on working-class people’s living standards.

Multiple strands of separate struggles need to be combined into a rope to strangle the Tories.

The potential power of the organised working class needs to be built into coordinated action to take advantage of the crisis-riven Westminster government – to drive back the tide of attacks on pay, benefits, jobs and public services.

The SNP/Scottish Green Party government has zero intention of seizing this moment to mobilize the Scottish people in a mass movement to win back resources stolen by the Westminster razor gang, which is precisely what any socialist Scottish government would do.

Instead, they clearly intend to continue their habit of devolving the cuts initiated by Westminster, rather than defy and defeat them. That puts the onus on the trade union movement and Scottish TUC to spearhead mobilisations through rallies, demos, well-prepared strike action and solidarity with people in struggle to resist the onslaught and begin to reverse the barefaced robbery of wealth by the rich from the rest of us.

It has been shown by research that such a package of measures – part of a Socialist Green New Deal – could create over 350,000 new, green, skilled and unionised jobs in Scotland, thereby opening up vistas of hope rather than despair for working-class people of all ages; combating poverty and pollution in a green industrial revolution.

Mobilisations in the short term – seizing the time when the Tories are at their most vulnerable – could begin to embolden workers and young people that sweeping change is possible, starting in 2022. Failure to exploit the Tories’ difficulties as the workers’ movement’s opportunity would be criminal – allowing the Tories to regroup and savage the lives and livelihoods of the working class.

United movements need to be urgently built around a series of fighting demands, such as: