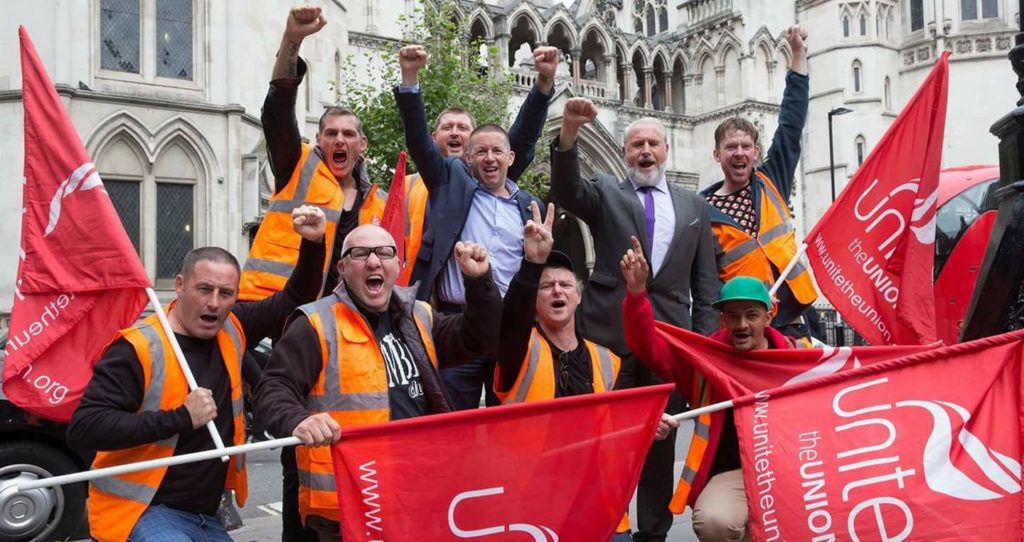 In an important victory for all workers fighting austerity, the High Court has ruled (on 20 September) in favour of Unite the union and ordered Birmingham Labour city council to withdraw the compulsory redundancy notices they’d issued to 113 safety critical refuse collection workers.

As part of the legal ruling, the union has agreed to suspend industrial action until a full Court hearing. This is, at the very least, a temporary victory for workers who faced the options of the sack or a £5,000 pay cut within weeks – from a Labour council, yes, a LABOUR council!

The battle of the Birmingham bin workers is an acid test of the readiness of trade union leaders to lead decisive action against the slaughter of jobs, wages and safety standards in the Age of Austerity. But it’s also a critically important object lesson and acid test of the role of the Corbyn-led Labour Party.

Workers angry at constant attacks on our conditions – including by local councils – should be greatly emboldened by the courageous action of the Brummie bin workers. But the hundreds of thousands of people who have invested their hopes of something entirely different from Labour under Jeremy Corbyn’s leadership – or indeed those who now hope Richard Leonard will win the Scottish Labour leadership against the millionaire, poverty-paying, non-union employer, Anas Sarwar – have a lot of soul searching and harsh questions to face up to from the experience of the Birmingham showdown.

Background to the Strike

Back on 16 June, Unite the union won a 90% majority for strike action by the Brummie bin workers against the Labour council’s plans – in their cynically genteel phrase – to “delete” all 122 Grade 3, supervisory jobs; the leading hands on the teams collecting household rubbish. These safety-critical workers, on as little as £21,000, faced being fired, then offered jobs as bin collectors on £5,000 lower wages!

In a drive to save £5m a year, the Labour worthies and council officials – whose chief executive Stella Manzie is on £180,000, plus almost as much again in expenses! – also, plan to turn the 4-day working week into a 5-day system. They are demanding collection from an extra 50-70 households per (shorter) day – on top of the frequently unmanageable current daily target of 1,500 households. All with the false claim of “a more effective, efficient and modern refuse service.”

As one of the strikers (of 22 years service) explained, he gets up at 4.45am, to start at 6am. Others start at 5am. They get a 15-minute concession break at 9am, during which they are obliged to eat in the bin wagon “with only wipes and hand sanitizers because of the regular management intimidation over our productivity”.

Birmingham seems to be the only council that insists on refuse collectors getting bins from the side of the house and returning them there, rather than the kerbside, closed-lid collection everywhere else. This slows down the job, but then workers are berated and bullied by management for their productivity.

Safety Critical Workers to be ‘Deleted’

The job of the Grade 3 workers the Labour council wants to ‘delete’ is safety critical. The council want to dump their safety tasks on the drivers. But the drivers’ vision is restricted, as they operate 12-tonne trucks, twice that weight when full.

Kids run out from behind cars. Residents risk life and limb throwing rubbish in the back, where the lifting mechanism operates by sensors and can crush you to death. Motorists rushing to work are abusive on a daily basis, get too close, and in one case drove into the back of the wagon and nearly killed the loader.

Birmingham is the only council not to have a route risk assessment, despite demands by the union for years.

As well as the physical safety of the public, the Grade 3 leading hands look out for other loaders, 40-50 per cent of whom are hired as agency workers on zero hours contracts, replaced daily on routes, continually forced to waive the right to permanent jobs – in at least one case for 9 years!

This dispute echoes some of the issues around Driver Only Trains. But it’s a Labour council that’s acting like a bunch of dictatorial, Tory-backed bosses.

Strikes began on 30 June. Through the conciliation service, ACAS, a deal was reached between the Labour council and Unite on 15 August, including: “The council agreed in principle that Grade 3 posts will be maintained. Consequently, there are no redundancy steps in place.” In return, the union called off the strikes and agreed “to recommend to their members work pattern changes, including consideration of a 5-day week.”

The same Labour council spent a fortune hiring agency workers and contractors to try and undermine the strike action.

By 30 August, the council reneged on the deal, issued 113 redundancy notices to Grade 3 bin loaders, with the Labour council leader denying a deal had ever been reached – which ACAS took the unprecedented step of publicly contradicting – and claiming it was “unaffordable”. Aside from the appalling failure to uphold an agreement, the council’s claims don’t match the £269million increase in ‘useable reserves’ in 2016 – to a total of £895million. The same Labour council spent a fortune hiring agency workers and contractors to try and undermine the strike action.

Aside from the appalling failure to uphold an agreement, the council’s claims don’t match the £269million increase in ‘useable reserves’ in 2016 – to a total of £895million. The same Labour council spent a fortune hiring agency workers and contractors to try and undermine the strike action.

Their betrayal of all trust in the deal they agreed through ACAS provoked the resumption of strike action from 1st September, when the Labour council handed out very real redundancy notices.

The Labour council’s actions suggest they are not only hell-bent on slashing wages and conditions but breaking the union too, perhaps as the prelude to privatisation.

They threatened disciplinary action again bin workers who not only took daily strike action for 3 hours, but also dared work to proper health and safety standards by returning to the depot for their breaks – instead of eating in a germ-infested bin wagon with no wash facilities. The council threatened to withdraw all pay, not just for the 3 hours on strike, but for the entire day. A blatant case of victimisation of workers engaged in legal strike action.

The council pumped out propaganda about the threat of future equal pay claims making the deal agreed at ACAS unaffordable. But this has since been exposed as a complete sham; cover for their cost-cutting, safety-threatening plans to ‘delete’ the Grade 3 jobs and slash wages. In the High Court case taken by Unite the union against the redundancy notices, the council’s legal team never once raised this claim of unaffordable equal pay claims.

The bin workers refused to be cowed. They voted by 92% in a 72% turnout to extend strike action by another 12 weeks. They won local support in rallies at the council buildings. They won unanimous support at last week’s TUC conference, which supported the bin workers and condemned the Labour council for reneging on the ACAS-facilitated deal.

In an appalling indictment of a Labour council, Unite initiated a food bank for the strikers this week! Now, their firm stance has helped win the High Court ruling that has forced the council to withdraw the redundancy notices.

These bin workers need and deserve our solidarity until they win an outright victory. In defence of safety, wages and conditions. But there’s also a broader issue, especially for those who’ve placed their hopes for workers’ rights and livelihoods in the Labour Party since Jeremy Corbyn’s welcome elections as leader.

For all the talk of Corbyn’s Labour being anti-austerity – and winning mass support with that message in England – here we have a Labour council acting like the worst, anti-union Tories, carrying out austerity at a local level.

And just as we’ve written elsewhere, not once has the Corbyn leadership issued a clarion call on their own Labour councillors to resist Tory cuts. Where has there been a word of criticism of Birmingham Labour council from the same national Labour leadership? 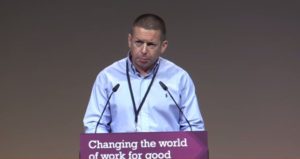 A very telling contrast in speeches at the TUC should be grounds for serious thought for all those pinning their hopes in Labour. Unite assistant general secretary Howard Beckett moved the Motion supporting the bin workers in a barnstorming speech, declaring:

“We have a duty as a labour movement to find a resolution to this dispute as soon as possible.”

There’s not been a word of condemnation of the Birmingham Labour councillors from Jeremy that I can trace. There’s certainly been no withdrawal of the Labour whip, nor outright expulsion, of these anti-worker, anti-union, austerity-wielding Labour councillors by the Corbyn leadership. And many bin workers are increasingly asking where the national Labour leadership have been during the strikes and rallies; they’ve not attended any.

And at a local level, when I politely asked left-wing Labour activists about the Brummie bin strike at the recent launch of Richard Leonard’s campaign to become Scottish Labour leader, they hung their heads, and shuffled into the rally in silence.

Socialists cannot remain silent on such a critical confrontation between workers and their union on one side, and an axe-wielding Labour council on the other, with jobs, wages and safety at stake.

Political parties should be judged by their deeds, not just their words.

The dirty deeds of Labour on the Brummie bins battle should be a powerful lesson to all trade unionists looking for a socialist alternative.

And for all the Scottish Labour left’s talk of independence being a threat to working class unity and solidarity, they appear disappointingly silent on offering solidarity to Birmingham workers in brutal conflict with a Labour council – whereas the pro-independence Scottish Socialist Party hasn’t hesitated to take sides with these trade unionists in England’s second city.