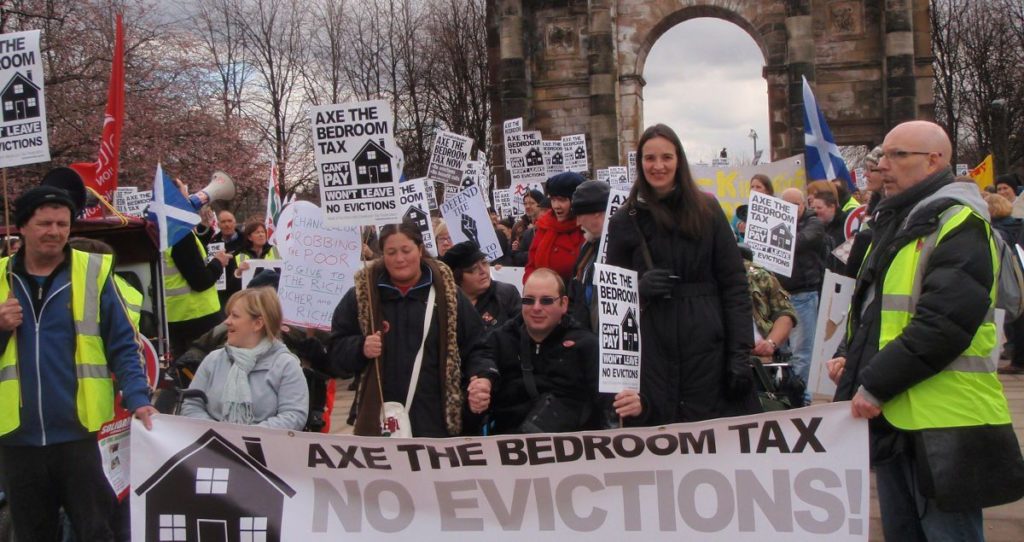 Let’s be clear; the bedroom tax is not a tax at all and it is certainly not a ‘spare room subsidy’! It is a benefit cut which will affect 600,000 people in the UK, 100,000 of them in Scotland. Those affected are the most vulnerable in our society. It will cruelly affect 400,000 disabled people, the low paid, separated families and single people. It is a vile piece of legislation that needs to be scrapped!

The Governments own impact statement states there is a “lack of one bedroom accommodation in the social sector.” So they admit there aren’t enough one bedroom flats for people to move into. So where will people move to? The only answer is the Private Sector. But private rented housing is far more expensive than social housing. In England for example the average private rent is £163 per week while the average social housing rent is £83. The National Housing Federation commissioned a study of 95,000 households and reported that if those unable to get a one bedroom social home and went into the private sector, benefit claims would rise by £143m.

David Cameron says the Government is increasing Discretionary Housing Payments [DHP] by £30million to help disabled people who will be adversely affected by the ‘bedroom tax”. But the National Housing Federation calculates that if you spread the £30m equally between every DLA claimant, they would each receive £2.51. The average ‘bedroom tax’ for disabled people is £14!! It is estimated that around 2000 people in my Council area of Renfrewshire for example will be affected by the Bedroom Tax at an average of £13.40 per week. In order to meet these costs the Discretionary Housing Payment allocated to Renfrewshire would need to be £1,393.600.00. They have in fact been awarded £251,714. A shortfall of £767,315. It is obvious then that, even with the increase in DHP, there is not enough funding to support all those who will be affected by the bedroom tax.

There are shops in my area that sell single eggs as that is all customers can afford. That is how hard the poorest have been hit by this recession. Families, in work and out of work, are struggling to feed themselves. The ‘bedroom tax’ could be the proverbial straw that broke the camel’s back. People will have to pay the extra rent. But they will not have enough money for gas/electricity or for food. People who cannot pay the extra rent face eviction. The eviction process is expensive. ‘Shelter’, the housing charity, estimate that an eviction cost the taxpayer £26,000 and the housing association £6,000. That is money that could be better spend on housing. Many local housing associations fear that the lost rent will force them into bankruptcy. And my own local council in Renfrewshire estimates it will lose £1.8 million in lost income due to the bedroom tax alone.

The bedroom tax will not save money and it will not solve our housing crisis. What is needed is massive investment to build new houses and reform the housing system.

It is wrong that the most vulnerable are hardest hit by it! It is wrong that fuel, food prices, profits are rising but wages are going down! It is wrong that the Government will ‘tax bedrooms’ but not cap rents! It is wrong that as the Government implements the bedroom tax it also gives tax cuts to the richest in the country! I believe we need to radically reform our political system, our monetary system and our economic system. The large parties only care for themselves and the views of the voters are an afterthought. I hope that the no2bedroomtax campaign will awaken the people of the UK and return some of the political power that has been stolen from us.

It is vitally important that local communities unite and protect the defenceless in their area. That is the only way for this country to change for better. Communities that are united are strong. Speak to you neighbour, family and friends about the bedroom tax. Set up a local meeting. Arrange a demo or a march. That way we can win.

Alan Wyllie is a founder of the ‘No2BedroomTax’ Campaign.