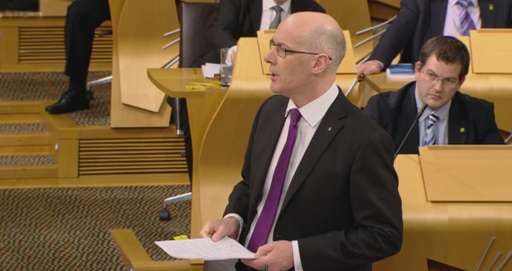 The former Lothian MSP added: “Whilst it goes without saying the powers available to Holyrood are insufficient to fully address the needs of working people the fact remains John Swinney has again shown he has no intention of using even the existing powers to these ends’.

“The council tax, for example, is to be frozen for another year despite the Commission on Local Tax concluding yesterday that it was both regressive and unfit for purpose. Freezing the council tax simply accepts its unfairness. The SNP once promised to scrap it and replace it with a progressive tax based on ability to pay as the SSP advocates. But bank manager Swinney is now too cautious for that.

“Holyrood has also been given extra borrowing powers – to raise up to £380million – and yet this option was not exercised either.

“And the sums allocated to addressing Scotland’s chronic shortage of affordable housing were just piddling when measured against the scale of the problem. There are 200,000 families in Scotland on social housing waiting lists and yet the SNP aim [and will again likely miss its target] to build just 8,000-9,000 “affordable homes” a year.

“It has a similarly insipid approach to fuel poverty. One in three households in Scotland are struggling to pay their heating bills and yet the SNP apparently believe £100m will ‘address’ the issue. In 2007 they promised to ‘eradicate fuel poverty in Scotland’ by 2015.

“The Deputy First Minister’s insipid ‘managerialism’ is now in it’s 9th year. He hides the fact Scottish economic growth is miniscule. And so are the sums of money he allocates to solving our nations biggest social problems. Poverty wages, a chronic shortage of affordable housing, lack of opportunity for working class kids, fuel poverty and widening inequalities all require his immediate attention and yet with his neo-liberal economic programme Mr Swinney has shown he is not the man and the SNP are not the party to solve them.”

One thought on “ANOTHER ‘NOTHING TO SEE HERE’ SPENDING REVIEW’”