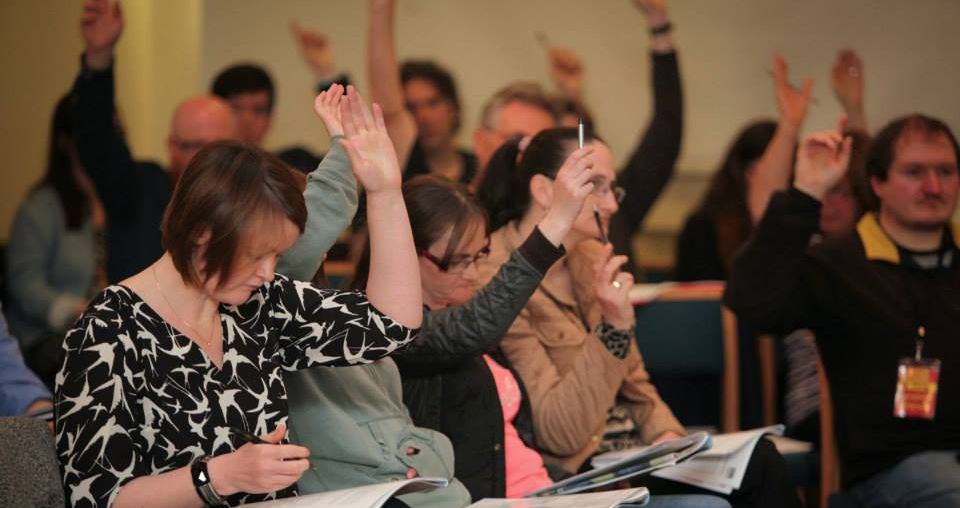 Like most of my comrades, I felt rejuvenated at being at the SSP conference. The motions were inspiring and well thought out. The good thing about our party is that debate is encouraged; National Councils and Conferences are a highlight for ordinary members who work so hard in their branches and truly share common values. I would like to remind ordinary members that they are also welcome as observers at our monthly Executive Committee meetings, where those chosen at conference have to make decisions with the consent and elected trust of the wider party. I am proud that we are open and inclusive and all of our structures are transparent.

At conference we voted to enter negotiations with the Scottish Left Project. We heard passionate discussion on both sides where people laid themselves bare but were prepared to do that for the debate and to inform others. We heard from Myrto Tsakatika from Syriza and Jonathon Shafi from the Scottish Left Project. The words of Myrto echo in my ears, “Another Scotland is necessary”. With the Tory attacks coming our way it is. Let’s remember that austerity doesn’t only demonise poor people but those who work in the public sector. Cuts are impacting on the most vulnerable and cuts are impacting on worker’s jobs. What will happen if the libraries and museums in Renfrewshire are coagulated into a private trust? What will happen to the users of services and the terms and conditions of those who work for us? From public health consultants to librarians with their skills to those working to maintain council houses whose hours are being cut.

Great challenges are ahead for those who have the support of the traditional weapon of Trade Unionism but what about those who do not have a voice or someone shouting out to represent them. Those without work, carers, people with disabilities who will experience the most devastating cuts in Osborne’s July budget because they are deemed to be “benefit units”, not real people described in Dickensian linguistics. A cruel irony as Dickens used his language to share the experience and grind of day to day poverty which ended up creating a holistic poverty and stigmatization. I wonder what Goffman would have written about in 2015? Though his analysis remains sound, people are stigmatised and alienated.

How will this affect the left who offer an alternative? Well we need to continue talking to real people – outside the box. To be a real anti-austerity movement which offers hope like in Greece we have to make politics real. That is why I am not calling for a “Scottish Syriza” but a movement all of our own, fundamentally based in the experiences of those who live in Scotland as Syriza is based in the experience of the Greek people. To ensure this happens we need to talk to people about their lives and what they want to change. We can be part of the anti-austerity movement of Europe. We need to be! Let’s make this happen most of all we need to engage in our communities, engage in real lives. That is the lesson to Syriza for us all.

So after conference I spoke to working class party members who are experiencing the cuts. One of them spoke about the folk given chits to buy second hand sofas from the welfare fund which replaced community care grants which gave folk choice in choosing the things that are essential. Not long til tackety boots are purchased by the parish. These meant when you knelt down for communion, everyone could see these were bought by the parish. Do we want to go back to these days? Of course not, but I fear our society is sleepwalking in that direction. Let’s challenge the impact of austerity now by helping folk that is why we are part of the left.

Sandra Webster is the national co-spokesperson of the Scottish Socialist Party.