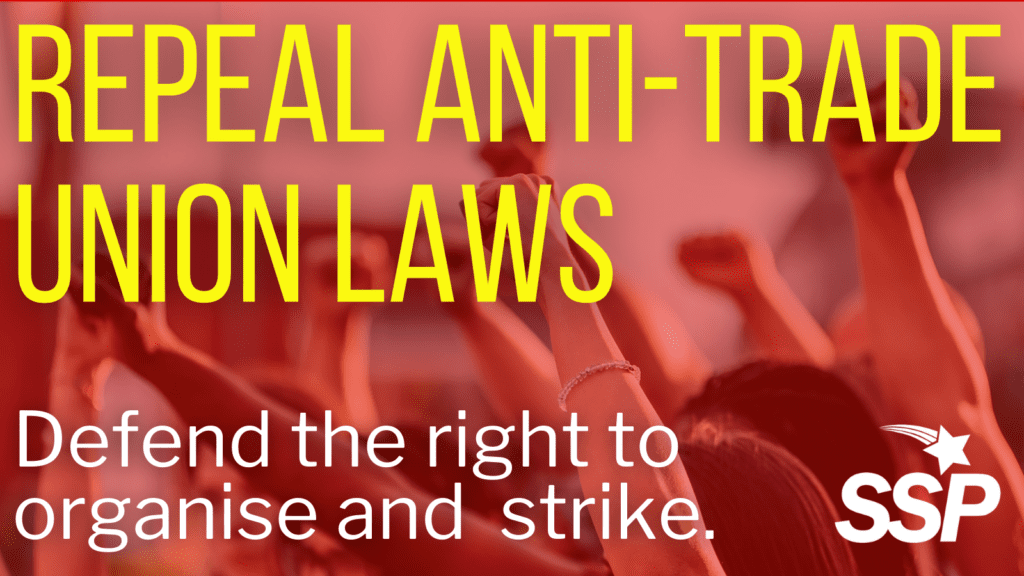 The Scottish Socialist Party is a party of workers – rooted in working-class struggle. We firmly support organised workers in Trade Unions fighting for jobs, pay, and conditions.

Trade Unions are the largest civil society organisation in Scotland, with the potential to drive forward change that tackles poverty, inequality, exploitation, and the climate crisis together.

For the working-class, Trade Unions are an essential democratic space – to organise, to learn, and to act. There cannot be a functioning democracy without unimpeded, member-led Trade Unions.

But the UK has some of the worst, most repressive, and therefore most undemocratic anti-Trade Union laws in Europe.

We need to build fighting Unions that are member-led, and that stand up for workers against the bosses. We can and must build a mass-movement for political and economic change in Scotland – and that begins with everyday struggles in our workplaces.

Every worker should join and build their Trade Union.

The Scottish Socialist Party demands the repeal of the UK’s repressive and undemocratic anti-Trade Union laws.

The SSP calls for a reinstatement of full, free collective bargaining in all sectors and workplaces, including on wages, conditions, training, equalities, and health and safety.

We must protect the legal right to freedom of association through joining and organising a Trade Union without fear of victimisation, and to freedom of speech through going on strike – including the right to solidarity strikes – while removing the undemocratic ban on so-called “political strikes”.

We must protect the right to strike after a simple majority vote, abolish outdated rules for postal-only voting, and end unjustified requirements to inform employers before workers are balloted.

We need to ensure that precarious, short-term, and other temporary workers have unimpeded access to a Trade Union without victimisation; that there is a guaranteed Trade Union presence beside every worker in contract negotiations.

Union reps should have rights and facilities to represent members during working hours, and we must make sure that those reps and officials can openly recruit for their Union in workplaces.

The SSP supports a radical expansion of workplace democracy.

That includes having boards of management made up of elected, accountable representatives of workplace Trade Unions, and worker and Trade Union control of workplace health and safety through elected Health and Safety stewards.