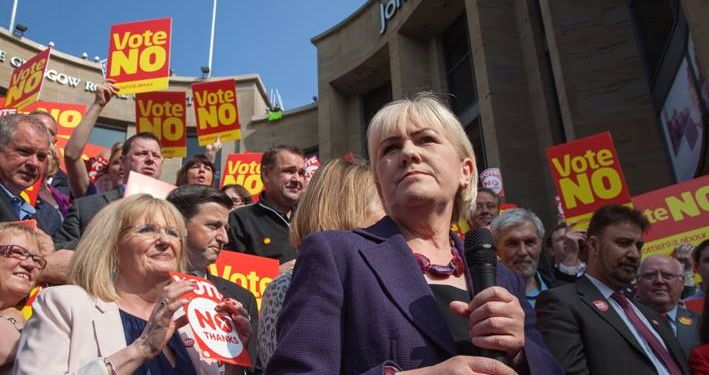 Decade long infighting has come to the boil, and Murphy’s refusal to resign in Scotland serves to further crucify their electability. Blairite murmurs south of the border can be used as a marker for things to come, further solidifying the need for a united left alternative in Scotland, past the SNP.

Over the weekend Peter Mandelson expressed an opinion shared by many prominent figures south of the border in the wake of Labours semi-catastrophic performance on Thursday. The party had moved ‘too far to the left’ under Ed Milliband. This analysis appears to be at complete odds with that proposed by many in Scotland, academic or otherwise right throughout the last decade.

The Labour party’s move to the right in the late 90’s was an important and contributory factor in Scottish Labour’s electoral demise. To suggest that going back to that platform could revitalise the party in Scotland is another gaffe in a long line of misguided diagnosis which has allowed the SNP to take control at Holyrood, and all but decimate their presence at Westminster.

It appears that Labour have completely given up on Scotland, they did in the final weeks of the campaign, and if those positioning themselves to run for leader are anything to go by, there is no desire to take back the old heartlands from a determined SNP. Fighting on multiple fronts: against UKIP in the industrial north, and the Lib Dems and Tories everywhere else, they have had to prioritise, and it is becoming abundantly clear how they are looking to do so. The rhetoric espoused by Mandelson which has been echoed by others illustrate a feeling that at the UK level the party is best served fighting to gain those seats from the centre right, as opposed to winning the battle on the left, a battle predominantly fought north of the border. Considering the current political climate, is there any other course for success at Westminster?

Jim Murphy went from screaming unionist to self styled Scottish patriot in three short months, and no-one would put it past him to revert back to his default Blarite setting given the opportunity. This would compound an already mammoth defeat, and make the road to recovery that much harder. In short, he has to go, and the party must become independent of a probable right leaning national party if it hopes to stand any chance in Scotland again.

Neil Findlay, an MSP beaten by Murphy in Decembers leadership race is as left as they appear to come in the parliamentary Labour party. His resignation from the shadow Scottish cabinet further highlights the fear of impending doom for the remnants of Labour’s left.

Whilst that might be stating the obvious, Findlay ran on the mantra of a need to fight the SNP from the left, which begs the question, what does ‘New New Labours’ imminent rise mean for those left of the SNP?

In England there is the Green party, pushing a progressive charter, and in Wales Plaid Cymru, looking to fight austerity whilst delivering equal powers for Wales. In Scotland however, whilst a Green presence is felt, there is a definite appetite for something bigger. When anti-austerity politics is the consensus, the radical left have an opportunity to organise and form a cohesive alternative to the SNP, now that they have an abundance of seats at both Holyrood and Westminster.

The resurrection of the right in the Labour party may have serious consequences for a number of traditional mechanisms, with the affiliation of the trade unions being the primary one. Ed Milliband adopted an ‘opt in’ policy as opposed to the traditional ‘opt out’ one operated for years prior, a move which greatly cut the financial and ideological support of union members and hence trade unions as a whole. He, like his predecessor, was fixated on tightening union influence. If he was the left, then it can be reasonably deduced that a return to the politics of Blair, politics which were vigorously anti-union, may spell the end for the ties which have bound for over a century.

This could spell the end for formal trade union involvement in party politics, or it could mark the start of a new and prosperous alliance with an organised movement or party unequivocally on the side of the worker. A movement which would use the funds sourced as part of such an alliance to the absolute benefit of those providing them, a prospective means to meaningful and pertinent professionalisation and organisation of a radical and inclusive left alternative.

Whilst the SNP have been a much welcomed change to a stagnant Scottish Labour Party, their credentials as a truly progressive leftist party are more than questionable. Most wait in contented expectation of the 56 elected to Westminster’s ability to deliver, trusting that they can stem the tide of social and economic violence practiced by the Tory’s. We all wish them well, and hope they can be a strong left of centre voice in the commons.

Whilst the imminent move to the right at the UK level forces the hand of Scottish Labour, it will almost certainly not result in a party reborn to the left of the SNP. This provides an opportunity for new alliances to form and organise, the gap to the left of the SNP that Labour have failed to fill for some time is prime real estate, and one to be filled with a coherent and organised movement.