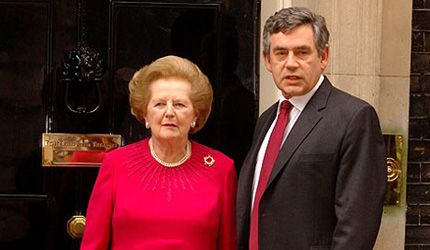 Amidst all the warm words marking the 30th anniversary of Thatcher’s 1979 election victory one thing is certain—the New Labour government is her greatest admirer and direct descendant.

At the heart of the New Labour project lies its complete rejection of any Socialist politics and endorsement of the Thatcherite view worshiping the free market and the rich.

So after twelve years of majority New Labour government we still have the most repressive anti union laws in Europe, a growing gulf between rich and poor and a government wholly at the service of big business.

That’s why lifeboats loaded with billions have been dashing to the rescue of the bankers who not only steered the financial Titanic into the iceberg but actually created the iceberg itself.

In contrast Glasgow schools are closed by New Labour to save a mere £3 million a year , thousands languish on lists for houses, unemployment climbs and huge service cuts loom.

What we now face is the brutal reality that the supposed triumph of the market was just as much a myth as the supposedly unsinkable Titanic.

And with the financial crisis has come a growing crisis for Prime Minister Brown who, despite all the hot air of being a left winger, is in truth a fully paid up member of the Thatcher fan club.

This is, after all, the man who had Thatcher round to tea almost as soon as he became Prime Minister – going far beyond protocol by escorting her from her car into the building like a favourite auntie.

Now both the greed driven economy he championed and the government he leads lie in ruins teetering on the brink of disaster.

Despite the smoke and hot air about the Brown government’s conversion to socialism hyped by the right wing press on the back of a modest tax rise for the rich the truth is out.

The cost of saving the bankers from their own greed will be carried by working people through sackings, slashed services, frozen pay and higher prices.

And we are not talking about a few months of misery but a diet of hard times lasting up to twenty years for the workers to pay off the fat cats’ loans.

As one commentator neatly put it “it is ice from here to the horizon”.

However contrary to what the well fed politicians and “experts” preach there is an alternative to the majority enduring hard times to save the skins of the greedy elite.

This can be summed up in the slogan adopted for the European elections by the SSP of Make Greed History which has at its heart the demand that the rich pay for the crisis they caused.

Perhaps the most important single lesson from the banking crisis is that –despite what people were told—the money was there all the time.

In almost every TV news broadcast somebody expresses this now widely understood new common sense. The billions spent to save the City have surely killed stone dead the old refrain of “we can’t afford it.”

Just as with war, when the fat cats squeal the cash is found and the left needs now to put this key fact at the centre of its campaigning.

Faced with an unprecedented economic crisis which is running alongside a perhaps even more serious environmental emergency we need to hammer home that there is another way.

Only a radical break with capitalist greed starting with a wealth tax to claw back the cash gambled away by the rich can provide an alternative to falling living standards and slashed services lasting for decades.

Last week one expert was reported as saying that despite the millions poured into cancer research resulting in new drugs these might be “too expensive” to give to patients.

This breathtaking statement spotlights the reality at the heart of market economics. The skills, expertise and knowledge exist to solve the social, environmental and health problems we face.

But while the market rules this will only happen if the price is right and profits to be made.

Rather than twenty years of hard times to help rebuild the profits of the few it is time to move decisively to put people in charge of money rather than the other way around.

There are a galaxy of needs—for decent homes, viable free transport, better healthcare, ending pollution, expanding education—which can be met from our skills and expertise.

It is not lack of money which prevents this but what that money is used for.

The last great slump in the 1930s only ended with colossal waste of human and material resources poured into a world war.

The Left needs to act now to ensure that this time the answer is found in jobs not bombs and that power is shifted from the privileged few to meet the needs of the millions, putting people before profit.