The SSP submitted a contribution to the Draft Independence Referendum Bill. While the questions were largely technical in nature, we included a covering letter to ensure that our thoughts on a second referendum are clear and unambiguous.

While it is important to review arrangements for the organisation of the next Independence referendum, the Scottish Socialist Party believes that thought needs to be given to the political context of that referendum. The issue of independence is not simply a constitutional question; in which independence is an end in itself. Rather, it should be seen as a means to an end. The purpose of independence is to provide a vehicle for the transformation of society; to create a Scotland radically different from what we have at present. This approach should also inform the next referendum campaign. 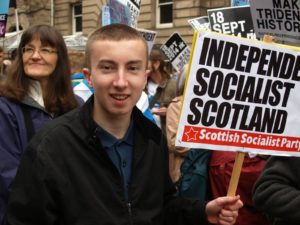 The argument needs to be that if you vote for independence it will improve your life and that of your family and community.

Most opinion polls show that – like the last referendum – people from poorer backgrounds living in more deprived communities were more likely to vote Yes than those from more affluent backgrounds. Likewise younger people were more likely to vote Yes than elderly people. This is because the former have less stake in the current system and and are more likely to see the potential with independence. In contrast; elderly people and those from more affluent backgrounds had a greater stake in maintaining the status quo. To win the next referendum we need to engage with young people and those from more deprived backgrounds with the core argument that independence can change their lives while obviously trying to win over other sections of society. The aim should be to win working class people, representing the overwhelming majority in society, to the cause of independence. This should be done with a programme and campaign that addresses their aspirations. If we fail to do this, then the chance of winning the next referendum is greatly diminished. 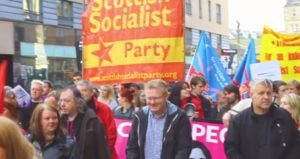 Barring outliers, opinion polls since the referendum in 2014 have been consistent with 45% saying they would vote Yes and 55% No. This shows that support for independence is remarkably resilient despite the lack of any independence campaign, voter election fatigue and a weakened Scottish economy. If these were the figures going into a new referendum campaign the independence movement would feel confident in winning the final vote in a campaign where momentum would be with the independence movement and facing a fragmented unionist campaign led by the hated Tories.

The Scottish Socialist Party played a significant part in the last referendum campaign and is ready to do the same in the next. The referendum is there to be won and we should go into the campaign with optimism and confidence ready to begin the process of the radical transformation of our country.