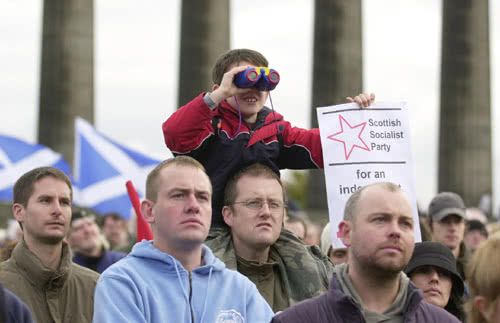 More than 150 years ago, Karl Marx and Frederick Engels called on the working class of all countries to unite and fight for a socialist world.

At a time when there were no telephones, no cars, no aeroplanes, no TV and no radio, their internationalist vision represented an extraordinary feat of historical imagination.

In today’s world of the internet, satellite TV, high-speed air travel, global capitalism and the World Social Forum, the philosophy of socialist internationalism no longer looks like a utopian flight of fantasy.

But what does socialist internationalism mean in practice?

“Imagine there’s no countries, I wonder if you can; nothing to kill or die for, a brotherhood of man”, sang John Lennon in his celebrated radical anthem.

Such a world may well be built sometime in the distant future by generations who are not yet born. But how do we begin to move from here to there? And how do we apply the principles of socialist internationalism to the 21st century world that we live in?

There are three key questions the left has to address. We may not reach agreement on the answers, but even to ask the questions would at least be a step forward.

First, does socialist internationalism mean that we are striving to replace capitalist globalisation with socialist globalisation? Are we aiming to build gigantic socialist mega-states? Or should our more immediate goal be to build socialism from below — a socialism that is based on decentralisation, diversity and voluntary cooperation?

Linked to that is a second question. Should socialists be in favour of larger, broader states under capitalism? Is bigger always better? Do large-scale multinational states unify and strengthen the working class or can forced unity from above sometimes aggravate national conflict and resentment?

The third question revolves around the process of change. Will socialism be achieved as the product of a single big bang, a simultaneous, worldwide revolt of the working class and the oppressed? Or, because of differing national conditions and traditions, will social change be more fragmented and disjointed? Will it tend to develop at local and national level first, before spreading outwards?

For those who subscribe to the “bigger is better” theory of internationalism, multinational states such as the United Kingdom represent historical progress. Whatever the social costs, the Act of Union and the destruction of the Scottish Gaedlltacht after Culloden paved the way for the rise of large-scale capitalism and the emergence of a powerful British working class. Any attempt by Scotland or Wales to break free of the United Kingdom today would be regressive step.

Logically the same arguments should be applied to the development of the European Union. Those trying to push forward towards a European superstate represent historical progress; while those Swedish and Danish trade unionists and women’s organisations who successfully campaigned against the euro were putting their own narrow interests above the greater historical project of internationalism.

Moreover, socialists in Canada and Mexico — and the rest of Latin America too, for that matter — should be advocating union with the United States of America on the grounds that such a continental state would unite hundreds of millions of working people from the Amazonian jungle to the Arctic Circle. After all, a manual worker in Toronto or Guadalajara has more in common with a worker in a Detroit car factory than with a Canadian banker or a Mexican landowner.

Unfortunately, all historical evidence illustrates that forced unity from above tends to inflame national division rather than eradicate it. The European Union, for example, rather than cementing international harmony has become a breeding ground for suspicion and division between nations.

The tides of anti-European resentment now surging through Scottish fishing communities are likely to foreshadow more widespread discontent as industrial communities in “Old Europe” become increasingly pitted against the sweatshop economies of “New Europe” after enlargement.

Swapping the Union Jack for the Saltire would not rid Scotland of inequality, low pay, pensioner poverty and the other problems inherent in any capitalist economic system. But it would allow normal class politics to develop more naturally than ever before.
Especially since the 1960s nationalism — in its broadest sense — has permeated every pore of Scottish political life. There are times when it has played a progressive role, for example magnifying the intensity of the campaign against the poll tax.

More frequently it has acted to deflect attention away from the real source of Scotland’s problems. Independence in and of itself won’t rid Scotland of these problems, but it would at least clear the way for politics to be fought out on the basis of ideology and class rather than on the basis of nation.

An independent Scotland would also mark an important democratic advance. From the 1980s onward, the Scottish labour and trade union movement spearheaded the battle for devolution.

Whatever the shortcomings of the Scottish Parliament, it has marked an important democratic advance, opening areas such as health, education, transport and the environment to public scrutiny and democratic accountability for the first time ever.

Yet there remains a democratic black hole at the heart of Scottish society. On the big decisions that really matter power is retained at Westminster, an institution which now has a virtually built-in, centre-right majority.

A further reason why the left should back independence is that the break-up of the United Kingdom would weaken capitalism and imperialism internationally. In Scotland, support for the union has always gone hand in hand with support for imperialism. Even today, the official title of the Tory Party in Scotland is the Scottish Conservative and Unionist Party.

The old British Empire has long gone but Britain continues to play a key role on the world stage as the staunchest ally of the US in its drive to conquer the resources of the planet for multinational capitalism.

The departure of Scotland from the United Kingdom would mean more than just the loss of a big chunk of territory. Scotland is a vital cog in the western military machine, with vital nuclear submarine and air bases. More than 80 per cent of all European Union oil reserves are in Scottish waters, while Edinburgh is the fourth finance centre in Europe.

The tearing of the blue out of the Union Jack and the dismantling of the 300-year-old British state would also be a traumatic psychological blow for the forces of capitalism and conservatism in Britain, Europe and the USA. It would be almost as potent in its symbolism as the unravelling of the Soviet Union at the start of the 1990s.

It is no accident that big business and the conservative right in Scotland are fanatically pro-union. The break-up of the United Kingdom might not mean instant socialism, but it would mean a decisive shift in the balance of ideological and class forces. Political attitudes in Scotland are not necessarily any more left wing than in some of those regions of England which have huge working-class concentrations, such as Tyneside, Merseyside or South Yorkshire.

But on a national scale, for close on half a century, the political centre of gravity in Scotland has been more heavily tilted to the left than in England.

That is reflected, for example, in the fact that the Tories have never won an election in Scotland since the 1950s. Media pundits down south may have proclaimed Old Labour unelectable in the 1980s, but Old Labour beat Thatcher hands down every single time in Scotland.

The one legitimate fear expressed by left-wing opponents of independence is that the unity of the trade union movement could be torn asunder. But that fear is groundless.

Generations after Ireland won partial independence, a number of British and Irish trade unions continue to organise on both sides of the border. There are many US-based trade unions organised in Canada. There is also close collaboration between the trade union movement across Scandinavia.

In today’s world of global corporations, trade union organisation will tend to transcend international borders, though that may well be accompanied by greater decentralisation within trade unions.

Independence is not a synonym for isolationism. In today’s globalised economy, it would be no more possible erect a new Hadrian’s Wall today than it would have been possible for Robert Burns to hop on board a transatlantic flight at Prestwick Airport.

Nor would anyone claim that it’s possible build a fully fledged socialist society in a small country on the edge of Europe. But what we can do is push forward in a socialist direction, blazing a trail which others will then follow.

As a general rule, social and scientific progress is not achieved by waiting until all conditions have ripened to fruition. The Wright brothers didn’t wait until the jumbo jet had been invented before flying across the sands of Kitty Hawk. Nor did Fidel Castro and Che Guevara wait until the USA was ready to break with capitalism before leading a revolution in Cuba.

With the victory of a majority SNP government on May 5, 2011, there will be an independence referendum in the next five years. That will be preceded with at least a year of wide-ranging constitutional debate on the history of the UK and its relevance today. For the left, there will no hiding place.

Silence will not be an option. We will have to spell out where we stand. Do we stand with the forces of conservatism on the side of the Union? Or do we strike out courageously on the side of change through participation in the Scottish Independendence Convention that could eventually pave the way to a new, socialist Scotland?