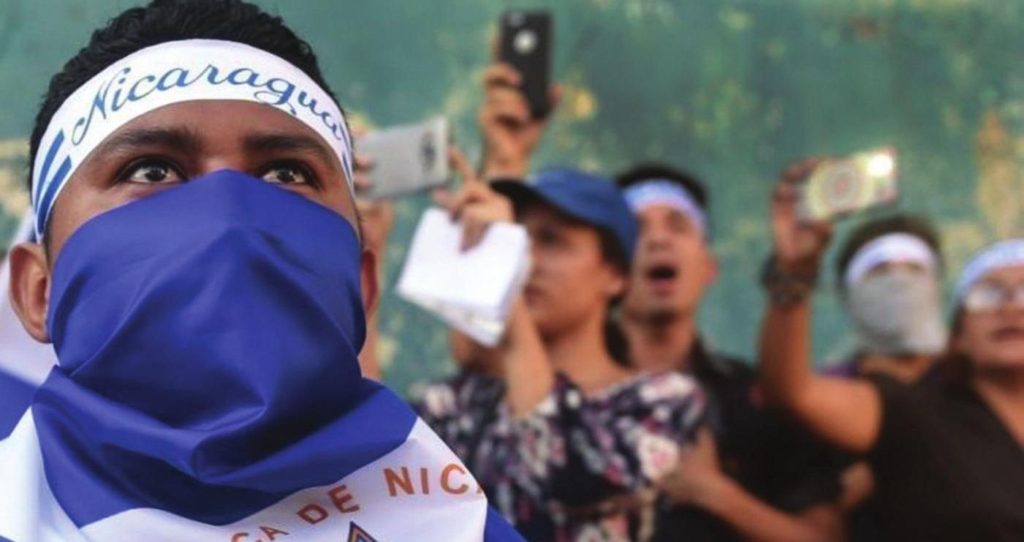 by Joyce McCracken, in Nicaragua

All over the world, the left proclaims itself as the future. A future beyond exploitation, beyond perpetual wars initiated by capitalism in its neoliberal mind and body. Sounds like good stuff.

The veteran Nicaraguan journalist Onofre Guevara López has a different take on some of the left. Writing in Havana Times, he has this to say:

“[An] outdated left, aren’t analysing the situation in Nicaragua as Marxists, but through their prism of nostalgia for a revolution which ceased to exist many years ago.”

He, like others, be they Marxist, non-Marxists, Christians or whatever, have long recognised that the Sandinista Popular Revolution of 1979 has been corrupted by President Daniel Ortega and his Vice President wife, Rosario Murillo.

For more than 100 days, protest, mostly by young people, and the repression of the Ortega-Murillo state, family circle and henchmen, are witness to that.

On the international plane, Ortega has his supporters and apologists. John Perry, who has lived and worked in Nicaragua for many years, is just one example among many.

Writing in The Guardian (27 July) he describes scenes of chaotic violence and arson in the city of Masaya, just south of the capital. I cannot challenge him on that. I wasn’t there.

He wrote of taking part in a “peace” march (his quotation marks) and being pelted with stones. He says “protesters acquired serious weapons such as AK-47s.” I have no trouble believing that what he says is true.

What he doesn’t say speaks volumes.

No word of paramilitaries armed with government-issued Russian and USA guns. In Nicaragua there have been many marches. Some might prefer to call them demos.

There was the ill-fated March of the Mothers in which a reported 15 people were killed, the March of the Flowers, the Pilgrimage. These were all protests by the opposition to the Ortega-Murillo government.

Of course the government has its home grown supporters too.

The Sandinista party is the best organised, most (government) resourced political party in the country. When government and Sandinistas march, peace is their key word.

“Say Yes to Peace”, “Nicaragua: Love Peace and Life” — these are the slogans and hallmarks of government marches. So John Perry’s “peace” march would in all reality be a government-inspired march.

Pelting people with stones, setting fire to government buildings, rampant intimidation and other forms of anti-social behaviour should not be condoned. But that, sadly, is the world we live in. Of course the USA State Department is delighted by this. What’s new? But no one here is calling for more neoliberalism, privatisation or austerity. The call is for justice and democracy.

On the day of the last national stoppage I was in the city of León. Driving past a factory, a components assembly plant, I saw hundreds of bicycles and motorbikes in the parking lot.

The plant is foreign-owned and no trade union existed inside those gates. No stoppage there. Does that make all the workers Sandinistas? I hardly think so. You can work out why they chose to turn up for work.

Like Masaya that day, the city of León had hundreds of barricades. Certainly there were youths with home made ‘morteros’.

The biggest and best built barricade I saw was at the end of the street where Sandinista party buildings are located. Sitting at the entrance was a man with a gun that looked like an AK-47 to me. The only rifle I saw all day.

By any choice of words, the present uncertainty in Nicaragua is no more than a mess on a national scale. The wheels have come off the political wagon. The Sandinistas, the various mutations of liberalism and conservatism are going nowhere.

The traditional parties have been rejected on a national scale. Hopeless and helpless. And that is why so many are calling for the Ortega-Murillo presidential couple to go. A new start and a better start. It’s possible.

It shouldn’t be that difficult to do better. At the Heodra teaching hospital in Leon around 35 medical staff, doctors, nurses and others were fired. They were individually given notice with immediate effect.

Dr Delgado, an oncology surgeon, was told he was fired while in the middle of an operation. Despite this and being told to go to the director’s office to receive his termination letter he finished his work with his patient.

What were the reasons for management’s actions? The hospital director reportedly claimed it was for “political” reasons, not professional competency related. The doctors had treated people injured in the civic disturbance and protested against government policy.

A group of Scottish activists with considerable records of solidarity work with the Nicaraguan revolution at it outset have published an open letter highlighting their concerns at the current crisis. They include: Paul Laverty, who has written scripts for Ken Loach films; Dr Louise Irvine GP, now in London stood in last two elections against minister of health; Norman Lockhart, then a nurse; Dr Margaret Craig, then a GP, Fiona Crawford, then a nurse.

This article was previously published in issue 510 of the Scottish Socialist Voice.