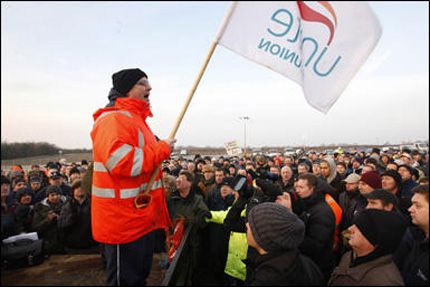 On Wednesday 28th January 2009 workers for Shaw’s construction contractors at Lindsey Oil Refinery in North Lincolnshire were told by their shop stewards that the new contractor, IREM, an Italian company that a part of the contract on LOR’s HDS3 plant had been awarded to, was refusing to employ UK labour.

IREM planned to house hundreds of Italian and Portuguese workers in accommodation barges in Grimsby harbour, bussing them to and from the plant every day. They were explicit in their policy of not hiring any UK workers as contractors.

This was particularly offensive to local skilled workers against the background of Shaw’s having issued 90-day redundancy notices in mid-November, meaning that they would become redundant mid-February, whilst IREM was herding Italian workers like cattle on a boat (rumoured to be a prison ship), keeping them well away from trade-unionised UK workers.

The entire LOR workforce, from all subcontracting companies, met and voted unanimously to take immediate strike action. The following day over a thousand construction workers from LOR, Conoco and Easington sites descended outside Lindsey Oil Refinery’s gate to picket and protest. Thus began one of the most remarkable episodes of industrial action in the UK since the uprising in the North Sea in the late 1990’s.

Workers the length of the UK began a series of unofficial and therefore illegal actions from Grangemouth oil refinery and Longannet power station in Scotland, Sellafield and Heysham nuclear plants, Fiddlers Ferry in Widnes to the Drax power station in Yorkshire.

In just 3 or 4 days the UK’s anti-trade union laws, some of the most oppressive in Europe, were swept aside by workers in key industrial facilities; power generation and oil refining. Workers ignored and defied anti-union laws on balloting procedures, solidarity strikes and mass picketing, exploding the myth – perpetrated by far too many union leaders for decades – that the anti-union laws invented by the Tories and retained by New Labour are insurmountable.

The industrial action was not taking place in isolation. Across Europe workers have started to take action against the impact of the economic recession that threatens their jobs and wages and conditions.

For the left the strikes brought complications in the form of the slogan ‘British Jobs For British Workers’ which although was never raised officially by the Lindsey workers became prominent from the beginning of the dispute. Socialists have absolutely no truck with such slogans which promote division and can and have been used by the far right to promote their racist poison.

When Gordon Brown first used this phrase in November 2007 the SSP was unequivocal in condemning him for playing into the hands of the BNP and fuelling racism and xenophobia.

When the strikers used this slogan initially there is no doubt that there was a large element of throwing the slogan back in Gordon Brown’s face. Here was a situation in which UK workers were specifically being excluded from UK jobs. But the slogan very quickly backfired; it was a gift to the BNP who had in fact been using it for a number of years and it allowed the media to deliberately and dishonestly portray the strike as overtly xenophobic and racist.

An interview conducted by Paul Mason which was used on Newsnight showed a striker making the point that “we can’t work beside them, they are coming in full companies”, referring to the segregated accommodation of the new contractors. The BBC’s 10 o’clock news carried a story about the strike in which Government ministers accuse the strikers of xenophobia, the Newsnight clip is cut to the striker saying “we can’t work beside them”.

But the strikers themselves agreed demands at their mass meetings which never gained the oxygen of media coverage, but which cut across entirely the vicious distortions of their portrayal in the press. They demanded union rights for all workers, including immigrant labour; for union facilities for the Italian workers to make them an integral part of the trade union movement here; and for the implementation of the national construction and engineering industry agreement on the rate for the job, hours of work, breaks and conditions for all working in the UK – including the Italians.

Numerous first-hand accounts showed pickets giving short shrift to the unwelcome attentions of the fascist BNP – who after all sided with the Tories against the miners’ strike, and didn’t even think firefighters should have the right to strike. Strikers demonstrated a core internationalism and solidarity with fellow-workers that bodes well for the future of this movement.

Union spokespersons repeatedly stated that this strike was not about race or nationality, not against Italian or Portugese workers, but against the Italian company that was excluding local, skilled workers from even getting an interview for jobs. Strikers rightly saw this as an attempt by EU companies to exploit EU directives and court rulings on ‘posted workers’ to undermine and break hard-won national agreements and trade union organization.

Far from being instinctively against migrant workers from Italy or Portugal, many of the strikers are themselves ‘migrants’ – forced to uproot themselves to find work in other regions of the UK or even across the EU. So they will have felt particularly bitter towards Labour’s Lord Mandelson who in effect told them to “get on their bikes” and trek across Europe for work – because after all the EU regulations are for the workers’ benefit!!

Seumas Milne in The Guardian called it exactly right when he described the strike as “a fight for jobs in the middle of a deepening recession and a backlash against the deregulated, race-to-the-bottom neoliberal model backed by Brown for more than a decade which produced it.”

the strength and depth of the secondary, solidarity, action was immense.Linda Somerville

In the Glasgow Herald Professor Gregor Gall described the strike as essentially being about “the underlying issues of the race to the bottom under capitalism, the drive to neo-liberalism and the European Union’s deregulatory preference.” The specific European Union legislation and court rulings that were inevitably going to ignite labour disputes at some point is the EU Posted Workers Directive and the judgements by the European Court in cases including Viking, Laval and Ruffert. The judgements have had the effect of undermining union negotiated collective agreements which are not recognised as `universally applicable’ in the UK. For trade unionists this strike was waiting to happen and the response of workers across the UK has been inspirational.

Linda Somerville, formerly a member of the Unite National Executive, says that there were three things that stood out;

“Firstly that the strike took place in the first place” she says.

“We have been told repeatedly that workers in the UK are no longer interested in militant trade union action. That clearly is not the case.

“Secondly, the strength and depth of the secondary, solidarity, action was immense.

“Thirdly, the strikes were all against UK trade union law which is amongst the most oppressive in Europe. The legal tools were there for employers to launch a major assault on trade unions involved in the action but the sheer size of the strikes, protests and walk outs rendered the laws impotent.

“Workers at Grangemouth refinery who were very quick to come out in support of the strike have been emboldened by recently winning their pension dispute with INEOS which saw them take strike action in April 2008.”

For socialists and trade unionists this dispute has been an important test, with many more to come.

The SSP has repeatedly said that the economic recession and world wide crisis of capitalism will inevitably mean that workers will be pushed into struggle. But these struggles will be complex and contradictory with the enemies of the working class seeking to muddy the waters and cause confusion.

This example of militant trade unionism, in defiance of the laws, will inspire others to similar defences of their jobs and right to work – starting with others in the same industry.

For that reason it is vital that we take a sober and detailed analysis of the situation and in particular understand that in Europe it is the rabidly neo liberal and pro big business measures of the European Union that seeks to drive down wages and terms and conditions across the board that organized workers are now resisting.

We need to see the essence of the issues, even when accidental slogans cloud the image. Instead of ‘British Jobs for British Workers’ the SSP from the outset of this strike wave supported the strikers in demanding the right to work, the right to an equal chance of being employed, and for defence of the wages, conditions and union rights won by hard struggle in this harsh, dangerous industry.

The SSP from day one of this strike movement called on unions in the UK to urgently seek active links with unions in Italy, Portugal and the EU, to unite in action against attempts to divide and conquer, against the use of cheaper labour and worse conditions in the bosses’ race to the bottom. We also need to raise demands such as trade union registers of unemployed workers in the industry as the pool for employment when jobs are on offer – at least a small step forward to the days when unions had elements of control over hiring and firing in a few of the better-organised industries, such as printing. That would help counter the conscious ‘race to the bottom’ of conditions by companies at home and abroad, by use of cheap, disorganized workers to undermine the rights won by unionised workforces.

This dispute highlights the broader issue of ownership of the power and energy industry, where multi-nationals seize advantage of the de-regulated, cheap-labour EU market – championed by Blair and Brown – to maximize profits – and the SSP’s counter-proposal of public ownership and democratic control of the industry, where workers’ elected representatives would have a direct input to all aspects of employment, production and planning.

The wave of tremendously courageous strike action seems, at time of writing, to have won a major climb-down from IREM, with UK workers to get 50 per cent of the jobs, but with no lay-offs for the Italian workers, and for all to get the nationally agreed wages, hours and conditions.

This example of militant trade unionism, in defiance of the laws, will inspire others to similar defences of their jobs and right to work – starting with others in the same industry. The job of socialists and good trade unionists is to match the courage of these strikers and seek to influence the slogans and demands of their movement in a fashion that reduces confusion, limits the opportunities for the media and reactionaries to distort workers’ aims, and to consolidate the powerful elements of workers’ unity and internationalism already on show in this current powerful movement.