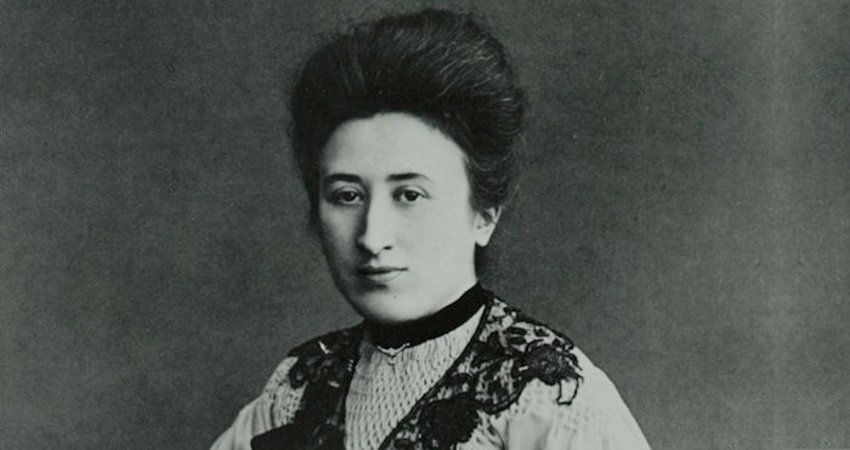 When you look back on old pictures – even family ones – you catch a glimpse of the past. It is how we live on – an instant of time and the circumstances captured briefly. A perception of the observer of who we are. I feel this about Rosa Luxemburg. Her piercing intelligence and lack of compromise which marked her political activity shine out brightly. Today, we remember her murder by members of the Freikorp, but her legacy lives on.

I was a young lefty Dundonian when I first learned about Rosa, a friend took me to see the movie about her life. I was fascinated a young talented woman with a disability. I had heard of Marx and Lenin but why not Rosa? I read all her books and pamphlets and I can say she changed my view of politics and why we do what we do. This still holds true today.

Why should the SSP remember her today? As one of our forebearers who agreed with our anti-war stance. As a member of the Spartacus League, she was critical of other parties who supported a war. This led to her death. She was political, truthful and used her intellectual arguments to be critical of war. She was also an Internationalist she wanted to create a mass movement and wake people up about their situation.

“Those who do not move, do not notice their chains” she said. She recognised the need for a mass movement before people can arise they have to recognise their condition and see their chains as being real. That is what we do in the Scottish Socialist Party and is part of our political education.

The name The Spartacus League which in Rosa’s time was about the impending war was adopted by people with disabilities to show what was happening with the entitlement cuts. Rosa had a life long condition as a result of polio as a child but I believe she would be out talking to people letting them know what is happening. This is so crucial to rattle the chains of oppression. Another quote which is important to me and sums her outlook out is.

“The most revolutionary thing one can do is proclaim loudly what is happening”.

I think too Rosa today would be working in our communities. She was critical of centralism and wanted to build a mass movement. She saw the political education of people as crucial to the revolution she wanted to wake people up which is surely the first step in revolutionary thinking. We proudly carry that legacy on today.

We remember her murder today at the hands of the Freikorp. Her body thrown into a canal. She came from an economically privileged background though seen oppression because of her Jewish background. Her family wealth could have made life easier some may say but she chose the path of speaking her mind. Spent much of her life in prison and was murdered. How many of us would do that for our beliefs? Some political parties use the word “Trot” as an insult well I’m a Luxemburgite and an Internationalist. The phrase is on many of our flags.

On the anniversary of her death look at the images of Rosa and think of why we are members of the SSP. She had a huge influence on me – there are few women remembered, especially women with a health condition. Rosa would want us to get into our communities and show them their chains. She would want us to speak out that affect ordinary people. Now we need her spirit more than ever. Look at the pictures of her smiling with friends her warmth and comradeship shines out. She awakened my political education and for that I will always be grateful and humble. Let’s remember her and the activists who speak the truth.

Always missed and an inspiration Rosa.