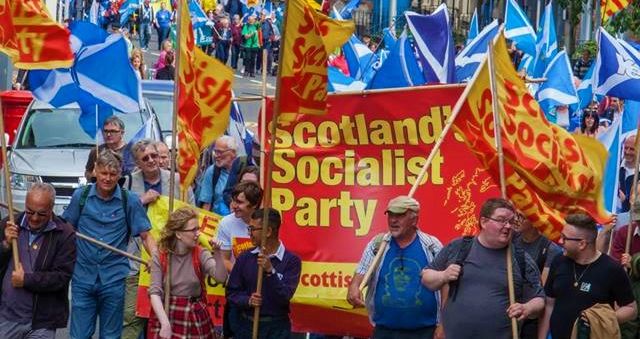 AS LABOUR ELECTS ITS FIRST KNIGHT OF THE REALM AS LEADER, THE SSP SAYS “FORGET SIR KEIR’S JOURNEY RIGHT – THE PLACE FOR SOCIALISTS IS IN A TRULY SOCIALIST PARTY“

The widely anticipated victory of  Sir Keir Starmer today as Labour’s new party leader not only puts the first ever Knight of the Realm at their head, it marks the end of the Corbyn era and the policies he advocated.

The victory earlier of hard right MSP and Trident cheerleader Jackie Baillie as Deputy Scottish Labour, in a poll of 50.2%, both underlines this trend and further spotlights the plight of current Scottish leader, Richard Leonard.

Starmer has made it clear he plans to move Labour to the right and to draw a veil over the five year adventure that was ‘Corbynmania’.

The timing of his move, which most Labour MPs and MSPs have long been yearning for, ironically comes as the need for state intervention to help millions of citizens – the centrepiece of Corbyn’s programme – is being implemented by Boris Johnson on an unprecedented scale to survive the Coronavirus emergency.

After ten years of austerity Johnson has discovered a ‘Birnam wood of money trees’, pledging hundreds of billions of pounds in state aid to support the economy, the cash strapped NHS, and has finally dumped the Thatcher mantra that ‘there is no such thing as society’.

These developments will have an impact on the public mood in Britain long after this crisis is over – and pose fundamentally new questions about the kind of society we want to live in, and how we might fashion it.

The Scottish Socialist Party has long supported such a reorganisation of our economy along socialist lines, placing vast natural, human and material resources at the service of the people and their needs in opposition to the planet trashing, profit driven world which has held sway in Scotland – with the support of all mainstream parties – for the last forty years.

To those disappointed by the defeat of Corbyn, and who wish to play no part of the Labour’s rightward move, I would remind them that there is a better alternative.

Socialists should be in a socialist party and here in Scotland that party is the Scottish Socialist Party. We are not led by Knights of the Realm or former Directors of Public Prosecutions, nor do we place our faith in the free market or British establishment.

We aim to return SSP MSP’s to Holyrood next year, however – and we would remind you that our record at Holyrood shows we advocated and advanced a wide range of reforms that benefited Scotland’s working class, including the abolition of NHS prescription charges (now a reality); extending free school meals; the abolition of warrant sales and poindings, and to make all public transport universally free. We continue to support workers’ and communities’ struggle against cuts imposed by all other parties, and for justice at work.

Our key campaigns today include a minimum wage of £12 an hour for all workers irrespective of age; public ownership of energy and railways; and make all public transport free to boost social inclusion, reduce car usage and thus help fight climate change. And we stand for an independent socialist Scotland, a modern democratic republic, thus rejecting a tartan ‘mini me’ version of today’s Scotland. I invite all those who refuse to be part of  “Sir Keir’s journey right” to join the SSP instead.