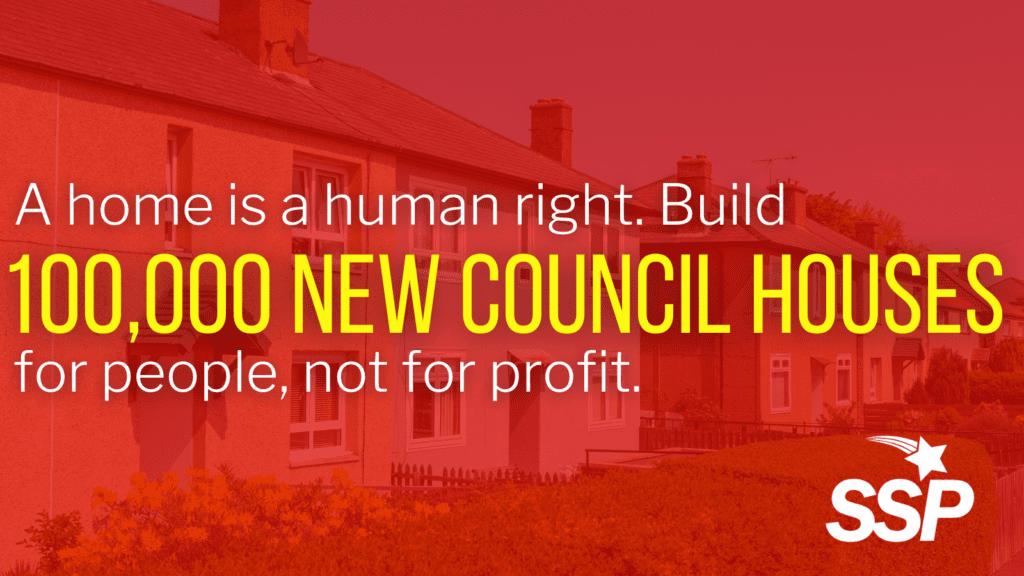 The Scottish Socialist Party demands the building of 100,000 new, environmentally friendly, council homes for social rent, and for restoring an adequate surplus of safe, suitable, and affordable social housing in all regions.

In 1999, the mean house price in Scotland was around £71,000. Now, it has rocketed to around £200,000 – eight times the average annual income. As a result of out-of-control cost inflation and dwindling supply, the number of owner-occupiers in Scotland under 34 has plummeted from over half in 1999 to just one-third.

In September 2019, 11,432 households were living in temporary accommodation – including 7,252 children. The average time spent in “temporary” accommodation is six months.

This is a housing crisis, and under SNP, Green, Labour, Liberal, and Tory administrations, Holyrood and Local Authorities have been dithering on housing action for too long.

There is a crisis of available homes in Scotland because the public housing stock has been depleted through privatisation. At current rates, it will take 20 years to clear the existing waiting list for housing.

The 2019 Housing Conditions and Standards Report revealed that 68% of Scottish homes suffer from disrepair and, shockingly, half of Scotland’s dwellings have disrepair to critical elements – including roof coverings, windows, and exterior doors.

This has led to a housing crisis of dampness and fuel poverty in Scotland.

Housing quality, and appropriate housing, connects directly to public health and wellbeing. 11% of households are affected by damp, and in the middle of a pandemic 53,000 households are overcrowded.

The SSP calls for an emergency programme to retrofit existing homes and public buildings – without cost to tenants.

Over 100,000 jobs can be created in a 20-year plan to decarbonise and retrofit every home in Scotland.

Authorities must compile and maintain a thorough register of property owners in Scotland and bring rented private sector homes identified as being “below tolerable standard” into the public sector. Bring long-term empty or dilapidated homes into public ownership and restore them for social rent.

A Home is a Human Right

The Scottish Socialist Party believes that a home is a human right – not an opportunity to profit.

Multiple and for-profit homeownership strips away residential housing options and raises prices – destroying communities. The need is clear: no more seconds until everybody is homed.

Local authorities will be given additional powers to prevent the purchase of holiday homes in regions where there is a housing crisis, as well as the power to levy additional taxes on secondary properties.

56% of homeless applicants for housing cite abuse, relationship breakdowns, or being ejected from their home as the reason for their application. A surplus of safe, suitable, quickly accessible social accommodation is needed in all regions.

Rent is rocketing across Scotland, but incomes are stagnant – or falling. But the SNP/Green coalition government has pushed rent controls back to 2025 – breaking their promise to Scotland’s tenants, leaving plenty of time for rents to climb and climb, and to water-down plans in favour of landlords.

We’ve had enough broken promises. We need to cut and cap rent at affordable levels through emergency intervention in the housing crisis – and we need rent controls NOW.

The SSP will cap private rent at an affordable percentage of income.

The SSP will implement a graduated rent discount set at the same level as the support that would have been available for tenants to buy their council homes under “Right to Buy”. After 25 years, tenants would pay zero rent until their tenancy is terminated or transferred to another member of the family.

We must extend Secure Tenancy protections to private tenants and pass stronger legislation that protects tenants from eviction. Ensure additional protections for vulnerable and low-income households.

People are pushed into homelessness because the private landlord decides to sell a property. Tenants must have the automatic right to remain in their home, and not have it sold out from under them by landlords.

To avert an evictions catastrophe and lift both people and the economy out of unsustainable debt, local authority housing debt should be cancelled with no strings attached.