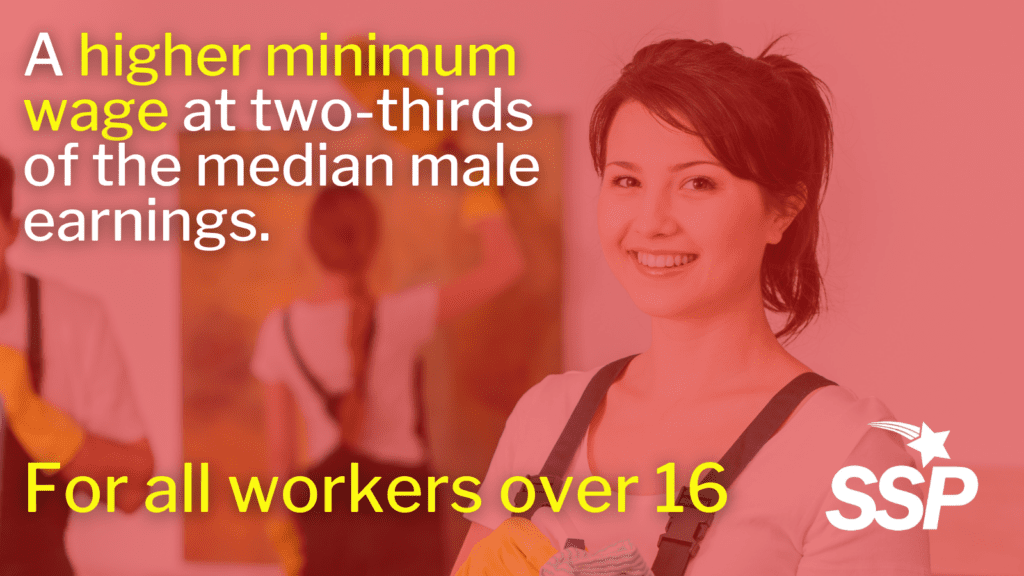 Most people in Scotland who are in poverty are in employed households on minimum wage incomes.

Despite soaring living costs, wages have remained static – especially for those on low-wage incomes and in the most precarious jobs. Workers on low-wage incomes simply cannot afford to save for a rainy day when every penny that comes in must go straight out again.

Millions of workers are living in precarious, hand-to-mouth conditions with little to no savings. Even before the pandemic, 38% of people in Scotland had savings below £2,500 – 21% had no savings at all. The result is poverty, debt, misery, and economic decline.

As living costs run out of control and jobs come under threat, it is set to get worse.

A Minimum Wage We Can Live On

The SSP campaigns for a statutory minimum wage set at two-thirds of the male median earnings, rising with inflation.

In April 2022, the UK’s minimum wage band rates will increase by an average of just 48p. But the cost of living in the UK is skyrocketing. This means that millions of workers are facing a real-terms pay cut, leaving them unable to afford transport, food, and essential utilities.

Instead, we need to raise wages to a level that workers can live on – and keep it scaled to reflect future changes in the cost of living.

The SSP supports a public audit of small and medium enterprises to determine which can afford the new minimum rate without state assistance, with assistance offered to those genuinely in need.

We fully support Trade Unions and workers fighting for an immediate £15 per hour pay in their sectors.

The SSP supports an equal minimum wage rate for all workers over 16.

Under the current wage rules, younger workers and apprentices can be paid around half of that of workers over the age of 23 – less pay for the same work.

From April 2022, under 18s and apprentices are entitled to a rate of just £4.81 an hour. That’s often not even enough to pay for the bus.

Age bands are legalised discrimination that exploits younger workers with the least amount of bargaining power – and which drives down everyone’s wages, as employers are incentivized to exploit younger workers and discard older ones.

A new minimum wage for Scotland must set a single base rate of pay for all workers over 16.