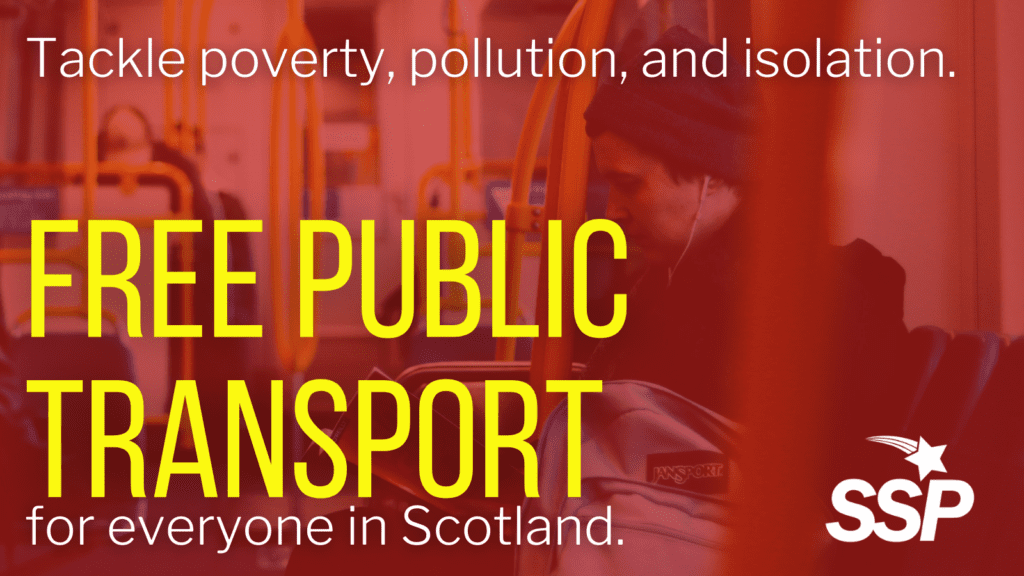 We face catastrophic climate crises, rampant poverty, and growing inequality. We all rely on public transport in some form. That means we need a free public transport system fit for the 21st century.

Road traffic accounts for 73% of air pollution – cars alone for 45% of it. We need free public transport to fight poverty and pollution together.

Privatisation and deregulation of public transport services have resulted in soaring fares, job losses, and cuts to essential services in local communities around the country. Public transport should be a public service, not a money-making machine for a handful of millionaire capitalist owners who make a packet out of the privatisation racket.

We want to make different branches of public transport cooperative, not competitive. Deliver a connected system that improves access, with a single ticket, multi-service system linking Scotland together, and incentivise more public transport use through free public transport, routes that fit community needs, and accessible services.

We can and must build a public transport is a service democratically accountable to the communities it serves, with democratic, elected boards of management involving workers, communities, passengers, and representatives of local and national government.

Free public transport fights poverty and pollution together by reducing car dependency and improving accessibility for everyone. Free public transport and expanded service provision bring communities together and tackle loneliness and isolation. It also brings improved access to job opportunities, public services, retail, sports, hospitality, and leisure – returning on the public investment by boosting our economy right when it needs it most.

Free public transport is already an established principle, with fare-free travel already on offer to many people. This is a small-scale version of what the SSP has argued for over 20 years. We need to expand free public transport to include everyone. This has already been done in cities across Europe.

The STUC’s “Green Jobs in Scotland” research has found that 60,000 jobs could be created in Scotland by upgrading and operating public transport – including 33,845 jobs in the first two years through an investment of £3.9 billion.

In comparison, the UK’s failed Test and Trace system cost £37 billion in its first year.

Scandals like job losses at Alexander Dennis must never be allowed to happen again. Instead, as part of a Socialist Green New Deal, manufacturing sites and shipyards can be taken into public ownership, creating jobs and rebuilding our essential manufacturing base.