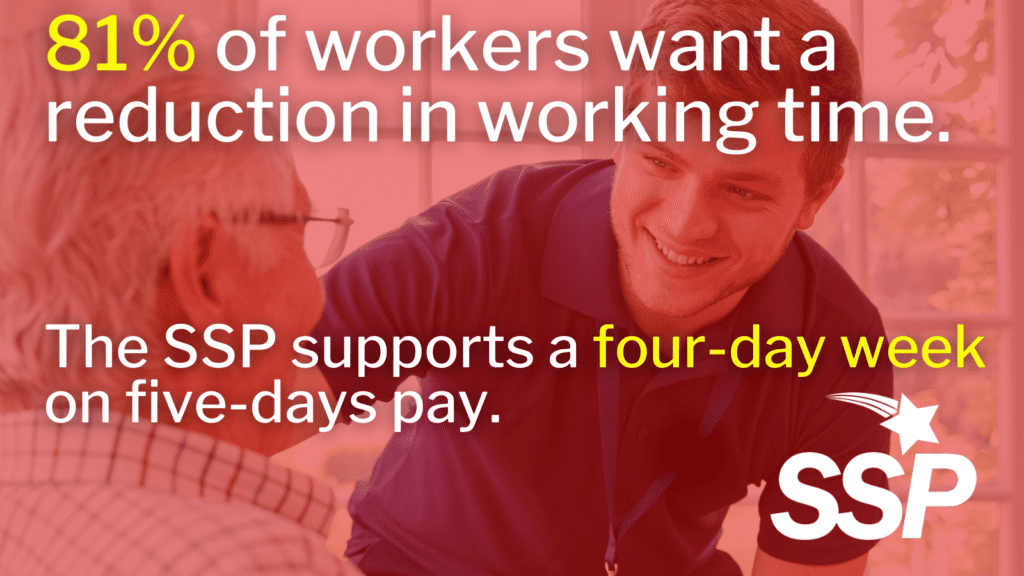 Crises of Underemployment and Overwork

The UK has a dual crisis of underemployment and overwork. Full-time workers in the UK work the longest hours in the whole of Europe, at an average of 42.3 hours a week – 2 hours more than the EU average, and 4.5 hours more than in Denmark.

Exhaustion, stress, and burnout are the increasingly common hallmarks of working life. Medical studies have linked overwork with heart disease, diabetes, stress, depression, and a five-fold increase in the risk of strokes.

At the same time, 3.8 million workers in the UK cannot get enough hours due to insecure and short-hour contracts.

81% of workers want a reduction in working time. In July 2020 63% of respondents told Survation that they want the government to explore a four-day working week.

The SSP is a long-time pioneer in the campaign for a four-day week on five days pay – a 35-hour maximum working week without loss of earnings.

Fighting for a shorter working week without a loss of pay is a constant theme in working-class history. It’s as urgent a demand today as it was 100 years ago.

An immediate maximum working week of 35 hours – without loss of pay – would itself free up millions of new jobs as the crisis of overwork ends. It would be good for workers’ physical and mental health, reduce accidents at work, reduce sickness and absenteeism, and – as has been definitively proven – it would boost productivity.

A Four-Day Week would enhance the quality of workers’ lives, facilitate improved care and childcare, reduce the damage to workers’ wallets by slashing commuting times, and restore proper rest and leisure time.