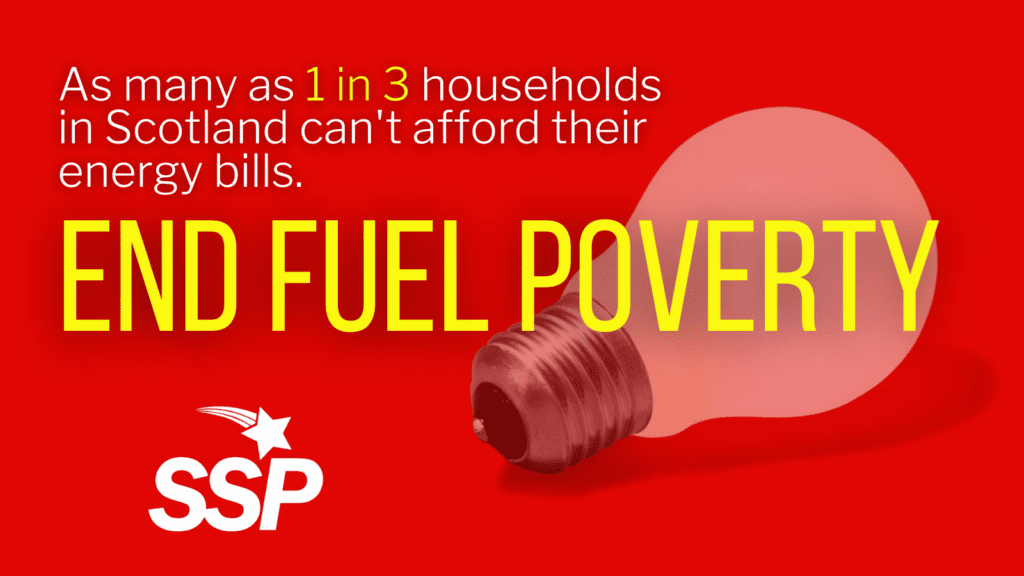 No one should have to choose between a warm meal and a warm home – but people can’t afford to eat and heat their homes. We have to fight fuel poverty.

Inflation is at its worst in 30 years. Household energy bills go through the roof. One in every three Scottish households are already in fuel poverty.

The giant energy companies who are ripping us off enjoy grotesque and rising profit levels. The Big Polluters – like Shell and BP – are trashing the planet for profit, with 71% of all pollution caused by just 100 companies worldwide. They are chucking North Sea Oil and Gas workers on the scrapheap.

The Scottish government has broken its promise to end fuel poverty. The SNP/Green coalition government has abandoned electoral promises of a National Energy Company.

In 2017, Nicola Sturgeon promised Scotland that a National Energy Company would be established by 2021, with “no shareholders to worry about, no corporate bonuses to consider”.

Sturgeon promised those on lower incomes “the option of a supplier whose only job is to secure the lowest price for consumers”.

Instead, the SNP/Green coalition government has celebrated handing over North Sea renewable potential to multinational polluters just months after COP26 was held in Glasgow – a “Green” party that supports the polluters, and a “National” party that has abandoned democratic and independent control of Scotland’s energy.

Energy is a vital public resource, and no society can flourish without control of its energy. It must be used for the collective good, not for private profit. The SSP is fighting for democratic public ownership of all forms of energy, including renewables, to end grotesque profiteering in energy.

The SSP is campaigning for both 100,000 new council homes across Scotland, and for public funding to retrofit every home and public building in Scotland – including free insulation, fast broadband, and solar panels – with renewable district heating systems to fight fuel poverty and cut greenhouse emissions.

The SSP supports a worker-led Just Transition to clean, green, renewable energy – to create at least three skilled, well-paid, fully unionised jobs for every job lost in oil and gas.