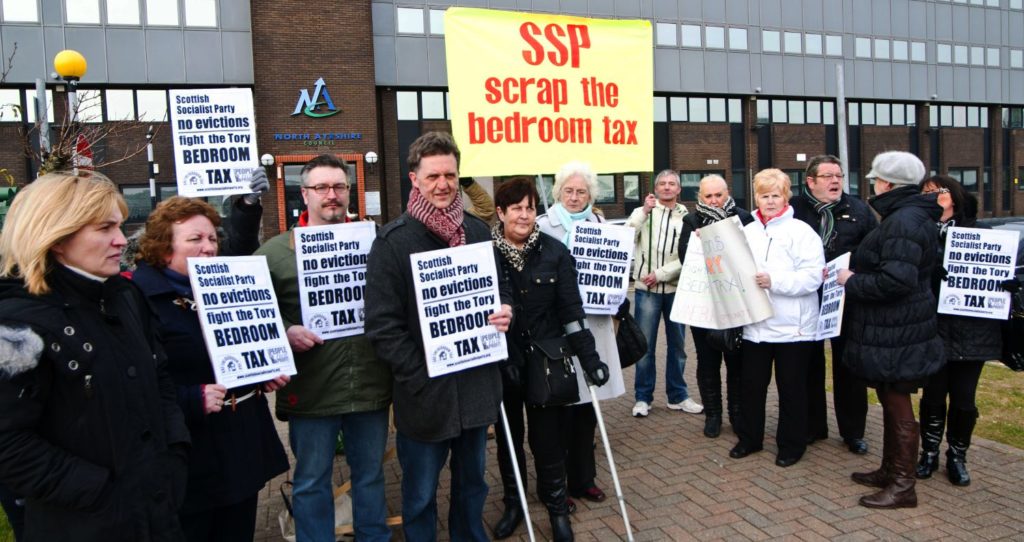 “I moved from a two bedroom house to a three, because as well as my 3-year-old I have three stepsons who live with us a few days a week.

“The council said I qualified for that size of house, but now months later I am being hammered by the Bedroom Tax, because my husband doesn’t get any of the child benefits for his sons.

“On top of that my husband is ill. He had a heart attack at work, was declared fit after three months, went back to work and had another attack.

“We need an extra bedroom for me to sleep because he suffers COPD and it’s impossible to sleep in the same room. But they make no allowance for that, and expect us to pay £50 a month Bedroom Tax, wherever the hell we are meant to find that kind of money.”

So said one Ayrshire woman at the latest in our series of SSP public meetings. And that’s but one example of a litany of crimes against decent people by the millionaire gangsters who devised and imposed the Bedroom Tax.

Alex has just joined the SSP after getting active against being robbed of £10 a week from his £71 benefits, and being told he doesn’t really need a bedroom for his 10 year old daughter and 3-year-old son when they stay with him a few times a week.

But he has uncovered an even more cruel case through his campaigning efforts: a woman whose grandchild died aged three months, whose ashes are buried beside a memorial apple tree in her little garden. Now she is being bullied into moving home, leaving these precious remains behind, because of the Tory Tax.

The savagery of this theft of £500 million a year from the poorest sections of society – nearly 8 out of 10 of them having a disabled family member in the house – is beyond words.

Now the Tax has bitten, the time for action has arrived. A multitude of local public meetings have drawn huge crowds in the past two months or so, forming networks to defy and defeat the Bedroom Tax.

The SSP has been at the heart of this, as have UNITE Community branches, and in particular the umbrella campaign No2BedroomTax.

People getting letters of decision on benefit cuts from the Council Housing Benefit departments should make sure they get advice from these networks on how to appeal, within the one-month deadline.

Numerous legal challenges have been lodged in the Courts, and if any of these win, tenants who have appealed on similar grounds could stand to gain – provided they put their appeals in writing, on time.

The grounds for appeal can range from the needs of a disabled person under Human Rights laws, to parental duties towards their children under Children’s Acts, to challenging the use of the room defined by the landlord as a bedroom. Model letters are available through the campaign.

Mass appeals also help to clog up the system, one strand to making this vicious tax unworkable.
But collective action is also critical. The SSP has led several lobbies of Councils and local housing associations demanding a policy of No Evictions. This has had a very important impact. The pledge by SNP councils – and the Edinburgh Labour/SNP/Green coalition – to have no evictions this year arising from the Bedroom Tax are the result of campaigning.

We need to pound Labour and other Councils to follow suit – and likewise local housing associations . Already this has resulted in some of them promising ‘no evictions’. But the SSP thinks the councils need to go at least two steps further.

Firstly, alongside declaring there’ll be no evictions for this tax, they should mount a campaign demanding the shortfall in rent off the Scottish government. Otherwise, they will be hounding tenants for rent money they simply do not have, with the potential threat of taking pre-eviction action against them followed by eviction orders, if the council authorities deem that they ‘have not taken all reasonable steps to avoid rent arrears’.

And an even more powerful weapon in the hands and within the powers of local councils is to follow the Knowsley route: re-designate their housing stock, redefining the purpose of rooms so as to avoid them being liable for the Tax as ‘spare bedrooms’.

Campaigners need to pile on the pressure for councils and housing associations to take these steps – in tandem with the demand that the Scottish government fund social landlords for the guesstimated loss of £53million this year due to tenants being financially incapable of paying the Bedroom Tax.

Of course some, including SNP leaders, protest that this would deprive other hard-pressed services of funds at a time of austerity. True, but that merely highlights the need to pound the Scottish government with demands to defy the broader cuts package dictated by Westminster, mobilizing communities and workforces in a mass movement demanding back the stolen billions off Westminster.

Not only would that tie in with the recent STUC decision to support a one-day general strike against the Tory cuts; it would also strengthen the case for outright independence, for a Scottish government to abolish the Bedroom Tax.

Unity is our strength. Unity within and between communities. Unity between those directly hit by the Tax and those opposed to it on principle. Unity between tenants left on starvation incomes and workers in councils and housing associations who are already facing pay cuts – in at least one case, pay cuts of up to £5,000 a year – redundancies and reduced services.

An immediate opportunity for such a display of unity will be May Day marches, and especially the Bedroom Tax day of protest organised by the No2BedroomTax campaign, in Glasgow on Saturday 18 May. We need to make that a mass mobilisation.

The movement that has erupted against the most vicious attacks on the working class since the Thatcher Dark Ages is also an expression of deeper resentment at a that rips off the majority for the profits and obscene privileges of the millionaire minority.

And people are awakening to the fact there is absolutely no excuse for benefit cuts. We live in a wealthy nation, but one where the richest individuals and capitalist companies systematically dodge £120 billion in taxes every year – 240 times as much as the Tories are robbing off people through the Bedroom Tax.

Instead of evicting tenants we need to evict the Tories; tax the rich instead of the poorest, and boost the incomes of the majority as well as create jobs by building decent, affordable social sector housing for all needs. We need a socialist alternative to a rotten system that spawns the likes of the Bedroom Tax – which the SSP is determined to fight for.