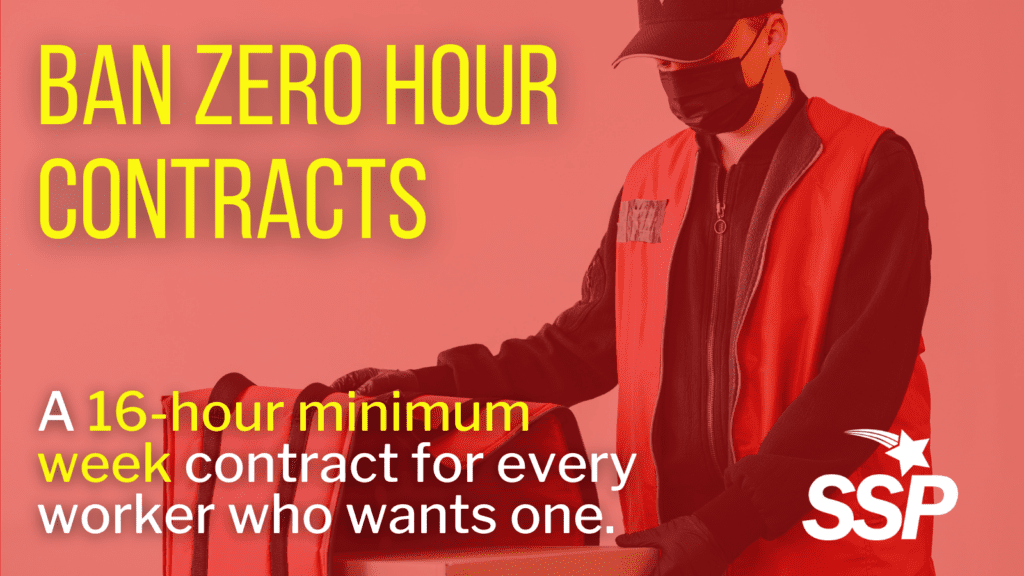 Most people in Scotland who are in poverty are in employed households.

Despite soaring living costs, wages have remained static – especially for those on low-wage incomes and in the most precarious jobs. Workers on low-wage incomes simply cannot afford to save for a rainy day when every penny that comes in must go straight out again.

Millions of workers are living in precarious, hand-to-mouth conditions with little to no savings. Even before the pandemic, 38% of people in Scotland had savings below £2,500 – 21% had no savings at all. The result is poverty, debt, misery, and economic decline.

As living costs run out of control and jobs come under threat, it is set to get worse.

81,000 workers in Scotland are employed on zero hours contracts.

Contracts of this sort require workers to be on-call, unpaid, ready to work at a moment’s notice, but without minimum or maximum hour guarantees. Workers who decline hours are frequently punished with reduced offers of work – and half of all workers on zero hours can be sacked without statutory processes.

Not everyone wants or can hold a full-time job. Flexibility is an increasingly important part of working life, with more time for care duties, travel, and a healthier work/life balance.

But, right now, all the power to dictate our hours and our lives rests with employers. The balance of power in the workplace and labour market needs to be tipped in favour of the workers.

The SSP is fighting to end zero hours contracts, and will instead guarantee contracts with a 16-hour minimum working week for every worker who wants one.

Companies will be obligated to offer workers at least a 16-hour week minimum contract.

That includes an opt-out clause for individual workers who require fewer than 16 hours – to be negotiated with Trade Union representation for every affected worker.

This will give genuine flexibility to workers who cannot take on full-time employment, but who need and deserve stability and certainty.