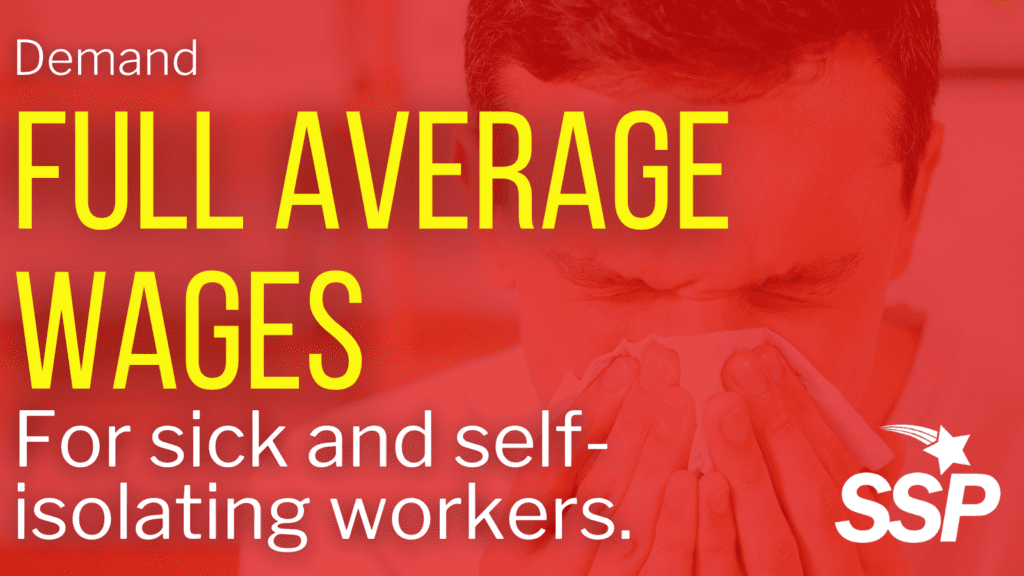 More than two years into the pandemic, the UK still has one of the lowest levels of sick pay in all of Europe.

In the UK, workers are entitled to just £96.35 per week in Statutory Sick Pay – and not every worker, at that. The European average is £245 per week. In real terms, sick workers are given pay cuts that they cannot afford.

The UK’s inadequate system of sick pay, and opportunistic attacks on sick pay by employers, have put the lowest earners, their families, and other workers in the COVID-19 firing line. Low-paid workplaces such as food production plants, garment factories, call centres, and care homes have become ground zero for new COVID outbreaks.

Workers are left to choose between their income and their health, including during COVID-19 outbreaks.

Nobody should ever have to make that choice. We have to make sure that everyone can afford to look after their health and help protect the health of others.

That’s why the SSP demands full average wages for sick and self-isolating workers.

This means that no one has to drag themselves into work when sick out of financial hardship – protecting their health, and the health of everyone around them.

The SSP reiterates its condemnation of major employers who have victimised and sacked prominent Trade Unionists for demanding full average wages for sick and self-isolating workers.

Only 38% of workers in Britain believe that their employer carried out a COVID-secure risk assessment. Only 42% were given PPE.

Workplace hazards could be removed and prevented by elected workers’ representatives, whose everyday experiences put them far more in tune with workplace risks than the depleted, downgraded Health and Safety Executive Inspectors – whose numbers have been halved by budget cuts.

A system run for private profit will always cast workers’ health to the back of the queue. Instead, we must put workers’ lives and health before profit.