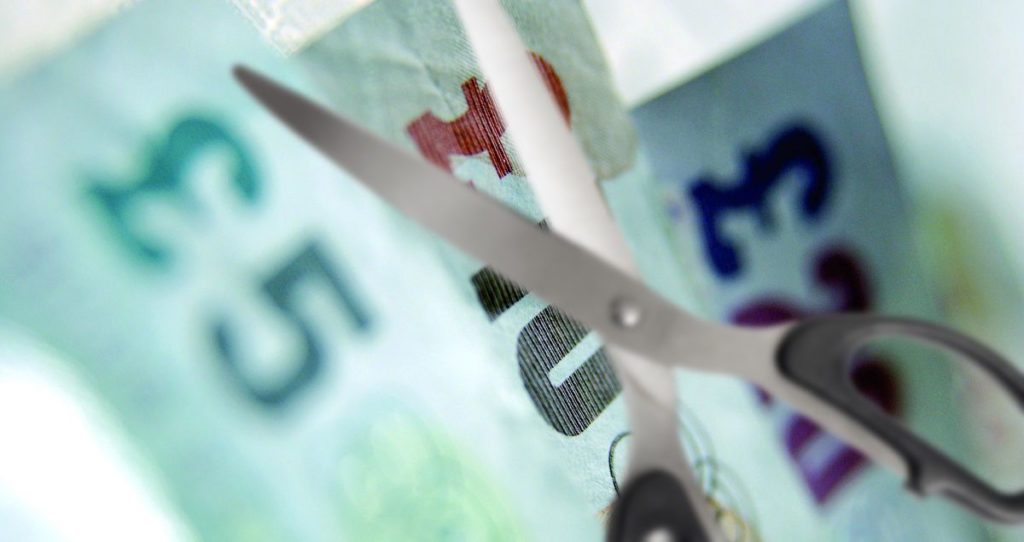 The councillors of Scotland are poised to vote YES to another bout of municipal butchery. Council budgets are about to be set across the country, for the next 1-3 years. The common thread in all 32 council areas is cuts: cuts to jobs, cuts to vital services, cuts to the conditions of the workforce.

Tens of millions of pounds are being slashed off local public spending – despite us all being told there’s an economic recovery.

A litany of slash-and-burn crimes
Glasgow City Council – Labour controlled – are hacking another £100m off services and jobs over 3 years, on top of their previous cut of £175m since 2010. Vulnerable people, like those supported by Glasgow Association of Mental Health, are at the sharp end, as GAMH’s budget is reduced by 40 per cent.

Edinburgh City Council – run by Labour and SNP – boast of “greater efficiency” and “improved customer services” as they lop £67m off spending and plan 1,200 job losses! You couldn’t make it up; well, this coalition of cuts councillors have!

North Ayrshire – SNP the ruling party – threatens another £19m over 3 years, hitting education and social services hard. The Labour opposition condemn this in Press Releases, but turn up to budget meetings and vote for the cuts!

West Dunbartonshire – a Labour council – wants to add another £17m to previous cuts in one of Scotland’s most deprived boroughs, with school closures and an end to funding for lifeline services through two local Women’s Aid Centres amongst the victims.

Dundee – SNP-run – aims to slice £8.5m off services, with school closures thrown into the mix.

North Lanarkshire – one of Labour’s last bastions – threatens 1,400 job losses, with £62m in cuts this year, about £73m in the next two years.

TINA: “there is no alternative”
The list goes on; a dreary litany of slash-and-burn by councillors of all the mainstream political parties – Tory, Lib Dem, Labour, even the SNP.

And they all sing the same background tune to their axe-swinging crusade: “we have a duty to balance the books”, and their all-time favourite, “there is no alternative”. The latter was also a favourite tune of the late, unlamented Margaret Thatcher as she put the boot into the working class in the 1980s; she even had her own acronym: TINA, ‘there is no alternative’.

It seems it never occurs to these services-cutting, jobs-slashing councillors that they should say NO to all cuts, defying the cuts handed down from the Tory dictatorship of and for the rich at Westminster, mounting a campaign to win back some of the billions stolen off Scottish budgets and therefore Scottish councils over the years.

In the last 3 years alone, £3bn has been robbed off Scotland’s budgets by the Westminster razor gang. As Unison reported last year, 39,300 council jobs have vanished since 2010, one of the human consequences of ‘balancing the books’.

And this new round of slaughter to services will hit some of the people most in need of the social support a modern society should guarantee. For instance, 25,000 women in Scotland made their first contact with Women’s Aid Centres last year, in desperate need of refuge for them and their children, as they flee domestic abuse. But in at least West Dunbartonshire, North Lanarkshire, North Ayrshire and Fife councils – a mixture of Labour and SNP administrations – funding for these lifeline refuges are being either slashed or entirely stopped – to ‘balance the books’.

Putting the CON into CONsultation
The new modern method of implementing such cowardly butchery is to hold bogus ‘public consultation’ exercises. Councils have spent considerable sums in this charade, this pretence of giving ‘choices’ to the public.

As well as online voting, they hold public forums, sometimes with hi-tech electronic voting devices, where the elected councillors hide whilst unelected council officials carry the can, putting forward a long-list of cuts, asking people which cuts to carry out.

The councillors then issue glowing Press Releases about “the biggest consultation in the council’s history”, and effectively pass the blame for their own spineless acceptance of Westminster-inspired cuts to the average Joe or Josephine.

As I said in the recent live Radio Inverclyde debate with the Labour council leader Stephen McCabe, that’s like offering somebody the choice of being executed by a firing squad or the hangman – but with no offer of staying alive!

These Labour (and SNP) councils have truly put the con into CONsultation!

People’s Budgets
Instead of offering false ‘choices’ between cutting local schools or community facilities, teachers’ jobs or street cleaning, larger school classes or cuts to women’s refuges, elected councillors should be initiating genuine forums where People’s Budgets could be debated, based on local needs and priorities, but underpinned by an expansion of funding from central government, rather than annual cuts.

Even at this eleventh hour in setting budgets, if Labour and SNP councillors discovered a collective spine they could as a minimum set No Cuts budgets; Defiance budgets which refuse to pass on the cuts issued by Westminster and meekly passed down by the Scottish government. Budgets with not a penny reduction in services, not a single job lost.

No Cuts Defiance Budgets
“But the money would run out if we did that” was the cry of Labour’s Inverclyde council leader when we debated this option. Only if the councillors sat on their hands and did nothing!

If they were genuine about standing up for the people they got elected by, Labour and SNP councillors should link up with the council workforces – which constitutes a massive 246,000 workers in Scotland – through their trade unions, alongside user groups, tenants’ groups and political parties dedicated to fighting the cuts, and mount a massive campaign to win back the £millions required to ‘balance the books’ without a single penny in cuts.

If the SNP Holyrood government was serious about standing up for Scotland, they would go beyond ritual condemnation of Westminster’s cuts and mount a campaign of mass defiance, refusing to pass on a single penny of the Tory-LibDem Coalition’s austerity, appealing to a population awoken by the recent Referendum to take to the streets demanding “Give us back our stolen billions – bail out jobs and services, not bankers and the rich”.

Scrap the Council Tax: tax the rich
And meantime, as a matter of urgency, the trade unions, community organisations, councillors and political parties should thrash out a progressive alternative means of funding councils.

Funds from the Scottish government account for about 80 per cent of all council budgets. The rest mostly comes from the Council Tax. But this is a brutally regressive tax system, where those on lower incomes pay disproportionately far more for local services than the richest do.

The SNP government has insisted on a freeze on Council Tax bills for several years. Families struggling to cope with household bills welcome this – although the richest gain most from the freeze. Labour’s response is to demand an end to the Council Tax freeze – apparently so out of touch with working class lives that they’re oblivious to the pain of increased bills their option would mean.

Another false choice: added financial pressure to cut jobs and services through the SNP freeze, or an Ice Age of further cuts to disposable incomes through Labour’s increased Council Tax bills. 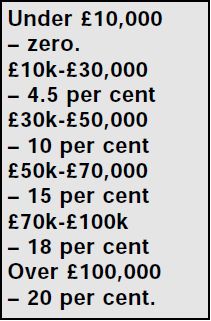 The SSP has pioneered and campaigned for the outright abolition of the regressive, unfair Council Tax since our founding aims were written in September 1998. We want it replaced by a progressive Scottish Service Tax, based on income, on the ability to pay. An income-based tax with rising bands and rates, making the rich pay their fair share.

The last time we costed this alternative – four years ago – it would have meant 80 per cent of people paying less, the rich minority paying a damned sight more, and the income for local jobs and services almost exactly doubling: £3.5bn a year from the Scottish Service Tax, compared to £1.8bn that year from the Council Tax.

Public need, not private greed
Contrary to the ‘TINA’ brigade of councillors, there clearly IS an alternative. But it takes a bit of courage, a spirit of defiance, a readiness to give a lead to people in opposition to ongoing assaults originating in Westminster.

The SSP proudly stands on the side of working class communities and council workers against this butchery, ready to join them in a campaign of defiance of all cuts, and with a fully-costed, progressive alternative means of funding an expansion of council jobs and services. Surely we can defy and defeat the tin-pot Tory dictatorship of capital around Cameron, win back funding for jobs and services, and start to build a Scotland based on public need, not private greed?