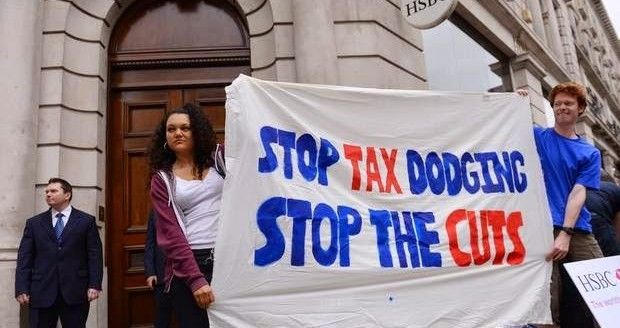 There’s a gut-wrenching stink of corruption arising from the body of capitalism right now.

The world’s second-biggest bank, HSBC, has hit the headlines for providing a tax-dodging service to some of the world’s biggest corporations, richest capitalists, and most corrupt crooks.

The public, and public services, have been deprived of £billions in unpaid taxes, in a conscious campaign of swindling on an industrial scale, thereby adding to the savage cuts to wages, benefits, services and the lives of millions. However, HSBC is but one link in the chain of corruption and graft known as capitalism, the system where those in power think all is fair in looting and profiteering.

Back in 2007, whistleblower Herve Falciani leaked acres of documents showing how around 130,000 of the globe’s wealthiest people, in 203 different countries, were systematically shown how to dodge taxes by the Swiss arm of HSBC.
In France, Argentina, Belgium and the USA these revelations have led to criminal investigations, such is the clamour for action against the bankers and capitalists who brought the world economy to the brink of ruin in the 2008 financial crisis. But in Britain, the self-proclaimed mother of democracy, where HSBC is actually based, a monumental cover-up of criminal tax-dodging has been conducted. Not only the perpetrators at the tops of the banks, but also the heads of HMRC and the Westminster government have been up to their elbows in burying the facts from public view up until now, not even ‘naming and shaming’ the con-merchants involved, let alone prosecuting them.

HMRC was handed the leaked documents in 2010, if not earlier. These revealed 7,000 UK citizens who had systematically evaded taxes with the active advice and involvement of HSBC’s Swiss operation. Five years on, all the authorities have done is a series of shady out-of-court deals – this week boasting(!!) they have recovered £135m in taxes, interest charges and fines – with a sum total of ONE unnamed individual prosecuted.

Contrast that with the shameless, relentless prosecution – and indeed persecution – of those who falsely claim a few hundred pounds in benefits; it says it all about the class-ridden society we live in.

One stark statistic captures the values of capitalist government in the UK: HMRC employs a mere 300 staff pursuing tax evasion by the fabulously rich and big corporations, whilst they have 3,250 staff in pursuit of benefit fraud, even though the latter only amounts to less than 1% of the money lost to the state by corporate and fat cat tax fraud!

One of the chief means of dodging taxation is through offshore tax havens. As the BBC blithely states, “tax avoidance is perfectly legal, deliberately hiding money to evade tax is not”. But that’s precisely what HSBC has helped its rich clients do. Just a glimpse at a few of their methods should make your blood boil, and add steel to your determination to help dismantle the whole rotten edifice of capitalism. 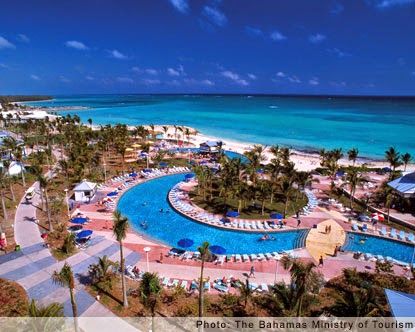 They help advise rich clients on how to stay ahead of the law, such as how to dodge the impact of the European Savings Directive of 2005.

They supply wealthy clients with a foreign credit card so they can withdraw their undeclared cash at cashpoints abroad. For instance, Richard Caring, British tycoon and owner of the celebrity-packed Ivy restaraunt in London, on one day in 2005 thus removed £2.25million in cash in Switzerland – dodging his tax duties in the UK.

In Geneva, HSBC handed out ‘bricks’ of $100,000 a time, no questions asked, to American surgeon Andrew Silva, so he could then illegally post the cash back to the USA.

Amongst their other clients was Emmanuel Shallop, later convicted of dealing in African ‘blood diamonds’ – the blood-soaked, illegal trade that has claimed thousands of lives through wars on the continent. They opened up an account for him in Dubai.

Hollywood stars, royalty and heirs to some of Europe’s biggest fortunes are on the HSBC list of criminal tax-dodgers. And only one of the 7,000 British citizens implicated in holding an estimated $21.7billion in HSBC’s Swiss vaults has been prosecuted!

But don’t be fooled by the huffing and puffing of David Cameron about clamping down on those embroiled in tax evasion through offshore accounts.

For the past five years, the rich have bought the silence of the government on this scandal. When 500 mind-bogglingly rich donors to the Tory party gathered in London’s Grosvenor House hotel this week at the annual ‘Black and White Ball’, forking out £15,000 a head for dinner to raise Tory party election funds, it was money well spent. They were there to buy the next government!

At last year’s event, the 570 assembled worthies were ‘worth’ a combined £22billion in personal wealth. This year’s crowd of parasites are likely to be in possession of even more; after all, Cameron and Osborne cut the top personal tax rate on incomes over £150,000 by 5% since April 2013.

More significant still, they’ve kept quiet about the tax swindling of these leeches on society, since the HSBC revelations in 2007. And the plot thickens.

Stephen Green was chief executive of HSBC from 2003-2006, then chairman from 2006-2010. He wrote books on “reconciling God and Mammon”, in his mission as an evangelical Christian who portrayed himself as a saint in sinful times.

He was then made a Tory Lord. Cameron begged and cajoled the saintly Lord to become a government Minister during a trade mission to India in July 2010 – a clear 3 months after Cameron’s government had received the leaked documents on the very ‘sinful’ deeds of Green’s HSBC. Lord Green was appointed Minister for Trade and Investment, from January 2011 until December 2013. “To him that hath, more shall be given, tax-free!”.

Cameron’s stinking hypocrisy on offshore tax-dodgers doesn’t stop outside the walls of the HSBC banking conglomerate. His wife Samantha enjoys a £100,000 salary as creative consultant to luxury leather and stationery firm, Smythson’s. They’re the company that advertise what every working class woman needs: python skin clutch bags at £850 a go, and crocodile skin clutch bags at a cool £3,200 each. It makes you puke; it would take nearly 6 months for a woman working 20 hours a week on the national minimum wage to earn what some creatures pay for a glorified purse.

Smythson’s UK parent company had a £29.9million turnover in 2013/14, helped out by a taxpayer-funded £1.6m National Loan Guarantee, a scheme the Tories devised. But here’s the rub: they switched their official headquarters to Luxembourg – a favourite location for many corporate tax-dodgers.

Samantha Cameron’s family are already very familiar with such methods. Her mother, Lady Astor, is the founder of luxury furniture firm OKA DIRECT. She has 22% of its shares, in the company with £5.5m assets and £1.6m profits last year. Some of her customers were Tory MPs caught up in the expenses scandal, which revealed OKA was a favourite source of furnishing their second homes – paid for by you and me! But 50% of OKA’s shares are owned by anonymous shareholders through accounts in Guernsey – one of Britain’s many offshore tax havens.

And to complete the family circle, David Cameron’s father-in-law, Viscount Astor, has a family estate of 19,000 acres on the isle of Jura. Up until November 2014 it was owned by Bahamas-based Ginge Manor Estate Ltd (named after the Astor family home in Oxfordshire), but then transferred to a company based in the British Virgin Islands – another British Caribbean tax haven. No cash was involved in the transfer, meaning it was purely a tax dodge.

The growth industry that is tax-dodging for the ultra-rich is not the sole preserve of one rogue bank, HSBC. On the contrary, they are a small point on the tip of a monumental iceberg. Some experts estimate a quarter of the world’s wealth is held in offshore accounts, purely to avoid paying domestic business and income taxes. And over two-thirds of that is in British territories.

Four huge accountancy firms in the UK make a fortune for themselves and their capitalist clients by giving them expert advice on how to avoid and evade tax. One of them, PriceWaterhouseCooper, has promoted this swindle on an industrial scale, amassing a fortune for its owners in the process. They’ve just rewarded their executive board members with payouts of over £21million – an average £1.83m each. Legalised crime pays!

These accountancy firms are stuffed full of former top brass tax inspectors from HMRC, and the government hires the services of their representatives to help frame tax laws – which they help shape to suit the rich. And the accountancy firms then make money out of advising the rich on how to escape taxes…through loopholes they helped to devise in the first place!

It’s not a case of a few rotten apples in the barrel, but of a system that is rotten and class-ridden to its core.

Capitalism is a systematic swindling of the wealth created by the working class. But the rich don’t leave anything to chance. They use accountancy firms, lawyers, tax experts, banks, politicians and the laws they frame to rip the profit out of the rest of us. It’s a colossal machine constructed to redistribute wealth – away from the millions to the millionaires. And by god they’ve had some run of success!

Whilst the pro-capitalist politicians try to distract our attention from the systemic corruption that is capitalism by chastising a few individuals that get caught red-handed, the latest figures on poverty and inequality reveal the consequences, but get little publicity.

Twenty million people in Britain are now below the breadline! Poverty has doubled since 1983. 3.5 million adults go hungry to feed their children. And an absolute majority of those in poverty – 52% – are in work.

Whilst the wealthiest 1,000 people have seen their obscene wealth virtually double in the last five years, to £519billion, workers’ wages have dropped by £50 a week over the same period.

We’re told the SSP’s demand for a living minimum wage of £10 an hour for all over 16 is ‘unrealistic’. But the people preaching this are the ones who have systematically, consciously robbed society of £billions, not only through dodging taxes and buying politicians to keep taxes on big business and the rich at historic low levels, but through the entire system of profit itself.

In reply, the TUC needs to speak out in support of its own unanimously agreed policy of a £10 national minimum wage, and give a lead in demanding closure of the tax loopholes that help engorge the rich, and confiscation of the assets of companies and individuals found to have dodged taxes.

Decent wages, expanded public services and new green industry jobs could all be easily funded if the rich were forced to pay proper taxes and the current annual loss of £120billion from tax avoidance, evasion and non-payment was halted. The jaw-dropping mountains of wealth accumulated by the richest 1% – in part through this monstrous international tax swindle – needs to be redistributed, with a wealth tax and vastly increased levels of Corporation Tax.

But taxation alone cannot rid society of the obnoxious inequality that the capitalist economic system is built upon. Why should the banks, accountancy firms, manufacturing and service industry multinationals have the ability to amass vast profits, dividends and bonuses for the owners and directors in the first place – regardless of whether they fancy paying the taxes they are meant to, or not?

This stinking corruption should embolden those of us who think the wealth created by the collective efforts of working people should be collectively owned, through measures such as democratic public ownership of the banks, big business and natural resources. That way the one in three people in Britain below the breadline could be raised to a life of plenty, with socially useful jobs created and decent wages for all, including the guaranteed minimum of £10 an hour. Capitalism equals corruption and cruel exploitation to create profits for the very few. Socialism would cleanse society of this foul system.