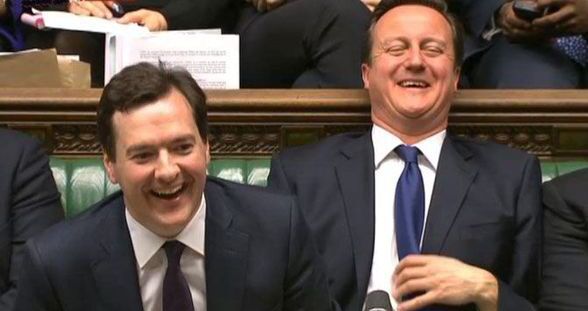 The thousands who join the Scotland United Against Austerity rally this Saturday, 20 June, in Glasgow’s George Square will be united in sending a simple, stark message to the Tories: you have no mandate to rule and ruin Scotland, and we’re not going to lie down and accept your butchery!

Only 10 per cent of Scotland’s voters backed the Tories. Yet Cameron, Osborne and their Old-Etonian bootboys plan an assault on our lives that surpasses even the Dark Ages of Maggie Thatcher.

SHOCK AND AWE
They plan a 100-day blitzkrieg on benefits, public spending and workers’ rights. Virtually every day they declare another attack on yet another section of the working class, including the poorest and most vulnerable.

They clearly hope to imitate the methods of George W Bush – who infamously deployed his ‘shock and awe’ military onslaught on Iraq – seeking to overwhelm resistance to their savagery by its sheer scale and speed.

Tory plans include £30billion cuts to public spending, £12billion of it from welfare.
An estimated £5billion slashed off in-work Tax Credits, hammering the lowest-paid, part-time workers, whilst making stomach-churning claims to being “one-nation Tories, party of the blue-collar worker”.
Abolition of young people’s housing benefit. A 40 per cent reduction of those getting Carers’ Allowance. Cuts to child benefits.
The list marches on, mercilessly.

WORKPLACE DICTATORSHIP
The same government that only gained a derisory 24 per cent of all UK voters is hellbent on wiping out workers’ rights, imposing near-impossible thresholds of a 50 per cent turnout, plus at least 40 per cent of all actual union members voting for industrial action, before it’s legal.
Plus they plan to rip up facility time for elected union reps – to make them impotent in the face of escalating employers’ attacks on workers – and to remove the ban on conscripting Agency workers to scab on strikes.
They want to impose workplace dictatorship, in pursuit of even bigger profits, lower wages and fewer jobs.

UNIONS HOLD THE KEY
With such brutality coming down the track at us, the STUC and the unions that together organise 630,000 Scottish workers have a pivotal part to play in resisting the Tory onslaught. 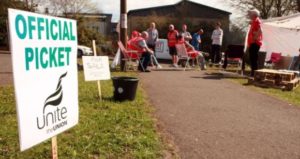 The 20 June rally must not be a mere token gesture, but the launchpad for a concerted, determined course of further action, building an alliance of trade unionists, people on benefits, communities, and socialists prepared to defy and defeat the Tories.

No time should be wasted over the summer months; as the Tory blitzkrieg unfolds, the unions should prepare the grounds for united, militant action to halt Cameron’s juggernaut.

BUDGET DAY
On Tory Emergency Budget day – 8 July – the SSP plans protests to highlight opposition to the butchery that Osborne will announce. How much more significant it would be if the STUC coordinated events across Scotland that day to give notice of the resistance that will be built over the next few weeks and months.

Potentially the STUC has unique power to spearhead a movement to stop austerity, raising concrete alternative policies at the same time as coordinating militant action.
Embracing 630,000 worker-members, it also has the advantage of not being officially tied to either the sinking ship of Labour, nor the SNP – which won a landslide by claiming to be anti-austerity, but has a real-life track record of passing on Westminster cuts at both Holyrood and council levels over the past four years.

MAKE HOLYROOD DEFY CUTS!
The STUC and its affiliated unions need to call further mass events to bombard the Scottish government with demands to implement the mandate the SNP won for being anti-austerity, by refusing to implement a single penny of the budget cuts Scotland faces from Westminster.
They should demand the Scottish government set out spending plans this Autumn that, as a bare minimum, save all jobs and public services, and boost workers’ pay – and build a mass Scots rebellion demanding the funds off Westminster for these plans, rather than devolve Tory cuts to councils, FE colleges, schools and other vital services.

ANOTHER £2-3billion IN CUTS
This is critical given the eye-watering scale of cuts forecast in new Scottish government spending projections. They expect a further cut of £2billion to Scotland’s budget over the next 3 years; maybe even £3billion. At least half of that will hit councils.
As Professor John McLaren of Fiscal Affairs Scotland wrote, “Scotland, like the UK, is only about half way through the cuts to public services initiated by the UK government. Unlike earlier years it’s expected to be day-to-day budgets, rather than capital budgets, that take the hit. At over 5 per cent in each of the next two years, the cuts could be more than double the average seen in the past four years.”

Others have calculated the councils’ share will mean the equivalent of losing 9,700 secondary teachers, plus 8,900 senior social workers, plus 16,000 cleansing department workers.

DEFY – OR DO TORIES’ DIRTY WORK
So not only Holyrood, but local councillors, face a stark choice: stand up and defy the Tory cuts, building a mass movement of workers and communities to win back the stolen £billions off Westminster – or be forever condemned for carrying out the Tories’ dirty work.

The STUC needs to launch a plan of action to push politicians into resistance, to make it politically unviable for the Tories to impose their plans. A whole nation in rebellion couldn’t be ignored.

At the first sign of any group of workers being blocked by anti-union laws, the STUC should build support for defiance of these laws. It’s better to break bad laws that allow the Tories to break workers’ backs!

How much less painful would these workers’ struggles be if the laws were scrapped that ban solidarity action by fellow-workers?
And neither Labour nor the SNP can lay claim to being on these workers’ sides.
Glasgow City Council is Labour, but has kept strikers out on picket lines for 12 weeks, as well as refusing to reinstate sacked UNISON rep Robert O’Donnell at the SECC, which the Labour council owns 91 per cent of!

The SNP government is heading towards privatisation of the Clyde and Hebrides ferries, as they did the Northern Isles ferries back in 2012.

The unions need to spearhead an independent political alternative that defends workers’ rights and incomes. They should stop funding Labour’s anti-working class lost cause; they should instead stand on the socialist principles of labour movement pioneers.

SCRAP THE COUNCIL TAX & DOUBLE THE MONEY!
The SSP has pioneered proposals that the STUC should take up and popularise; a fully-costed alternative way of funding councils, scrapping the unfair Council Tax, replacing it with an income-based Scottish Service Tax that would make 77 per cent of Scots better off, and literally double the funds for local jobs, wages and services.

This proposal has the potential to help shield Scotland from austerity, especially as councils employ 247,000 workers and provide vital services.
Councillors – Labour, SNP or Green – face the stark choice of helping to build centres of resistance to the Tory austerity plans, building alliances of workers and communities to win the necessary funding, or they will be cursed for being central to the savagery of job losses and service decimation.

POWERS TO PROTECT WORKERS
But the issue of austerity cuts goes far beyond the boundaries of councils. The SSP appeals to trade unionists, community activists and their organisations – including the STUC – to join our campaign for powers to protect the Scottish working class to be devolved to the Scottish Parliament.

In facing the cataclysmic Tory attacks on jobs, wages, benefits and workers’ rights, we demand devolution of the powers to reverse all welfare and benefits cuts; to defy pay cuts by implementing a Scottish £10 minimum wage for all aged 16 and over; to repeal all the anti-union laws and establish full workplace rights; to take all services, banks, energy and big industries into democratic public ownership, so as to create well-paid, secure jobs and begin to build a society that matches the needs of the millions, instead of the millionaires.

Join the SSP; help commit your trade union, your community group and your family to defiance of the Tories, and to the pursuit of socialist measures that could eradicate any and all excuses for cuts.
We live in an immensely rich nation: demand use of that wealth for the working-class majority population, not for the profits, perks and privileges of the stinking rich and their Tory henchmen.